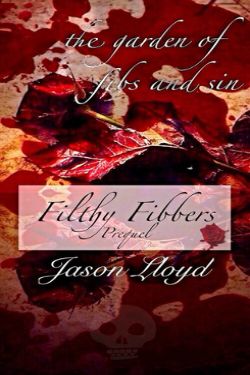 Stop by On Top Down Under on June 12th, when Jason Lloyd will be stopping by to give our readers a chance to win an e-copy of Filthy Fibbers!

This Filthy Fibbers prequel rewinds one day before Danny’s disappearance. Danny rendezvous with his ex-boyfriend, has a tryst with a new secret lover and receives threatening messages from an anonymous stalker that wants to destroy him and everyone he loves. Danny has had a privileged life and now his world is about to change forever. 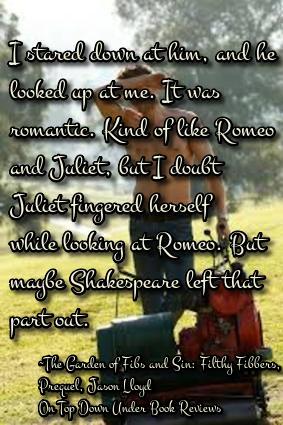 Danny Darling is a jerk. No, really. He is. Ask him and he’ll tell you. He’s rich, spoiled, and doesn’t really care much what others think. He has a small group of friends who may or may not really despise him. He has a strange mother, a sexy gardener/pool boy and a former boyfriend who suddenly makes an appearance after being gone for a few years without a word. Oh, and then there’s the secret lover who wants more than Danny might be willing to give. Danny also has a secret. What secret, you ask? Only a few know and Danny’s not telling.

Occasionally I had to take a date to Starbucks the next morning because I forgot their name. Oops.

One night Danny disappears after gettin’ busy with his secret lover. Was the secret lover responsible for his disappearance? Or was it the paranoid ex-boyfriend who swears someone is out for revenge for whatever bad thing is in his and Danny’s past? Or maybe it was the creepy guy who showed up at the club where Danny and his friends frequent. Whoever is responsible for Danny’s disappearance not only knows the secret he and the ex share, but they also stalk them both with creepy texts and phone calls. 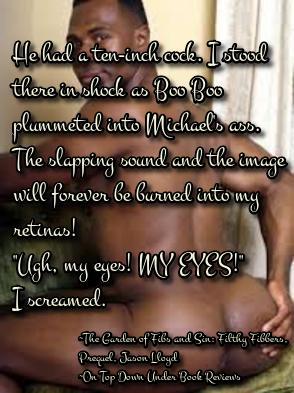 The list of suspects is a mile long. It’s not like Danny has gone out of his way to be nice to anyone unless it would benefit him in some way. Hell, even the ex became his boyfriend after Danny called him Gimp (you’d have to read the story to know where that came from).

What will happen to Danny? Will he be found before it’s too late? Or will he be left to die at the hands of the person or persons who have finally had enough of the little rich boy? I, for one, can’t wait to read the next book. This one will leave you hanging, but it will also make you eager for Jason Lloyd to get to writing and publishing already. 🙂

It’s no secret that I’m a fan of Jason and his goofy humor. I discovered him as a result of reading Salty Aftertaste and Queer Dirty Laundry, both of which are about Jason and his crazy (but lovable) friends. We can’t forget the very NSFW interview between Jason and his best friend Kevin during On Top Down Under’s 2nd anniversary celebration. I believe this is his first time writing fiction and I really enjoyed it.

It has the humor expected from this author.

Sure, I could block him from Facebook, unfollow him from Twitter, ignore his phone calls and texts, but I could never un-lick his asshole.

(I think that quote also falls under the pervy category….) 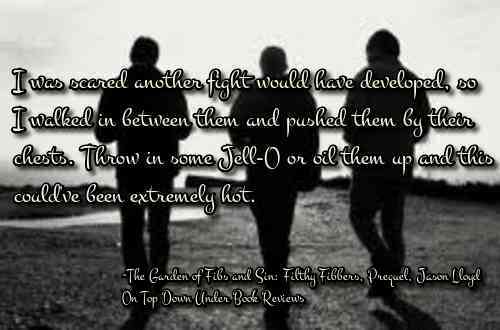 It has the pervy and naughty sex scenes. It also has the creep factor thrown in about the stalker and Danny’s disappearance. The mystery is a real mystery because Danny is not loved by anyone really, except maybe one particular character, but even they might just be pretending to to keep him from suspecting anything. It’s a very entertaining and quick read. I can’t wait to read the next one.

I love it when I see ‘this review is NSFW’

I think Shakespeare DID leave that part out and I pissed myself about not being able to ‘un-lick his asshole,’ bahahahaha. I have to read this book.

Awesome review, Cindi. Glad you really enjoyed the hell out of it 🙂

I really did enjoy the hell out of this book. I can’t wait to see what happens to Danny in the next one.

There were so many quotable lines in it, not to mention the GIFs and pics I could’ve used. Jason is a naughty, naughty boy. *grin*

Thankx so much Cindi! It’s great when someone gets your dirty humor. You should hear the things I say on a daily basis. Haha.

I read Salty Aftertaste and Queer Dirty Laundry, so it wouldn’t take much to imagine how your dirty humor is in the real world. 🙂

You’re very welcome. It’s a fun story. I look forward to the rest of Daniel’s adventures.