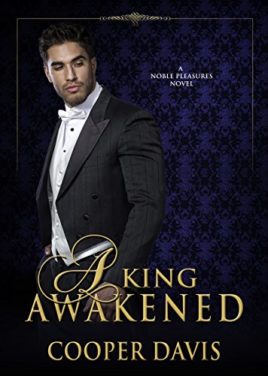 When a king finally indulges his most forbidden desires, after a lifetime of denying his hidden nature, an unstoppable passion ignites. One that can’t be denied…no matter the risk.

When King Arend Tollemach contracted a concubine for a year, he insisted on one thing: he’d never fall in love. Ever. Not with any man, and certainly not his paid lover.Unfortunately, Arend’s heart proves an unruly subject, surrendering quickly to his bed servant. The only problem? Falling in love just may cost Arend far more than he feared: his throne.

Julian Baribeau spent ten years training at a discreet establishment, one known for grooming aristocratic bed slaves. In all that time, he longed for only one thing: love in the arms of a nobleman, one who would ultimately claim him as husband. So, when he’s made King Arend’s concubine, his dream appears near fruition. Until he learns that Arend long ago swore off love, vowing he’d never open his heart again.

Despite his past, Arend finds himself in a dangerous free-fall, making Julian even more determined to find a permanent place with the man he’s fallen for. But when Arend’s council insists that he take a new queen and sire more heirs, Julian must battle far more than his king’s guarded heart.

This book finally arrived. Halleloo! I’ve been waiting for A King Awakened since I placed the pre-order in 2016. I devoured it so the wait was worth it.

I loved King Arend and the gorgeous Julian Baribeau’s burgeoning and complex romance in A King Undone. It was a slow burn, and tease, and the writing is literary alt-historical at its absolute finest, complete with beautiful eroticism. It is beautifully crafted and written, matching the story being told with a vivid period narrative. The MCs had depth and made me fall for them both but I have a special part of me reserved for Julian. Kind, caring Julian. King Arend’s growth also made me incredibly happy. The political machinations and frustrations were brought forward and heightened, but the sumptuous romance arc continues to dominate the pages.

The well named A King Awakened picks up immediately after book #1, just after Arend and Julian had finally been intimate, the momentum of their feelings building. They are staying at Ferndale, the estate of Arend’s cousin Samuel, the Duke of Mardford. They are preparing for a weekend party with some of the Lords’ Council members, but only two Lords show at Ferndale – Viscount Colchester and his younger brother, Lord Vincent. There are sincere apologies about the lack of attendees from Colchester and barbed platitudes from Vincent. Arend and Alistair, as well as Samuel, believe the lack of turnout is because of the draconian edicts the Council are attempting to put in place to make the King marry another woman. Also because of the rumours Vincent is keen to talk about; that the King has a younger, exotic – and very male – concubine. 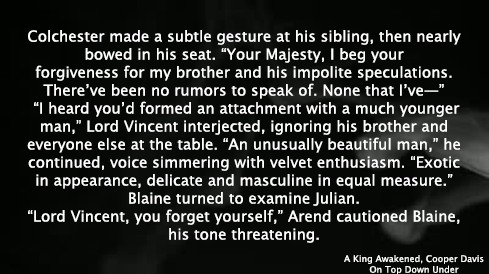 Ferndale should be a good place for Arend and Julian to be together at this time, especially given Samuel’s… liberal ways. It is to a degree. Arend and Jules are slowly working through Arend’s fear of complete intimacy and Arend is increasingly head over heels with Julian. Alistair Finley, Arend’s seemingly stuffy secretary, but ever-loyal step brother, had concocted a story that Julian is Julian Baribeau, a well heeled Agidarian horse breeder come to study the royal stables. It seems a likely reason for Julian to be part of the King’s entourage. It is true that Julian is from Agidir, as was Prince Darien, Arend’s first love, the one he wanted to marry. However, his betrothal to Darien was dismissed by Arend’s father and Arend was made to marry a woman and produce an heir. His heir, however, is gay, and Arend refused, still refuses, to subject his son to the same rules that made his own life so miserable – marrying someone you are not able to be attracted to. He knows too well what personal sacrifice that entails, the loneliness, anger, resentment, no meaningful love or love life, the taunts. Now it places Arend back in the same positon, only this time it’s the Lords’ Council pressuring. They want contracts ratified to force Arend’s son to produce an heir through a princess consort, to sterilize Garrick so it’s only the Tollemach bloodline possible on the throne. If not, Arend himself must marry and produce more heirs. So much duty is again riding on his shoulders. He has Julian and he is happy for the first time at nearly forty two, but court seems rocky. How can he get what he increasingly wants and needs – to marry Julian.

Initially, Arend is fearful of losing the rule of House Tollemach, and equally frightened of losing his 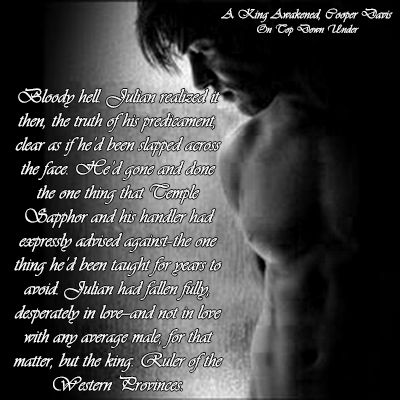 beloved Julian, perhaps more so than the throne. His deceased wife and father dog his thoughts and beliefs. The edicts dredge up old wounds of the death of his first love, fears of similar endings for his second, which paradoxically immobilise him and make him dangerously passionate. He has tender moments and speaks of great intimacies, interspersed with peaks of jealousy and reckless behaviour. He reminds Julian of their contract of one year. Telling Julian that the tupping was satisfactory and worth the fee paid, leaving Julian confused because he feels in his heart that what they have is more than King and Concubine. That what they are is both physically and emotionally bound. On occasion Julian makes sure to let Arend know he sees through the ‘satisfactory’ comments with a bit of teasing and resourcefulness of his own. However, Julian has been hurt and betrayed in his life. He’s a positive man, but he has his limits too. Arend thinks if he keeps up the walls, parting with Julian won’t be as bad or as hard, but who is he kidding?

Arend’s jealousy is his undoing. Lord Vincent chasing after Julian at Ferndale, treating him like a piece of meat, noticing the King’s reactions and baiting him, is too much. Arend is not very worldly when it comes to romance and he reacts like a younger man at times. His jealousy is a point in case. It causes Finley to announce that Julian is his paramour to save the King from himself. Then Arend irrationally announces that he will take a queen by summer’s end. Those words and promise to other lords are akin to a concrete agreement. One that Julian and Finley, and ultimately Arend, team up to set about undoing. Damn the edicts – he is the King and he loves Julian. He also loves his son and his son’s husband, and he won’t stand for this bullying.

In A King Awakened, Julian and Arend finally get to the point where they’re both prepared to be vulnerable with one another, eventually airing their fears and their past hurts to each other and to us, the reader. They lean on each other after initial uncertainty. Once Arend decides that all and any intimacy is beautiful if you desire it, things change. He also decides that the best defence is a good offense. He is pleasantly surprised at the support he has as the King of the Western Provinces.

I unreservedly love this series. I am now reading the next book in the series because, once in this 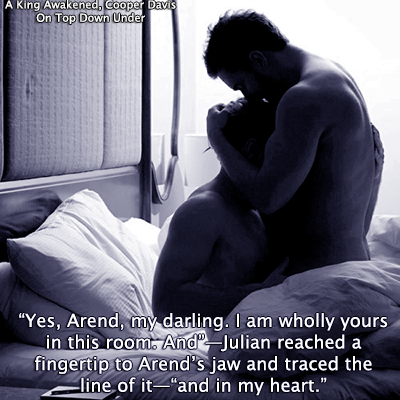 world, I don’t ever want to leave. There are plenty of characters and stories to be told too. Alistair Finley needs to believe in himself, he’s a good man, and allow Lord Marcus in. Samuel and Lucy and Cochester…well, let’s just say I’m incredibly invested in what happens with them. I can’t wait for that book either.

If you love beautifully crafted, beautifully written and sensual alt-historical books, literary in quality, with wonderful characters who are full of emotion and passion, then I highly recommend the Noble Pleasures series. Start with A King Undone, as A King Awakened is part two of Arend and Julian’s romance and love story. Sublime from beginning to end.  5 Stars!

What a great review. I know how eager you were for A King Awakened to be published. I’m so glad it was worth the wait. I can’t say enough about how much I love the visuals.

I was very eager and it delivered. Now I’m reading the next book. Yay.

Thanks, Cindi. It’s hard to do pics for alt-historical/historical books.