All That Drag, Jess Whitecroft 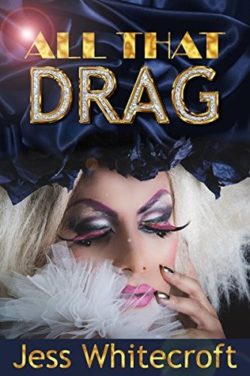 When Adam’s college boyfriend Ryan refused to come out for him, the breakup left Adam so devastated that he invented an alter-ego to cope. Whenever he puts on the wig, the lashes and the heels and becomes acid-tongued drag queen Bunny Boyle, Adam feels invincible – ‘a superhero in lipstick and Spanx.’

Fast forward over ten years and Adam is running a failing drag bar in Pittsburgh. Gnawed by financial woes, not even Bunny can save Adam from the increasing loneliness and anxiety he feels, a situation not improved when he walks in on Ryan – now a high school athletic coach – boning Justin, the bartender.

And Ryan’s still in the goddamn closet.

As Adam’s mental meltdown approaches Arctic proportions, Ryan finally kicks open the closet door, forcing them to confront the feelings they thought they left behind over a decade ago. There’s just one small problem – Ryan’s no longer single.

Bed-hopping, beaded lashes and scandalous behavior – it’s all here in this raunchy comedy about second chances, true love and the vital importance of looking sickening.

Ryan Kantner is a teacher at a Catholic high school in Pittsburgh, and one night when he’s out with some of the school dads he ends up at FuBar, a local gay bar. The dads think it’s hilarious because drunk straight guys in a gay bar with drag happening, well, it’s such a winning combination. There is an upside though, Ryan gets hit on by the cute barman, Justin, who is happy to tell him just how pierced he is and where. Justin is very flirtatious, sexy, younger and Ryan is now feeling cruisey and horny. There is a drag queen up on stage in a banana dress serving up some humour, the drinks are stronger than beer, the backdrop is set. The dads go and Ryan ends up in a room upstairs fucking Justin when Bunny Boyle, aka Adam, walks in to grab some keys – Justin has never heard of locking a door – and, surprise! Bunny’s first love is balls deep in his employee. But it’s cool. It’s okay. It’s fine. Ryan was over a decade ago and Justin is fun, has fucked half of Pittsburgh – if not most of it – including Adam. So, whatever. They’re adults, right? No big deal.

Adam Berkovich, aka Bunny Boyle, lives with Stephen, aka Helen Heels, and Justin at the property 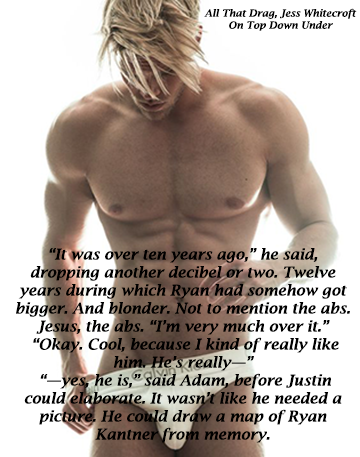 Adam bought with his inheritance that is now FuBar, a struggling gay nightclub. Bunny and Helen – Adam and Stephen – are best friends and have been since a pageant and a toe in some Amaretto made them inseparable. I’m looking forward to more of the Amaretto Toe incident in the next book – Helen is currently having her story written right now. Yesss. Helena, as Bunny calls her, is sweet and believes in love and romance and good things. Bunny is more acerbic, full of quips, and has given up on love since Ryan and he split up. But Adam’s Disney Princess friend, who silently turns up behind Adam when he least expects it, is always there with loving support. They are a drag family, one which grows some more when nineteen year Luis, or Miss Rose, ends up in their lives. Luis may have been there to score weed for his sick abuelita at first, well, kind of, but he has some excellent budget drag dress ideas and he can sew. Mostly, he really needs some family.

“You know how it is with us girls,” said Bunny. “I hit thirty and got broody. It’s not easy outrunning your biological clock at the best of times, but it’s a damn sight harder when you’re wearing four-inch heels and the end of your dick is duct-taped to your ass crack. Nature called and she was like ‘DING DING DING – TIME TO BECOME A DRAG MOTHER, BITCH!’”

I know this is Adam and Ryan’s story – the New York theatre major and the Iowa jock – but Ryan and Justin start everything off in this second chances story with their friends with benefits arrangement. Although the guys have nothing much in common except sex, and Justin is clueless, he is a turbo charged adventurer in bed as well as sweet. It’s easy for Ryan to be with Justin. Ryan doesn’t need to be out of the closet for him. Justin is perpetually horny and Ryan can scratch both of their physical itches and come and go without real-world expectations. Mind you, we all 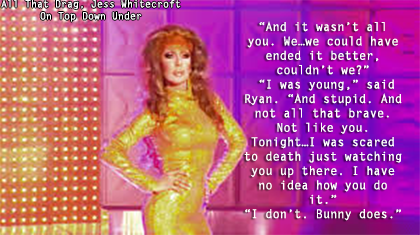 know that part of what keeps Ryan coming back is Adam, even though quite a portion of the first section of this book is more or less spent with Ryan and Justin hooking up, being exclusive. It shocks the shit out of Adam and Stephen – who knew Justin could say monogamous let alone be monogamous? Justin, allowing regular and easy sex with Ryan, is a catalyst for him to think back to when he and Adam were nineteen and lovers at college. What it meant to him, what Adam meant but he couldn’t say. That he really hasn’t forgotten him or stopped caring for him. Loving him. However, that train of thought leads to requiring a Casablanca Victor Laszlo/La Marseille moment, and he isn’t feeling like coming out of any closet as a teacher at a school he can be sacked from.

Before too long, Adam ends up in a ménage with Justin and Ryan. Yes, it’s a possible hot mess waiting to happen, emotions and attachment and all that jazz. Stephen is worried about it, Adam is worried about it… but the sex is great. Justin is fun with his small but sporty dick, his insatiability, and his powerbottom ways, and Ryan… Ryan is too much to resist. Adam puts boundaries in place to try not to allow things to get messy but with his feelings for Ryan bubbling just under the surface, Ryan’s feelings the same, it’s a distinct possibility. Kudos to Ms Whitecroft for taking a slightly unconventional route with the love in this tale and not making it drama-filled. People are actually adult about a lot of things here, to be honest. Crazy at times, but adult.

This is one funny book. It most definitely and comfortably falls under the tag of romcom. It’s also a hellishly sexy read – it’s seriously and inventively sexy. I guess you have to be into ménage. You probably also need to be okay with the fact that there are relationships outside one person + one other person = the only relationship model to get the most out of All That Drag. Although **spoiler alert** it ends up being about the true love between Adam and Ryan and I enjoyed the scenic route it took.

All the MCs are lovable. All the primary secondary’s are the same. They are three dimensional and real-feel people doing some average things, other things that are crazy-fun, and some that help them stick their middle finger up at the man. But mostly it’s Adam and Ryan getting a second chance at love. Then there’s Adam’s alter ego Bunny taking centre stage when that inner bitch wants to play or there is too much vulnerability looming. Poor, poor Stephen having to counter snippy Bunny when he’s trying to reinvent the bar with burlesque nights, sports trivia nights or anything Bunny does not approve of in a gay bar. The back and forth banter with Sinead about the (non) merits of burlesque made me laugh. Bunny and Helena are so tight, so loyal and honest to  and with one another. And they’re fun.

Some beautiful memories, thoughts, feelings and emotional depth are smattered throughout the writing, giving emotion and connection. Building toward personal realisations. Then there’s the perfect movie references, like Casablanca, Moulin Rouge, Pink Flamingos, that would make any queen proud of the on-page herstory. There’s also the ‘we think being PC stamps out our rights’  brigade, proudly representing arseholes worldwide.

“I’m sorry,” she said, in a tone that was more defensive than apologetic. “I’m too old to get on board with all this political correctness. You know me. I’ve always said what’s on my mind.”

As per the other books I have read by this author, the social commentary is strong. It fits beautifully within the narrative, only occasionally getting a bit feverish, but we live in times where voices need to be heard and Jess Whitecroft raises hers in her art, much like Casablanca was more than just a good movie. And Casablanca is definitely the theme of this book.

“Well, well,” said Adam, filling Ryan’s glass again. “Of all the broke-ass drag joints in all the towns, in all the world, you walk into mine.”

If you enjoy a bit of drag, some sexy times between fantastic characters with chemistry, this is such a good book. It’s fierce and it’s glittery and it’s filthy. Jess Whitecroft is a wonderful creator of meaningful  and sexy contemporary romance with memorable characters. The ménage is awesome – Bunny showing up at the bedroom door in pink drag and lacy undies. Oh, and the heels. The effect on the legs – those feet and legs in shoes

wrapped around Ryan, which he loves, is mmm, mmm,  freaking hot. The book is also socially satirical and witty and clever and I clipped the living daylights out of it. On Goodreads there are a lot of direct quotes in status updates as part of my review, check them out and see what you think. This book is a joy. If you like contemporary gay romance, if you like some sexy times with great heart, drag queens, wit and current social observations, if you’re like me and enjoy perfectly placed iconic culture, then All That Drag is damn good reading. Go grab a copy. 5 Stars!

Our Tumblr for one extra pic 18+ only. Totally NSFW

I love a funny and sexy book. I’m not sure how I’d feel about the Justin thing but from what you’ve written, I can tell I’d probably get over that pretty quick. I love humor in my books and this one looks perfect. Great review. And those visuals? Wow. 😉

Yes, some readers maybe won’t be so sure about the Justin ménage thing but it works because of the characters and the writing.

It is funny, I laughed out loud on numerous occasions, and I was completely hooked. I’m glad to know Helena is getting a book.

I’m feeling all the love for Bunny Boyle and her drag momma ways. Can y’all say Lady Bunny. Fab review. ????????