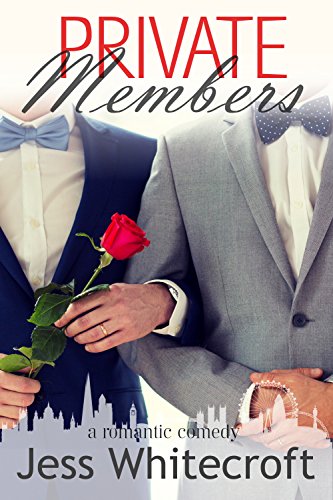 When the kinky, charismatic Derek offers to make amends in the shape of drinks, dinner and rough sex under his desk, Toby finds himself not only in love but moving in the kind of exalted social and political circles he has previously only dreamed about. The two dive into an absorbing and inventive affair, but when an accident brings all of Toby’s protective instincts to the fore, Toby begins to worry that maybe he is – as Derek often says – a bit too nice for the backstabbing, rumour-mongering and quid pro quos that make up the daily grind of Westminster.

Derek Waterhouse is an up and coming left-of-centre shadow MP who’s tipped to be the next leader of his party. If so, in his late thirties, he’d be the youngest. He went to all the right schools, has the right friends, is very charismatic and handsome. He is also openly and proudly gay, which is seen as a positive to the party machine in contemporary England, although he isn’t much for actual relationships. In every way, Derek seems quite the political animal. Although a Bill the Tory’s are tying to push through, one that downgrades aged care, means a lot more to Derek than any others. It also starts a number of situations, both personal and professional, in motion.

Toby Green is the antithesis of Derek, he has love handles to Derek’s long and lean body, he’s hirsute to Derek’s smooth body, he’s quiet and steady. His friendship with Cerys, a dominatrix to any number of British politicians and the upper crust, is a definite anomaly for seemingly vanilla Toby. He enjoys being in a loving relationship, although his two main partners were not so loving. He’s not a backstabber, he’s more of a nurturer. He used to be a political journalist but an interview with Derek Waterhouse effectively ended his career when the MP denied what he’d said to Toby. Now, Toby writes a political blog that not many people read. Oh, and he writes kinky tentacle erotica. What’s a writer to do when he isn’t doing what he thought he would prior to that interview?

When Derek initially turns up at the Arse End –  a pub Toby and his bestie Cerys frequent and nicknamed for its proximity to parliament and politicians – well, let’s just say he still doesn’t do anything to change Toby’s viewpoint. On their next encounter at the Arse End Derek is suddenly different. He’s interested in Toby, exudes charm and hits on him. They end up hooking up and the sex is good, really good, perhaps better than anyone actually anticipated. My jaw dropped a little as I found it hard to believe Toby would jump into bed with Derek so easily but, prior twat or not, Derek can be an incredibly persuasive and charming person. Toby also really can’t deny how hot he is.

Soon after the hook up, Toby finds a leaked document in his email that is straight from the Health Minster’s office. Surprise! It’s warts and all information about the aged healthcare bill. It’s a gift and he can’t believe his luck, although he suspects that Derek had something to do with it. Derek skirts around it in a, who moi? kind of way. Nevertheless, this leak puts Toby back on the journalism ascendancy, with the BBC, the Guardian and other online media interested in him and his scoop. So, political journalism firmly back on the radar, and sex with Derek being nothing if not interesting and extremely hot – whether it be more vanilla or with pegs, floggers and spankings sometimes in the mix – Toby’s lot is looking up. But is it what he really wants? The politics. The journalism.

Private Members is told from Toby’s POV, except for the epilogue, and Toby is a nice character to enjoy the ride with. I hoped he would get what he wanted in his relationship with Derek. There is a long standing joke throughout that Derek will find out what pseudonym Toby writes under, he’s intrigued and turned on by the thought of Toby’s sexy tentacle erotica.

“Suckled By The Giant Squid,” he said. “Was this one yours?”
“Nope.”
“Dubious Consentacles?”
“Yikes.”
“I’ll take that as a no,” said Derek. “The Girl With The Tentacle Tattoo? Booty Call of Cthulhu?”
“Nope and nope, although I always wished I’d come up with that title.”

This is a fun read, complete with pop culture references and pollies in the mix. The usual  snark, observation and humour of Jess Whitecroft is definitely on display. This time the setting is

England with Brexit and Tory politicians copping some slapping about. Ms Whitecroft’s ability to make the central romance feel personal and emotional but not heavy is also part of the mix. Underneath the romcom is the sadder subject of dementia – the familial early onset kind – which  gave the book extra depth. The sex is pretty much on the mark – neither too much or too little – which I think is very important for a contemporary romance. The characters were interesting, three dimensional, and I really liked them. I thought Cerys was a fabulous, if not underutilised, character.

Yet another solid romance by Jess Whitecroft. A different setting and different characters to her others so far. JW is well and truly cemented as an auto-buy author for me now. 4 Stars.

Dubious Consentacles. Now that’s a best seller if I ever saw one. Baha! This looks like such a good book. I tend to avoid books about politics like the plague (we get enough of that in the real world) but this looks different. I love the last quote and GIF. Beautiful.

I know, right? The various tentacle titles were so funny. The last quote is lovely.