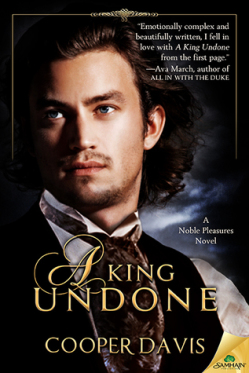 Sometimes you have to risk everything, to follow your heart.

In a world where gentlemen openly court and marry fellow noblemen, the threat of scandal still lurks behind every velvet drape for kings and princes. Such has been the fate for King Arend Tollemach, forced to sacrifice his heart on the altar of regal duty.

Now that his wife is dead and his royal obligations are at an end, he s ready to take an unthinkable risk. King Arend seeks a concubine from Temple Sapphor, a secretive, gated world where he will finally shed his virginity as least as it pertains to making love to a man.

Julian never thought he d spend ten years on the temple shelf, passed over again and again. Just when he despairs of ever finding placement in a nobleman s bed, Arend walks into the temple. A lonely eyed, beautiful king who could easily steal his heart.

Arend discovers he has no problem opening his bed to the exquisite concubine. The problem lies in finding the key to his long-shuttered heart.

King Arend Tollemach is forty one years old, his wife is deceased and his son, Prince Darius, is recently and happily married to Prince Garrick. It’s time to think of himself after years of duty; being forced by his father to leave his love, Prince Darien of Agadir, marry Lady Cordelia in order to fulfil his family’s  expectations, and, most importantly, to sire children to carry on the Tollemach name and royal lineage.  Because he’s now free, and wants to be intimate with a man for the first time in his life, he contacts Temple Sapphor to find a courtesan to help him learn what he needs. After an e-hamony-like questionnaire is sent to him, which Arend duly fills out with much tension, the day arrives where he is to meet the sort-after men of the Temple.

Females do not– He hesitated, tapping the page with his pen until a soaking stain of black bled out. Females have never aroused me. I am a virgin as regards male sexual acts. Hoping concubine may… instruct me. Teach me. Will require some patience initially.

Right from the first meeting at the Temple gates, Arend knows the man guiding him through to the viewing, talking to him with a more effeminate lilt, will be the one he chooses. Julian. Julian is blonde, more feminine yet a Temple warrior and a trained concubine. And Arend knows Julian’s eyes.

Those eyes! By the devil himself, they were Arend’s fantasy, the ones he’d dreamed and mooned about for days on end.

They are beyond alluring, much like the rest of Julian. Arend wants a no-strings attached concubinage with Julian, but you know that is never going to be the case. It may initially be those eyes, that body and face, but it becomes apparent that Julian is so much more than an outwardly pleasing aesthetic.

Julian has been passed over for ten years, since his brother originally sold him 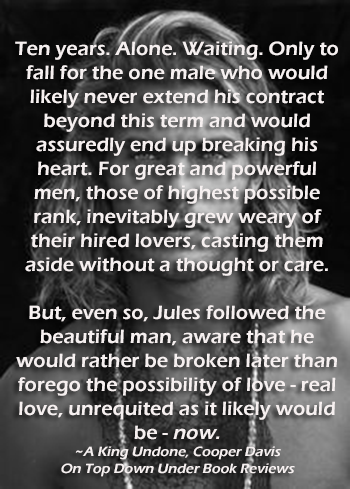 into the Temple’s ranks. Not a lot is given about Julian’s past, but he is more than he seems on the surface. He is polished beyond mere Temple training, with talents that have yet to be fully explored. The fact he also comes from Agadir – where Arend’s first love came from – is interesting. I adored Julian from the first time he spoke. When he asked King Arend to consider him kindly at the viewing? I was a goner. As the book continued I fell under Julian’s spell even more. He is gentle, without being a pushover, kind and caring… and genuine. He is hard to resist. He’s been passed over because his voice is not so manly. But in the house of Tollemach, even married-to-the-job and stoic Alistair Finley, the King’s personal secretary and foster brother, can’t help but like Julian. Arend may ask for more manly demeanour but he loves Julian’s voice and carriage.

King Arend really has done his duty. Has lived the life mapped out for him. Had his heart broken over his father’s behaviour around his first love which resulted in Prince Darien’s death, and he still carries the prince’s photo in a pocket watch.

“Darien, my darling,” he murmured, his shoulders bowing. “I am so sorry for failing you. I shall always love you, always. But I must…” He couldn’t bring himself to utter the words – yet even unarticulated they remained true.
I shall always love you, but I must now be free to love again, finally free to love another.
The admission was the most he could brave right now.

His marriage to Lady Cordelia was not only loveless, it was bitter. He is uncertain how to love and convinces himself that a twelve month concubinage will give him  sexual enjoyment and education about sex with a man, he can then move on. Good luck with that, Arend. He knows that but a contract gives him illusions of detachment. As excited as he is, he is scared of sex with a man. At 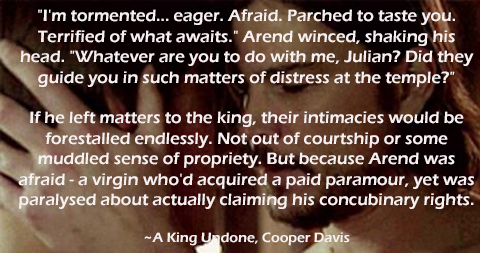 forty one he has had no same-sex experience and very limited sex with Cordelia. He is totally unsure of himself. His father’s disapproval rings loud in his ears. But he kisses Julian and that is pretty much the end-of-the-end for the King. He tries to place the sensual Julian at arms length sexually and emotionally, but he finds that very difficult. However, the Lords Council is lurking in the background and Alistair advises him to send Julian back to the Temple – or set him up elsewhere – before Julian is hurt in royal/political machinations. Arend has strength but is also vulnerable, two appealing characteristics when thrown together in one person. Arend needs Julian as much as Julian needs Arend.

Jules held his breath as the monarch moved much closer, fixing him with those blue-grey eyes. “In your arms, Julian,” the king pronounced quietly, “I shall become a man.”
With all the practice and skill in his arsenal, Jules moved closer. “You’re most thoroughly a man, my lord. That’s patently obvious -“

I loved A King Undone from the beautiful cover and title onwards. For that’s what Arend is, a king undone – by a continued sense of duty, his dead father’s actions, by the Lords Council’s cruel and intrusive missives. Then there’s wanting to be free and having beautiful, darling Julian in his arms, but not quite knowing how to deal with that emotion and attachment.

The painful truth of it was that he’d never fulfilled any person’s emotional expectations, save one. And that man had died with their shared love unconsummated.
Arend would be damned if any male ever attached significance to his affections again, not when the last to do so perished as a result.

But he learns that Julian not only wears his heart on his sleeve, and he does, but he’s there for the long haul, both in the bedroom and out of it.

I admit to having an absolute love affair with this alternative-historical style of writing; the calibre is high, brimming with beautiful prose, sweet endearments, tension, humour, and they are romantic. A King Undone is all of these, and one of 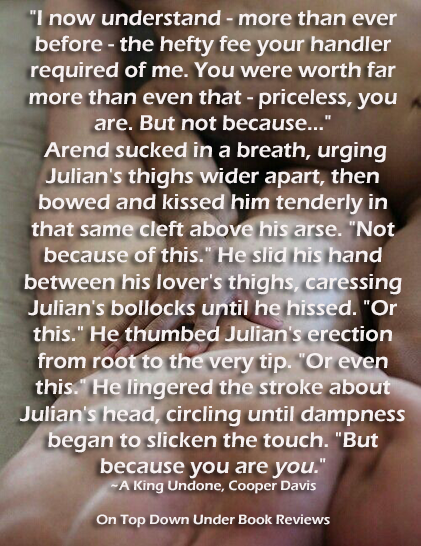 the most romantic books I have ever read. There’s a slow burn and a great deal of  sexual tension and when Arend and Julian finally consummated their relationship,  it was beautiful and worth the wait – I had tears rolling down my face. I loved how Cooper Davis wrote Julian. I do enjoy more outwardly gay  characters, and while Arend doth protest too much in the beginning, he knew (and we knew) he loved that about Julian too. As someone who has read and loved the Chronicles of Ylandre, the Order of Solace, and also the Sci-Regency series, I can say that A King Undone is in a similar vein. If you like them, I believe you will like this book too. While it is book #1 in a trilogy, and has a decent HFN, one of the bonuses of these alt-historical novels is you can have an open and genuine HEA. I’m banking on that for Arend and Julian next book. They are now added to the list of my all-time favourite couples. My only complaint? Nine. Long. Months until book #2. I am gutted to be away from them for that timeframe. 5 Made Me Cry Stars!

“I mean to keep you, and my commitment to you, Jules. I will stand by the vow our concubinage represents.” He drew a shaky breath. “For our year, I will find my way against the Council. Fight my way against them, thwart their plans, and win.”
“I’d like to bed you now,” Julian said plainly. “Have you bed me, rather…”

Talking to you behind the scenes, I knew you loved this book. After reading your review, I love this book. I am in love with Julian and I only know him from your review. Beautiful photos and quotes. I’m adding this to my TBR and hope to read it soon.

Don’t you hate finding the perfect book and having to wait on a sequel? When it comes out, it will be that much sweeter. 🙂

I really did love this book and, yes, you copped an earful behind the scenes 🙂 You have to discuss good books, don’t you? I know you would love Julian. He is wonderful and so is Arend. I just loved them together – hmm, the word “love” is freely thrown about. I must find a new word.

I am NOT looking forward to waiting for the 2nd book. Did I tell you I am a very impatient person? VERY! lol

WOW!! What an incredible surprise! This review made me so happy when I finally logged onto my laptop just now (been traveling!) Thank you so much. I’m having a ton of fun writing the next installment, A KING AWAKENED. After that comes Alistair Finley’s story with A GENTLEMAN REVEALED. I have such a soft spot for Al. 🙂
Cindi, I hope you’ll check the book out! Thanks for the incredibly kind words. I love Julian, too. 🙂
Hugs! Cooper

You’re very welcome, Cooper. It is a wonderful book. I enjoyed myself immensely reading it. Arend and Julian, and others like Alistair, Samuel and Lucy, are fantastic.

I look forward to A King Awakened, already tapping my foot here. What can I say? I am shockingly impatient 🙂

How did I just see this! I love Alistair, in particular, but Sam–he’s such a rascal…and Lucy has the temerity to keep him in line. Thank you. This was such a wonderful review. 🙂