On Top Down Under is thrilled to welcome Jason Lloyd, who stopped by to celebrate the one year anniversary of his hilarious nonfiction tale Salty Aftertaste. Jason is giving away 5 copies of the book, so make sure you click the Rafflecopter link in this post and enter for a chance to win! Check out Cindi’s 4.5 star review of Salty Aftertaste here. 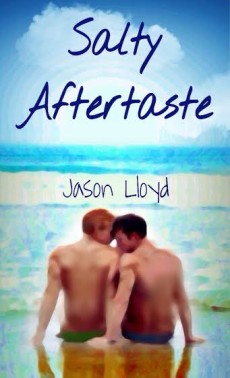 In this nonfiction tale, Jason and his hilarious and crude motley cast of friends leave their mundane suburban jungles and flock to the mecca that is Rehoboth Beach, Delaware for vacation. They are in search of a little rest and relaxation; aka beach, bars and boys, lots of hot boys.

Jason is just looking for a little attention. He just wants to feel wanted, and a little summer passion would not hurt either. Jason is the self-proclaimed hopeless romantic of the group. Will he find his summer love or is romance really scarce?

Kevin is the complete opposite of Jason. He feels that romance is only alive in stories. Kevin’s love for a teenage drama goes too far, and his obsession turns into more than he expected. Did Kevin finally stumble upon some romance or does his fascination finally get the better of him?

Bobby is looking for a connection. Any kind of connection. He meets a new guy every night and shares his bed with him. What is really going on behind Bobby’s bedroom door? Will he ever be able to fill this insatiable void for closeness?

Benjamin sneaks out every night. He disappears into the night and reemerges the next morning as if nothing had happened. He is quiet about his extracurricular activities. Where does Benjamin go? What is he doing?

In this beach oasis, where there is an endless sea of sexy men with perfect bodies, will Jason and his friends actually find love or just one night stands? One thing is for certain, it is an epic vacation that none of them will forget.

The Tricks – A Look into Salty Aftertaste

Kevin and I always meet interesting people while on vacation. I documented most these encounters in my book Salty Aftertaste. There were three ladies at the restaurant who kept buying us margaritas, a very cute Mexican guy who was in love with me, an attractive older man who handed out business cards that read “Call me maybe?” and, of course, Tony.

We all stood up and followed John in. As he opened the door, a muscular shirtless Devan walked in followed by another guy I had seen at the bar the night before. Devan took his shirt out that was tucked into his waistband and put it on. Rosie studied every move he made. There were lust and determination in her eyes. She was getting it in tonight for sure.

Devan was obviously here for Rosie, but who was this other guy and why did he tag along? Do straight men need moral support when they hookup with pretty girls? Do they need that high five after a good pounding of punani?

“You boys remember Devan from the bar, this is Tony. Tony DJs at the Blue Moon,” John said. Tony smiled hello and nodded at us.

“I liked what you played tonight,” I said.

“I wished you would have played some Selena Gomez,” Kevin jeered.

Tony was average height with very short dark hair and intense penetrating blue eyes. He had a “bad boy” appeal to him. I watched him as he took a big stretch with his arms. He stretched them up in the air over his head, and as his polo shirt rose a few inches above his short’s waistband, I could tell he was in good shape. He had that delectable ‘V’ that runs from a man’s waist down to his pubic area. He had a tattoo on his stomach, and he knew what he was doing when he was stretching. It was the “look at me, look at me, I’m really hot” type stretch.

Tony saw me staring, and I quickly averted my glance. “What’s your tattoo of?” I asked. He already caught me looking so what was the point pretending I was not.

“This one is a coy fish.” Tony lifted his shirt up. “But I have others see.” Tony pulled the collar down from his polo shirt to reveal a script tattoo that reads “Never Back Down.”

“Oh cool,” I blushed a little.

“Yeah, I have a lot. There’s a brass knuckle on my chest,” Tony said as he lifted his shirt all the way up once more with one hand. “And it says Brutal above my cock.” Tony pulled his waistband down with the other hand to reveal the tattoo in his well-groomed pubic area.

“Oh wow!” At this point, I must have been a deep shade of crimson.

After only twenty-minutes of pleasantries, (Tony showing us the remainder of his tattoos) Devan and Rosie disappeared upstairs to be alone. Devan was extremely gorgeous. The dimly lit bar did not do him justice. He had a nice body, model face and beautiful eyes. I can just imagine how much tail he gets from willing fag hags. Part of me wished I had a vagina or at least could borrow one for a night with him.

While they ran off to get off, John, Aaron, Tony, Kevin, and I stayed in the kitchen drinking our drinks and just talking. Tony was a show off kind of guy. It was obvious from his “show and tell” tattoo sharing. He was showing us modeling pictures he had taken by a photographer that he saved on his phone. Aaron was swiping through the pictures with his finger as the rest of us looked over his shoulders.

“Don’t go um, too far. There’s some on there that shouldn’t be seen.” Tony said.

Aaron, of course, hearing this picked up the pace in his swiping! Then there it was, a completely naked Tony. Followed by just cock shots he had taken with his phone. Do all gay men have cock shots on their phone? Is this something every gay man does? Exhibitionism is so early 2000’s.

Tony just grinned at us; after all, he wanted us to find them, or else he would not have handed us his phone and state there were naughty pictures on it. You could tell he was proud of his unit as he should have been. His penis was a decent size, very thick with a large vein that ran down it. I am sure he gets a lot of gay ass.

Want to win an ebook copy of Salty Aftertaste? Use Rafflecopter below to enter. Five winners will be randomly selected.

I’d like to thank my fabulous publicist, Joleen, from Parenthetical Author Services. It is a pleasure working with her. If you’re an author and need help promoting your work, email her at PAS Promotions. 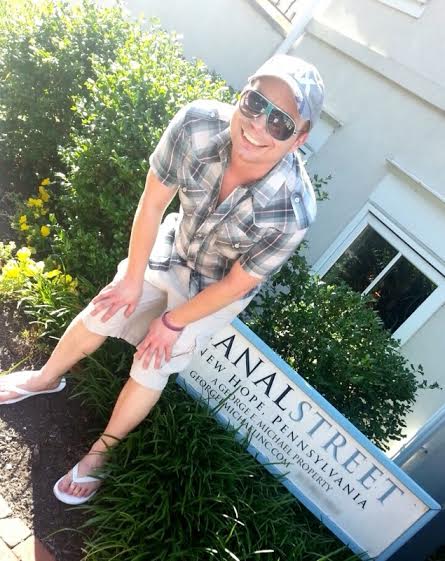 Jason Lloyd is the author of hilarious m/m romance featuring an array of interesting characters. Salty Aftertaste (Ginge Publishing, 2013) was his first creative non-fiction novel. It reached Smashwords Top Best Seller list in Gay & Lesbian Fiction and was the #5 best seller in the New Adult genre on All Romance eBooks (ARe).

His second book, Queer Dirty Laundry (Ginge Publishing, 2014), is a creative non-fiction novella and is based on his popular blog by the same name. In 2011, QueerDirtyLaundry.com was nominated for The Best of Gay Philadelphia under Best Gay Website/Blog. Jason’s blog was also in the top ten numerous times on Best Male Blogs.

Previous post
How To Train Your Dom In 5 Easy Steps, Josephine Myles
Next post
The Pining of Kevin Harding, Devon McCormack

This was one of my favorite parts of the book.

Another huge thank you to Jason Lloyd for stopping by as part of his blog tour for the anniversary edition of Salty Aftertaste!

If you haven’t read the story, I highly recommend it. You’ll feel like you know Jason and his friends before you’re done. 🙂

I agree with you girls, cocks are important.

I like an author with a sense of humour so good bio shot.