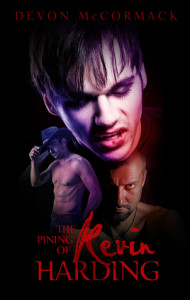 Kevin Harding was an ordinary eighteen year old boy going to school in Kentucky, doing all the things eighteen year olds do. He had just been accepted into the Steppenwolf Theatre Company. His dream to be an actor. But all of that is changed when he’s turned by ‘Master’ into a vampire. When we meet Kevin he has only been turned for a couple of months and he doesn’t like his life now. He doesn’t want to hunt, and while he craves blood, he doesn’t want to kill humans like Master, Dax and Alyssa do. Normally they bring him back someone who is dead to allow him to feed but Alyssa, Maser’s 2IC, is a sadist and doesn’t appreciate Kevin’s attitude. Master wants Kevin to vampire-up and gives Kevin an ultimatum, either hunt for himself or suffer the consequences. Dax is close to Kevin, they occasionally have sex, and they are friends so it is a given that Dax will take Kevin out for his hunt. Dax decides to take Kevin to a local gay bar (or two) he knows well and find someone there to kill and drain. However, things don’t go as planned. First of all Kevin is eighteen and looks eighteen, fake ID or not –

Jesus, I thought. I’m gonna get carded for the rest of my fucking life. I’d always have to deal with this—suspicious bouncers  thinking I was underage. I’d be one hundred years old and they’d still be asking to see my I.D.

Then Dax is captured by vampire hunters, Ride and Morgan, using bait. Kevin manages to allude them at first but while helping Dax escape he is taken hostage instead.

“At some point, you’re gonna give me the answers I want. The question is, how many limbs are you gonna lose before that happens?” Whatever, I thought. I’ll just grow them back.

But the vampire hunters have a new drug. One that burns a vampire slowly and painfully. It is used on his skin, so he knows just how painful and deadly it is, as incentive to hand over his Master. Kevin is a newbie vampire, he doesn’t need so much incentive. He doesn’t want to feel like he belongs to Master. He doesn’t want the pining to grow more and more. It helps that he doesn’t like Alyssa either. When he agrees to show the hunters where Master lives, how to get in via a secret passage, they surgically insert vials of the poison into Kevin’s body with a detonator that Ride holds onto for insurance.

For Kevin to go back to Master he has to come up with a plausible story of how he escaped, but things go awry when Master declares that he wants Kevin to be ‘the one’. He will be replacing Alyssa and he hands Kevin a ring to prove his desire for him. Tells him how long he stalked him before making a decision. That he had to have Kevin and in two weeks he will be having a party to announce that Kevin is his. While spying, Alyssa learns of Kevin’s deceit and ends up in a battle with Kevin. Kevin can’t let Alyssa tell Master what has happened. Dax gets involved when Kevin tells him Alyssa has flipped out because he is to replace her. Dax likes Kevin and helps him fight her and stash her somewhere. But it takes a lot to keep a sadistic Alyssa down. Eventually, with the help of some UV and some tasers, the vampire hunters escape Master, Alyssa and Dax as well. They take Kevin back to their home to formulate another plan to take out Master and his vampires. This time Kevin and Morgan discover that they have a lot in common. Kevin doesn’t like being a vampire and Morgan doesn’t like being a vampire hunter. Morgan has issues from the life he has lead with Ride since his parents were killed when he was young. He sees Ride as a foster parent and feels obligated to help him, likes him, but he dreams of things an everyday twenty year old dreams about.

No matter the friendship that develops, vampire hunters have to do what vampire hunters do, and Ride wants Master.  He involves another vampire hunter, Mercury, and things heat up again. Morgan and Kevin are placed in the middle of what both sides want, the others side’s death.

The Pining of Kevin Harding is not an in-depth paranormal read. There is no major world-building. I would say that it reads more like a contemporary YA novel – friendships, family, safe sex, drugs, finding your own way in the world, romance and not judging a book by its cover. Granted there is more action, but Kevin and Morgan seemed to me to be just like eighteen and twenty year old boys with some baggage and issues. Dax as your fun, crazy mate.

The Pining of Kevin Harding is a fun YA/NA read with some easy-going paranormal writing… and plenty of action. There is a bit of gore, but not much. It has humour but also touches on topics that are relevant for teens. The MC’s and secondary characters are either likeable or not, depending on who they are. My favourite character hands down had to be Dax, Kevin’s friend, sometimes fuck-buddy, and puppy dog-esque vampire. Once again, I feel that Devon McCormack has written a book that will definitely resonate with young gay males. 4 Stars.

What was I supposed to do? Dax really should have given me a lesson in the basic science of picking up guys. I’d never done this before. I was supposed to pick him up and kill him? That was a lot to handle in one night.

Thanks for the review for The Pining of Kevin Harding! 🙂

Love your review. I’m eager to read the book. 🙂

You’ll enjoy it, Cindi, I dare you not to love Dax. It seems I have some Dax love going on 🙂

I’m going to be all over it tomorrow, hopefully. It’s frustrating having a book you are eager to read and not having time to read it right then. 🙁 I could tell by your review I’ll love Dax.

Okay, I’ll say no more, Joha, lol. Glad to hear you are enjoying it.

I look forward to your review 🙂

[…] was about understanding demons as ethereal parasites, rather than malicious slaves of Satan. The Pining of Kevin Harding is a glimpse into the psyche of a vampire that’s struggling against a mind-altering virus, rather […]