Tigers on the Run (Tigers and Devils #3), Sean Kennedy 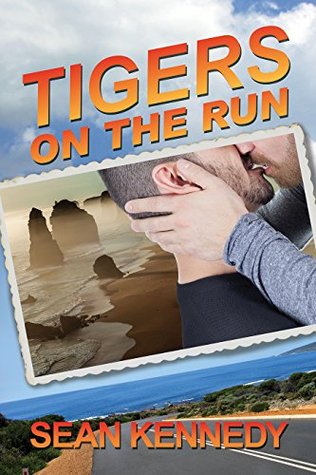 Young Australian Micah Johnson is the first AFL player to be out at the beginning of his career. Retired professional football player Declan Tyler mentors Micah, but he finds it difficult, as Micah is prone to making poor life choices that land him in trouble. Nothing Dec can’t handle. He’s been there, done that, more times than he’d like to admit. Being Simon Murray’s partner all these years has Dec quite experienced in long-suffering and mishaps.

As usual, Simon thinks everything is going along just fine until his assistant, Coby, tells him a secret involving an old nemesis. Simon and Dec’s problems mash together, and to solve them, they must undertake a thousand-kilometer round trip in which issues will have to be sorted out, apologies are finally given, and a runaway kid is retrieved and returned to his worried parents.

I love Simon and Dec! I had to start off by saying that. And it was so good to get another book about them since I thought Tigerland was going to be the last.

Tigers on the Run is the third book in the Tigers and Devils series. It was so nice to catch up with the characters again and I was so happy when I heard this book was coming out. Simon and Dec are one of the couples I will happily follow along for years and years if more books come out in this series.

Things between these two are good. They’re a lot more solid than they were in the first book. They still argue and still disagree, but now they’re more mature about it and they work through things a lot better… most of the time anyway.

For the most part I really loved this book. It felt so good to catch up with the characters and see how they were doing. But there was a part of it that really I could have done without. And that was the whole Jasper Brunswick stuff. That part of the book really didn’t work for me and I would have preferred it not to be in here. There’s so much history there, I just would have preferred if it had been left alone.

Saying that, it didn’t really take from my enjoyment of the book overall. I was still able to enjoy Simon and Dec’s relationship. And the Micah storyline was good. I also loved seeing how Fran and Roger and Lisa and Abe were doing. I love those guys and they add something to every book for me.

This book also touches on the fact gay marriage isn’t legal in Australia yet. It made me kind of sad because I would love a wedding for these two and I would love to actually see them get married. It was brought up a few times, which was nice and also sad, too.

The ending makes me think we’ll be getting more of these two in the future, which is great news. I would love more Simon and Dec and Fran and Roger and Lisa and Abe. And hopefully in the next book, we’ll be able to have a wedding.