The Man in Black: A Ghost Story, Jordan Mason 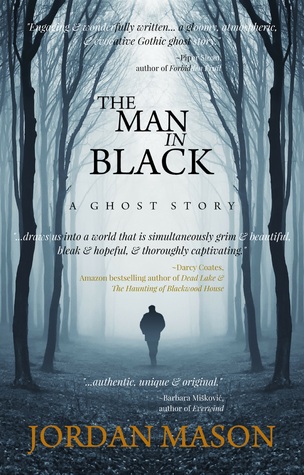 A classic ghost story: a chilling winter’s tale set within the heart of the North.

It happened during the winter of 1973…

Anne Davies lives on the corner of the Rotten Row in the small village of Stoney Grange, having been exiled there following the untimely death of her father and the mysterious disappearance of her mother.

Though the house is cheap, it comes with a price beyond that of money.

Something dwells from within its walls, something unsettled.

The Man in Black: A Ghost Story is a chilling short story written in homage to Gothic ghost stories and tales of old.

Sometimes I get really lucky. Finding this book was one of those times. I was on Amazon looking for… hell, I don’t even know what I was looking for. I just needed something I could read quick. I took a chance when I saw this book and downloaded it. Seeing “ghost” in the title played a big part. I’m all about ghost stories if they’re written well. The Man In Black was definitely written well.

As the blurb states, a young woman is forced to move into the poorer part of town. It’s a huge change for her because she grew up with wealthy parents and never wanted for anything. That is, until her father passed away and her mother abandoned her, leaving her with nothing. The place she moved to is called Rotten Row. It sits close to an abandoned coal mine. Years before, an accident at the mine had killed several workers and injured others. When it shut down afterward the area sort of became a ghost town. Anne’s new home is in an old house that’s seen better days. There’s not much to it, and it would never be called overly nice, but it’s home as she tries to figure out what she’ll be doing with her life. She gets a job working with a butcher, who sometimes gives her scraps at the end of the day. She’s not going hungry and she’s doing okay considering everything that has happened in her life.

She’s not in her new place long before she gets strange feelings. She’s convinced that she’s being watched. When she actually sees the person watching her is when the story takes a big turn. It’s a man in black. Perhaps her fear wouldn’t be so bad if all he did was watch. At one point things get violent and Anne’s world is almost turned upside down again as a result. 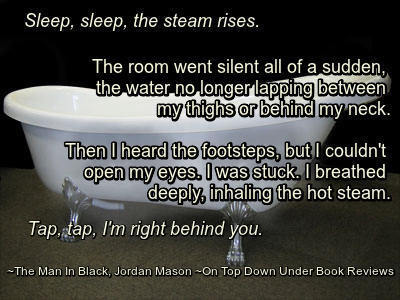 On top of the man in black, there’s also an odd woman who watches her from outside in the snow. Why? The woman does nothing but stand on a corner staring at Anne and her house.

When Anne meets her upstairs neighbors, an older couple, she doesn’t feel quite so alone, even with everything going on in her new home. The man in black still terrifies her but at least now she has human contact outside of where she works. There’s also a cute dog who only makes an appearance on Sundays to eat food set out by the older couple. Where the dog is on other days is unknown, but Sunday is his day to show up, drink a lot of water, and eat the food placed outside for him. A pitiful looking thing, Anne feels sorry for him but he won’t come near her.

More happens with the dog but I won’t spoil it, nor will I say more about Anne, the man in black, or the others.

This is a really good ghost story. While it’s violent in a couple of places, it’s not at all what I was expecting when I started reading it. It’s creepy and you’ll cringe when the violence occurs, but there’s a lot more to it than all that. There are reasons why the man in black is inside the house. There are reasons why he’s angry and bitter and doesn’t want anyone living there. Then we get to the odd woman outside who’s always watching Anne. There’s more to this woman than meets the eye as well.

I’ve read a lot of ghost stories over the years. If I’m actively seeking out horror, I’m usually looking for something that has at least one ghost (good or bad) in it. Sometimes I’m surprised. Most times, I’m not. Most are pretty predictable, to be honest. That wasn’t the case with this story.

I found this book completely by accident. It was an impulse one-click download on Amazon because I needed something different. I definitely got that with The Man In Black. I had a couple of niggles but nothing major. There are some teenagers introduced in the story. I felt that that particular section of the story was somewhat confusing. I also felt that Anne, who initially came across as an intelligent girl, was a little irresponsible a couple of times in regards to her job – the same job that she needed desperately.

Overall, an entertaining horror story. It’s one of those books that will have you rushing through it quick because you’ll be eager to see how things play out. There’s a big twist at the end that I wasn’t expecting. It was very nice surprise.

Highly recommended if you’re a fan of ghost stories or just horror in general.

This is definitely right up your ghostly horror alley. It is so nice to find a good book when cruising Amazon or somewhere else, especially when you aren’t sure what you want.

Really nice review, Cindi, no spoilers and I like the creepy sounding quote/pic 🙂

Thanks, Kazza. You know my love for ghost stories and this one really was right up my alley. It’s so rare to find a book like this out of the blue. I’m so glad I took a chance. I’ll definitely be reading more by this author.

I love ghost stories. Thanks for your review. Off to buy it now.