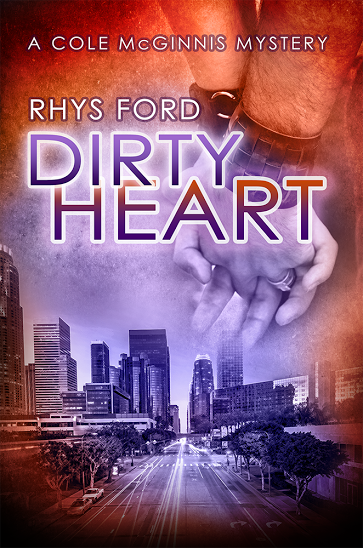 Former LAPD detective Cole McGinnis’s life nearly ended the day his police partner and best friend Ben Pirelli emptied his service weapon into Cole and his then-lover, Rick. Since Ben turned his gun on himself, Cole thought he’d never find out why Ben tried to destroy him.

Years later, Cole has stitched himself back together. Now a private investigator and in love with Jae-Min Kim, a Korean-American photographer he met on a previous case, Cole’s life is back on track—until he discovers Jeff Rollins, a disgraced cop and his first partner, has resurfaced and appears to be working on the wrong side of the law.

As much as Cole’s fought to put the past behind him, he’s soon tangled up in a web of lies, violence, and death. Jeff Rollins is not only trying to kill Cole’s loved ones, he is also scraping open old wounds and long-forgotten memories of the two men Cole loved and lost. Cole is sure Rollins knows why Ben ruined all their lives, but he isn’t looking for answers. Now Cole is caught in a cat-and-mouse game with a cold-blooded killer with the key to not only his past but his future.

If you’re a fan of the Cole McGinnis series, this is the book you’ve been waiting on. You know the story of how Cole and Jae met. You’ve watched them go through hell to finally become the couple they are. You also know that before Jae there was Rick, Cole’s first real love. Rick was taken away from Cole by someone Cole called friend. No, not just friend. He called him brother. They weren’t related by blood, but that didn’t matter. They were as close as two brothers could be. What you didn’t know was why Cole’s best friend destroyed everything. While he may not have killed Cole dead, he might as well have. That is, until Jae came into his life.

I won’t be saying why Ben did what he did. You’ll have to read Dirty Heart to find out. And I will say that I hope every other person who reads this book keeps spoilers out of their reviews as well. This, as I said above, is what all the fans of the series have been waiting on. We wanted to know why. Though we loved Jae and Cole together, we wanted to know what led Cole where he was. Rhys Ford gave us that and she did it in a big way. I was so convinced I knew why Ben did what he did. I thought I had it figured out from the first book. I was right in a way but only partially. I really didn’t see that ending coming. It was perfect.

Jae and Cole are living their lives as a happy couple. Jae has finally put the struggles of his childhood and family behind him. He’s openly living with the man he loves. Cole has finally settled down a little. Oh, he’s still getting shot at on a weekly basis, but he doesn’t have a death wish. He has his man to come home to at the end of each day.

All our favorite characters are back in all their glory. From Bobby and Ichi, to Mike and Maddy, Scarlet, and even my favorite character of all, Claudia, they all play a big part in Jae and Cole’s existence. Once again danger shows up at the door and it’s up to Cole to end it here and now. What he doesn’t expect is for his past – that he’s fought like hell to put behind him – to slap him in the face at the same time. Not just slap him in the face, but everything that happens is intertwined. 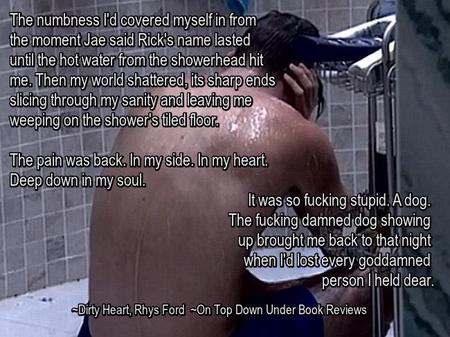 It all starts with a phone call about a dog. From there, a visit from Jae’s aunt, who he and Cole both despise. Suddenly they’re all thrown into the middle of something they might not find their way out of.  When Cole discovers that the one trying to harm him and his family is someone he used to know well, it’s up to him to not only stop the guy, but to find out why. Finding out why will open old wounds he might not be prepared for.

I can’t say more than that. I will say that I was in tears in the first few pages. I said it all starts with a phone call about a dog. Those who read this will know the significance of that dog and why it was such an emotional part of the story. The entire book was an emotional roller coaster. You want to know all the answers but it’s difficult watching Cole as he finds them. Parts are downright heartbreaking. Others are downright beautiful. Jae is Cole’s rock. It doesn’t matter what Cole is going through, Jae is right there to catch him when he falls. I’ve adored Jae from the first time he was introduced way back. Nothing compared to how much I loved him in this book. 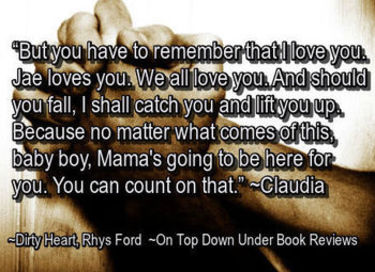 Claudia, Cole’s surrogate mother, is as wonderful as ever. There’s one particular scene in Dirty Heart that made me fall in love with her all over again. She’s the mother everyone wishes they could have. Then there’s Mike. It took him awhile to come out of his shell (so to speak) but when he did, he became the ultimate big brother to Cole and Ichi and husband to Maddy. What do I say about Bobby and Ichi? Bobby is the perfect best friend and Ichi is the coolest little brother to Cole and Mike. He’s also the perfect partner to former bad boy Bobby. You can’t be introduced to any of these characters without loving them. Sure, Mike is a hard ass at times, but isn’t that the way most older siblings are? 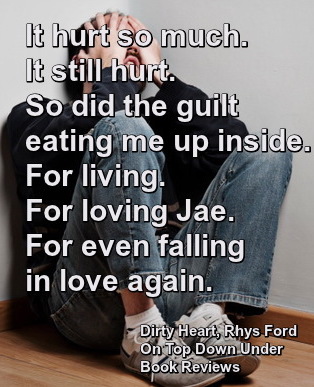 I absolutely loved this book. I’m always nervous about series finales and I admit to being especially so about this one. I read 5 books (plus the short stories in between) leading up to this, wanting to know why Ben did what he did. I knew the reasons were going to be major, but what if the series didn’t quite play out the way I hoped? That’s not a dig at the author and I’m sure she knows this. It’s just that I’ve read so many series over the years that built up to something huge but ended on a dud. When you invest so much time into reading the books, you become invested in the characters and their stories. Rhys Ford definitely did right by these guys. No, not just right. She ended the series brilliantly and I ended it with tears in my eyes. It’s not all bullets and tears. The humor we’ve all grown to love from these folks is there as well. You’ll find yourself snickering one minute and teary the next. I did.

Thank you to the author for the great series and for giving Cole and Jae (and the others) the ending they deserved. It’s always sad to see a beloved series end. I hope these guys are revisited in shorts someday. If so, I’ll be all over them. If you’ve not read this series, I can’t recommend it enough – every book.

YAY!!!! Welcome back, Cindi, and with a fabulous review of a series I know you’ve loved. Oh, boy, do I ever understand how it is to worry about how a book might be, it could be crap, but no need to fear because Rhys Ford obviously loves these characters like you (and others) do.

Thank you so much, Kazza. It’s good to be back and I’m not surprised what brought me back was a story in this series. I have loved these guys from day one. I was so happy to see the way everything played out. There were a lot of tears and quite a few laughs but it ended perfectly. You can tell the author loves these guys. It shows with every word written in the entire series. It’s sad to see it end, but I’m glad I was able to be along for the ride. I could’ve gone with sexier quotes… Read more »

I can’t forgive you for leaving ALL the sexy out.

I know, right? What was I thinking? And Rhys Ford knows she can write damn good sex scenes. 😉

Thanks for the wonderful review, Cindi. I’m reading Dirty Heart right now and I knew I could count on you to leave out any spoilers. 🙂 I’m less than half way through, but I plan on spending the rest of the evening reading until I finish it. I’m really going to miss these guys. Actually, I’ll miss all the wonderful characters in this series, but Rhys say we will probably see them again someday. I will definitely be looking forward to that. 🙂

Thank you for your kind words about my review, Lisa. By now I’m going to guess you finished Dirty Heart or are close to it? I am so eager to hear what you think about it, minus spoilers, of course. 🙂 I was so happy with the way the series ended. I love knowing there will be more stories with Cole and Jae in them, even though their official story has been told. I love having that to look forward to.

You were right, Cindi. Rhys gave the guys the ending they deserved. 🙂 I was very happy with how everything was resolved and a little surprised about Ben’s motives. That’s all I will say about that. 🙂

I knew you’d agree, Lisa, that the ending was perfect for these guys. While I can’t say I was surprised by Ben’s motives (I’d always assumed it was something like that), it didn’t quite go in the direction I expected. And…. I can’t say more than that. 🙂