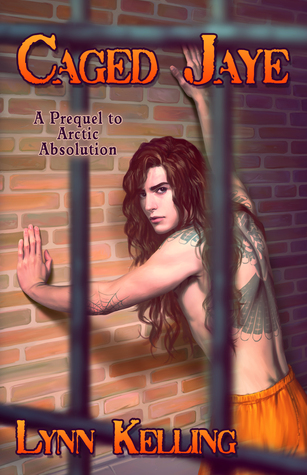 It’s Jaye Larson’s nineteenth birthday, and all he wants is to spend time with his boyfriend and his mother—the people he loves most and who make life worth living. But, faced by his mother’s demons, the imperfections of his relationship with boyfriend, Kris, and dangerous, homophobic strangers, one by one, all of Jaye’s dreams are soon derailed. Plunging into a waking nightmare, shortly after going to bed alone, he wakes in an alley, pinned down by two men with slow, bloody rape and murder in mind. It’s just the start of Jaye’s fight for his life, and his sanity, as time and time again, he’s forced to make impossible choices and survive, no matter what it costs. (M/M)

**THIS REVIEW IS NSFW AND CONTAINS GRAPHIC CONTENT AND POSSIBLE TRIGGERS**

I was looking forward to and dreading Caged Jaye in equal parts. Why? Because I loved Jaye Larson in Arctic Absolution. I loved Arctic Absolution, it was my Book of the Year two years ago and that meant this book could have sucked. More than that, I knew bits and pieces of Jaye’s ordeal, but not all of it. However, what I did know was enough to have me enter the reading process with a sense of trepidation. Caged Jaye is not unlike sitting in a counselling session with someone who has PTSD, has been raped, or has been badly abused. You know snippets, but as the sessions progress, and the other person opens up, it becomes more acute and complex. This book has that intense one-on-one feel as you read.

Jaye’s a sweet teenager. He’s a hard worker and a part time job turns into a store manager’s role at an Anchorage retail store. He likes his work and sees himself going further one day. He loves his mum, Cora. Cora always told him he was her Bluejay, that one day he would fly

away from the existence they had, one of borderline poverty and her need to do whatever it took to pay bills, raise a child on her own, and numb herself. Now she’s an addict and incapable of being the mum he remembers of pre-adolescence. Still, he calls in to see her often – he doesn’t live far away with his boyfriend, Kris. His relationship with Kris is by no means a scintillating love affair. It’s not that he doesn’t care for Kris, he does. Jaye accepts what he has, he’s fairly pragmatic, but he looks for the positive, the nice aspects whenever and wherever he can find them. Jaye and Kris are young. Kris isn’t ‘out’ and he doesn’t know what he wants. This translates into not knowing how to be a real boyfriend to Jaye. This also translates into sucking when Jaye is brutalised and incarcerated and Cora is nowhere to be seen. 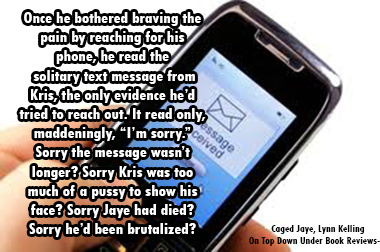 Just after his birthday dinner with Kris, Kris has to leave to go visit his parent’s place, and Jaye heads home alone. Later, he wakes up in an alley behind their apartment with some thugs that were at the restaurant they ate at all over him – he’s naked, cold, being terrorised, tortured and raped. 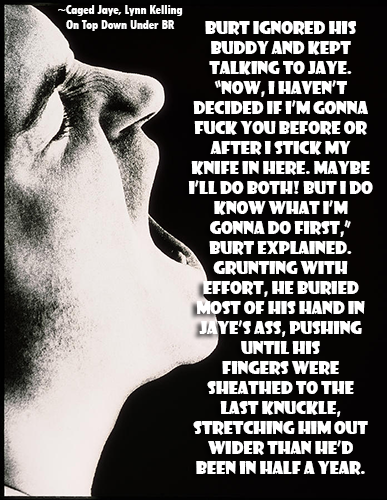 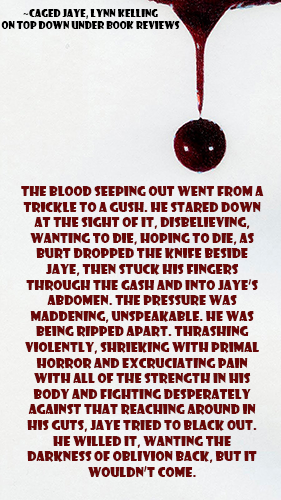 It’s beyond horrendous and the beginning of Jaye’s world being turned upside down – the law truly is an ass and people can let you down when they’re needed the most. 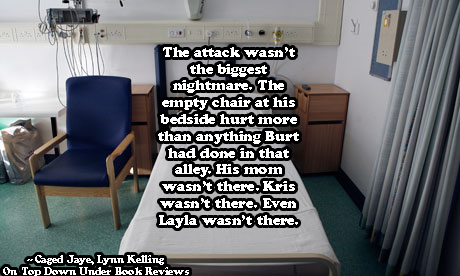 Jaye knows he’ll need protection in jail – he’s pretty, looks younger than he is and has long hair. One of the guys he’s transported to FCI Sheridan with, Ro, tells him where to go to find someone who will ‘protect’ him while he’s in. The mark is Cash, the head of the Disciples, and while Jaye uses a lot of bravura to make sure Cash wants him, it’s nerve-wracking and deeply unpleasant.

So Jaye is now “Johnny” and he’s Cash’s. However, no matter what Cash says, his ‘hole’ isn’t always strictly Cash’s and that’s scarier still. 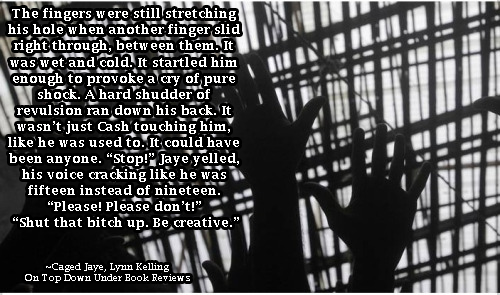 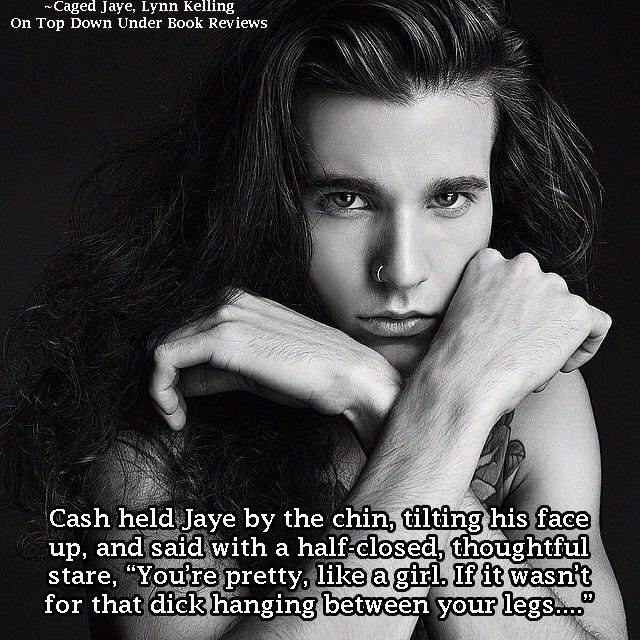 Not only is Jaye dealing with an injustice which landed him in jail, coping with the difficulties of being in there, but he’s dealing with the lack of anyone on the outside for him. It’s hard enough to do the time without someone there to ground you or to look forward to talking to. 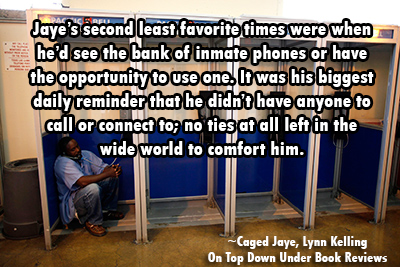 And the ghosts of the past and the present merge, creating an emotional nightmare which is claustrophobic, prone to break a person down, and seemingly insurmountable.

Caged Jaye is a potent read, irrespective of whether you’ve read Arctic Absolution or not, and this book can be read as a true standalone. You get to know Jaye Larson very well here and you experience the nightmare a sweet nineteen year old experiences in close quarters. Every time he is powerless is horrendous. Does he fight back? Yes. Yes, he does. Eventually. He gains strength in ways I wouldn’t wish on anyone, let alone a teenager, but he has to in this scenario. It’s survival and Jaye is definitely a survivor. You can see when he makes that concrete choice to live. I’m mighty glad he did because it created the young man I loved in Arctic Absolution and the one Dixon fell for. For all of my painting a dark picture, there is hope. It ends with a more resolute Jaye. However, Caged Jaye is not a romance, there is a fair amount of sex, so it is erotic if you like this kind of sex, but for me it’s more darker gay fiction. If you like reading prison stories, you don’t mind a walk on the dark side with your emotions reefed out of you, if  you can handle rape and violence and a lack of a romantic plot, then this is a very, very good read. Caged Jaye is absolutely riveting reading. 5 Stars!

What a fantastic review. I love how you told the story with the quotes and GIFs. So heartbreaking, but I can tell it’s a great book.

Lynn Kelling always gives me the words to work with in a review like this. It was a challenging review because I had to find the right pics that were subtle but able to support the content and I didn’t want to give away a lot. It is sad and frantic and anger-inducing and hopeful and bloody fantastic.

That was a great review, Kazza. I was also a huge fan of Arctic Absolution so I’ve really been looking forward to Caged Jaye. I know it’s going to be brutal at times, but well worth it too. Lynn Kelling is a great author and I can’t wait to read more about Jaye.

I agree, Lisa. Lynn Kelling is a wonderful writer. It’s to the fore in Caged Jaye, because while it’s in the vein of Arctic Absolution, she’s amped up the intensity to suit the environment of the prequel. She’s excellent at unapologetically putting the pedal to the metal when it’s required. Oh yes, Arctic Absolution is such a good book, a re-reader and a total keeper 🙂

Thank you for your kind words on the review. I’d love to hear your thoughts on Caged Jaye after you’ve read it 🙂

This book excites me and scares me and I don’t know which part is winning. I have to get the cojones and see if I can read it when it’s out to buy. Those quotes are kinda awesome and kinda scary. 🙂

I totally get what you mean. I was scared – maybe it would be too painful – as I loved Jaye. It is painful… and I loved it, and I think I now love Jaye even more. Lynn Kelling never lets me down.

I hope you read it, Matt. It is so worth the trepidation 🙂