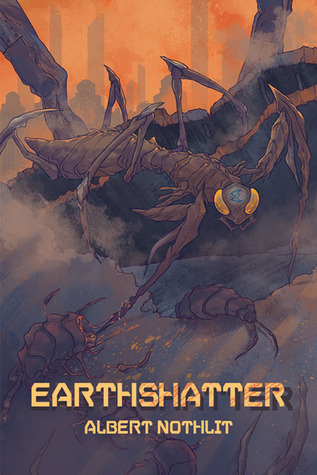 The world is gone. All that’s left are the monsters.

The creatures attacked Haven VII with no warning. An AI named Kyrios, a nearly omnipotent being, should have protected the city during the Night of the Swarm.

No one knows why It failed, or why It saved eight specific people: the Captain, the Seer, the Sentry, the Messenger, the Engineer, the Alchemist, the Medic, and the Stewardess. They have no idea of the meaning behind the titles they’ve been given, why they were selected and brought together, or what Kyrios expects from them. When they awake from stasis, they find their city in ruins and everyone long dead. They’re alone—or so they think. But then the creatures start pouring out from underground, looking for them. They don’t stand a chance in a fight, and with limited supplies, they can’t run forever. All they know is that the creatures aren’t their only enemies, and there’s only one place they can turn. Kyrios beckons them toward Its Portal, but can It be trusted? In Its isolated shrine in the desert, they might find the answers they need—if they can survive long enough to reach it.

This is the first Albert Nothlit book I’ve read and all I can say is that I feel like I’ve discovered a huge secret but one I have to share with everyone I know, and as a very occasional guest writer for On Top Down Under Book Reviews I thought who better to share it with.

Earthshatter literally shattered my mind, it is an amazing read and for its main genre Sci-Fi it is like absolutely nothing I have read for years. I can’t believe a book of 530 pages went by so fast that I was shocked out of my drooling induced trance when it finished, as I just couldn’t stop reading it and was clinging to every word. Not many books drop me into another plane of existence to the point where I don’t even hear the phone ringing. The storyline is captivating and the writing style, while a little unorthodox, works well in conjunction with the alternating POV’s as they begin to switch and by the end of the book they’re in high rotation, yet it does not get sloppy nor leave the reader scratching their head. For me it was an amazing experience and there is no filler in the book either.

I’d like to say upfront that there are no relationships in this book even though I found it under a sub category on Goodreads as Romance> MM. Even though this is 100% wrong as the category I still would have read it anyway. There was no way anyone was going to get into a romantic mood because from page two until page 530 they are running for their lives, constantly. There are however a few hints of two male MC’s who shared a past, but in this book there is simply no time for anyone to get involved. Whether or not it was an intimate relationship I guess the sequel will reveal many more secrets.

The other amazing factor that makes this book so enthralling is that there are eight, yes eight, main characters. I think that this is a major gamble for any author as it is very easy to destroy a novel attempting this whereas this is what makes this book come alive.

Albert Nothlit spins this intricate tale beautifully, by jumping from one character’s POV to another’s, constantly keeping them all involved, it’s more like live commentary so there is no back-tracking over past events or dialogue. It’s more like who’s been tossed the hot potato, and their current thoughts on the shitstorm they’re in come to the fore while still interacting and speaking with the others. It’s a hard concept to pull off and, yes, it has a few flaws in the system but overall it works seamlessly. He’s used it more like having a talking stick but it’s used as a javelin spearing it’s way through everyone’s psyches and although you might not know who’s POV is conveying the storyline, you get to hear their inner thoughts as they’re constantly running. I loved the fact that you got to hear internal snippets of everyone’s thoughts but you are always informed which POV it is after a few lines, if not straight away. There are a couple of spoilers below but nothing too major.

An ancient AI system known as Kyrios, who helped the people of earth get re-established after a great disaster years ago, is finally outcast as the majority of people become suspicious of him, regarding him as Big Brother and get sick of being watched. The new continents become known as Havens and he is placed on Haven VII in the middle of the desert just outside the city. The population there seem to trust him more than the rest of the world. As a faction against him rises up again to have him taken out of the picture forever for no good reason, Kyrios quickly discovers that there is something very strange going on but because he did stop most of his monitoring by the time he begins again, he realises he’s about to witness Earth face another major disaster but has put a fail safe system in place.

Unfortunately, all does not go to plan and Earth hangs in the balance again, except this time it’s much worse. However, he has chosen 8 people that he believes can rectify this latest problem.

Known only to him as the Captain, the Seer, the Sentry, the Messenger, the Engineer, the Alchemist, the Medic, and the Stewardess, everything happens so quickly he has little time to collect them. He is allowed to send his sentry’s into the city of Haven VII and the residents there are always in awe of them, but as the new problem Earth faces happens with such little warning, the 8 are found face to face with the sentry’s holding a black box with a recorded message to go with the sentry’s. All comply except for one who is taken by the government.

The next morning the seven awake in boxes in hidden caves in the middle of the desert and slowly make it back to the city. They’re shocked to find that the desert is still swarming with mutant centipede’s making it hard going, they’ve also been broken into two groups which neither of them know about. Reaching the city is the main objective and group one discovers that they all know the same person. They also discover a card on themselves that looks like tarot cards but have no idea what they are. As they finally reach the city they are utterly shocked to the core with what they find.

The two shocked groups manage to stumble across each other and the story lurches into overdrive as all seven realise they all know the same person, but one moreso than all of the others, his little brother, and his little brother keeps freaking them out saying that his big brother is still alive and they have to find him. A couple of his friends know that his little brother has been locked away in a mental institute for years so they don’t believe him at first. He scares them yet he’s the youngest of them all, but as his creepy little pieces of information keep popping out, a few begin to believe him. So their first mission is to find his lost brother.

I could go on forever about this book and although I let a couple of minor spoilers drop in this review in the grand scheme of things they really don’t give much away. I think Earthshatter should be on all sci-fi, paranormal and dystopian lovers books to be inhaled for 2016, but I think it really surpasses genre’s in general. It’s one incredible ride with a fantastic story, eight amazing and annoying characters bundled into some very creative writing and writing style. It’s a great journey and I hope you enjoy it as much as I did. I did NOT receive a free copy of this novel either, I purchased it.

God, Paul. I am SO glad it was you who reviewed this book. I would be trying for pages and weeks, lol.

Earthshatter sounds amazing and I’m buying my copy based on your passion for the book… and that you know your shiz on sci-fi, dystopian books. Thanks for putting it on my radar 🙂

Thanks Kazza it was my pleasure and was too good to pass up. You got me figured I do love my sci-fi dystopia 😉

I second what Kazza said. This looks like an amazing book and I could see me taking forever trying to summarize if it I were to review it. Your review sucked me in so I’ll definitely be reading this as well.

Thanks Cindi, I know you’d love it too. It’s such a great read

I am deeply humbled and just right out happy to read such an amazing review of my novel. Thank you, Paul! It was beautifully written. I hope you\’ll let me know how you like Haven Prime book 2, Light Shaper, when it comes out on August 16, 2016!

No problem Albert, it was an excellent read. I can’t wait to see what the sequel has inshore for everyone 🙂

Wow! Such a great review I don’t know how you could put this epic book to words like this. Just the name is everything. 🙂