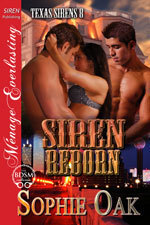 Cole Roberts and Mason Scott loved each other since childhood, but they needed something more to make them whole. A Dom and a switch, they searched for the right female submissive to settle down with, but a terrible accident tore them apart. Their perfect life shattered, they were each left angry and alone.

When a killer puts the trio in their crosshairs, Cole and Mason will have to put aside the demons of their past in order to forge a future with the woman they love.

Kitten (Katherine) Taylor has been a series favourite for me. I was looking forward to seeing how she would go with her own men in her own book. Kitten was young when she was abducted, raped and used as a slave by the psychotic Master Hawk over two years prior to the setting of this book. Her family, who are ultra-conservative, blamed her for the abduction and made her feel worse. Julian Lodge, the owner of the BDSM establishment The Club,  took her in after she was lost, alone, and speaking in third person.  She’s his partner’s (Finn) cousin, so she’s family. Julian was very protective of the three girls who survived Hawk’s captivity but Kitten being young and sweet made him extra protective.

Cole Roberts is a wealthy, mature, attractive (and rigid) businessman. He runs the family business, Roberts Corp. His parents were loving but are now both dead. Before his father passed he floated the business publicly and that’s making things difficult for Cole. Cole has issues because of land he owns in Bliss, Colorado. The 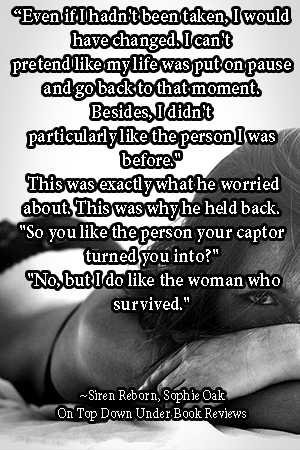 board wants to turn it into a mall – and that won’t do in Bliss. On top of this someone is buying up stock in the company.  Cole has also entered into a D/s contract with Kitten that Julian had drawn up. He knows her past and he wants to take things slowly with her. He’s worried if he moves too fast he’ll traumatise Kitten again, and, well, she’s only just started using personal pronouns again. Kitten likes Cole a whole lot. She wants him to touch her and make her feel special, loved, to feel the bite of the whip, flogger, cane – she’s a bit of a pain slut, and she’s also stronger than Cole and other people give her credit for. Cole can’t seem to understand that touch and care are important to her and that she won’t break with the right man… or men. Yes, she may cry when people are kind, or when something good happens or when she sometimes thinks of Hawk. Yes, she may space out at times. But I like kind people, those who see the beauty in things – which Kitten does. And who isn’t a bit quirky?

Mason Scott is a switch and was with Cole for a lot of years until their sub, Emily, was involved in a fatal car crash when Mason was supposed to be in charge. Cole wouldn’t listen to what Mason had to say. Mason could be carefree and Cole felt this “carefree’ attitude resulted in Emily’s death. He pushed Mason away and things took a nasty turn when Mason was hurting, seemingly blackballed by all the law firms in Dallas and Houston, and he lived in a rundown apartment. For two years he’s vacillated between missing/still loving Cole and feeling angry and betrayed. It seems not only did Cole dispose of him after years of being together – Cole’s parents took Mason in when his family kicked him out after he came out – but it seems he may have used his position to turn people against him.

Mason is in a car accident and his out-of-date emergency contact details still list Cole and Emily. When the hospital calls Cole’s house Kitten pretends to be Emily and goes to see who Mason is. She knows he’s someone who was important to her Master but she wants to see exactly what’s going on and why he isn’t in Cole’s life anymore. Mason can’t believe the beautiful woman who turns up for him, and when he discovers she’s with Cole, he plots. You know the plotting will never go anywhere as he still loves Cole and Kitten is this beautiful ray of sunshine. Still, he can’t admit this for a little while.

I’ll be honest, there’s nothing new under the sun here, but why should there be? The whole fantasy of the book is a good one and I’m buying in. It’s also about the writing, the fun and joie de vivre that permeates the pages of Sophie Oak’s books. It’s sexy, it’s laugh out loud funny, and it’s a total feel-good 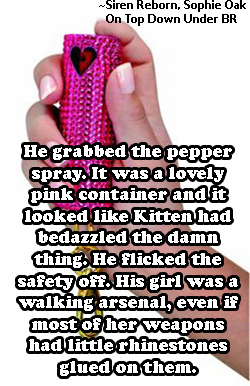 package for me. Hurt/comfort, second chances, a healing; it’s all in here. Siren Unleashed has three really interesting and passionate characters. Kitten is sweet, kooky, and lovable. Mason is hurting but charming. Cole is the big Dom who needs his man and his woman to help him see what’s right. Oh, I wanted to slap Cole a couple of times throughout because his social skills left a lot to be desired. I could have slapped Mason too as he didn’t communicate properly and assumed too much. Of course Kitten is the perfect girl for the two guys, she is the tie that binds. That’s what this series is all about, as well as being a ménage BDSM series with a mystery or some life threatening event. In Siren Reborn not only is Cole’s company having issues, but someone seems to want Mason dead – so there is that as well. The BDSM is on the lighter side and I find the books to be the right balance of mystery, mayhem, mirth, and ménage. There’s always a nicely wrapped up HEA and every book features different MCs with appearances by other much loved characters – in this book “Bliss” also crosses over heavily.

Siren Reborn is a bi ménage romance. I really like poly relationships and I love Texas Sirens and I’m very happy that Sophie Oak has bi characters in the series. I can’t thank her enough for that because she writes mostly het romance. 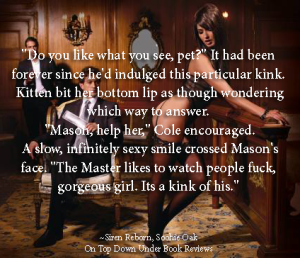 However, her bi men are never forced, rather they’re organic. I read mostly LGBTQ books so I get pissy if authors use it as a ‘eh, let’s dip the toe in’ book. If anyone was going to be free and open with her men being lovers, about second chances, it was going to be Kitten. Her cousin, Finn, is also bi and in a poly relationship with Julian and Danni. So Cole and Mason are perfect for her. This book is so funny, tongue firmly in cheek. Kitten plots, Mason is a charmer, and the other subs are brilliant at teaching manipulation. There’s always a little bit of angst, not much, just enough to make things interesting. Oh, and never is someone getting shot so much fun as in a Sophie Oak book – yes, I am a bit crazy so it suits me. Book #8 and still going strong. 5 Stars!

It says a lot when a series is still going strong (for you, the reader) at #8. Kitten seems like my kind of gal – strong and spunky. I can tell I’d like both Mason and Cole as well.

I love the bling and and the quote “No, but I do like the woman who survived.” I love when an author makes female characters strong. I can tell that’s exactly how Kitten is written.

Sophie Oak’s women are always sassy, strong, and funny. And they’re often packin’ 🙂
I’ve read close to all of Sophie Oak’s books – and that’s a fair few books – and I’ve only read one that didn’t really grab me. I’ve also read her under her other pen name, and as a co-writer with Shayla Black, so there you go 🙂

I loved that quote that you pulled out too.