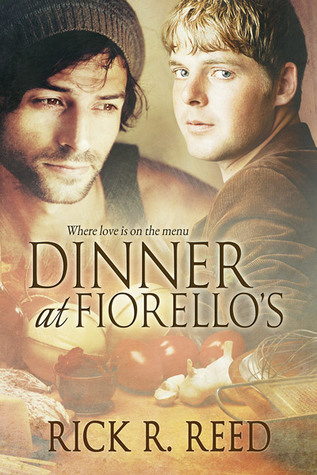 Henry Appleby has an appetite for life. As a recent high school graduate and the son of a wealthy family in one of Chicago’s affluent North Shore suburbs, his life is laid out for him. Unfortunately, though, he’s being forced to follow in the footsteps of his successful attorney father instead of living his dream of being a chef. When an opportunity comes his way to work in a real kitchen the summer after graduation, at a little Italian joint called Fiorello’s, Henry jumps at the chance, putting his future in jeopardy.

Years ago, life was a plentiful buffet for Vito Carelli. But a tragic turn of events now keeps the young chef at Fiorello’s quiet and secretive, preferring to let his amazing Italian peasant cuisine do his talking. When the two cooks meet over an open flame, sparks fly. Both need a taste of something more—something real, something true—to separate the good from the bad and find the love—and the hope—that just might be their salvation. 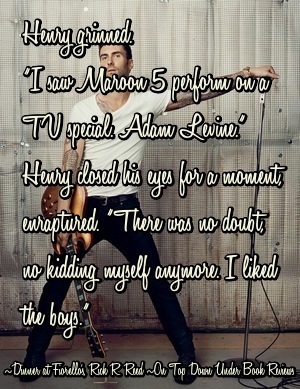 Henry, eighteen, is what some would call a golden child. He’s the only child of an attorney and his wife. He lives in a nice home and his future is set. He’ll be following in his father’s footsteps by becoming an attorney.

He’d always been the golden boy, doing exactly what his family expected.

He’s just graduated from high school and is set to intern for the summer before college in his father’s law firm. He has money, plans, and everything else a boy his age can want – you’d think. First, there was a issue with his best friend, Kade, who got a bit closer to Henry on graduation night than he was prepared for. Strike that. Henry was all fine and good for the so-called best friend until Henry realized that they were only ‘friends’ when Kade wanted use him. It doesn’t take long for Henry to come to his senses in that regard. Then there is the internship that Henry’s father is so convinced is right for his son. Did he ask Henry what he wanted to do over the summer? Or what he wanted to study in the fall? Of course not. Tank Appleby is the king of his domain and his son will do what he says, regardless of what the boy wants. There is Henry’s mother. Cold is a good way to describe Mrs. Appleby. There’s no outward affection for her son, and this broke my heart early on. Later, I felt a bit of sympathy for the woman, but I got over it quick enough. Then there is Maxine, Henry’s surrogate mother, who is the Appleby housekeeper. I adored Maxine at her introduction and continued to until the very end of the book. Everybody needs a Maxine in their life.

Henry doesn’t want to be an attorney like his father. He wants to be a chef someday, even if that means starting at the bottom at a restaurant and working his way up. He sees an advertisement online for a position at Fiorello’s, a local restaurant, and that’s all he can think about. Does he risk the wrath of his parents by applying for the job? But then again, who is to say he’d get it if he applies? There’s no harm in going across town to check, is there? Fiorello’s isn’t exactly in the affluent part of town where Henry lives with his family, so who would know if he checked it out? Finally, he gets the guts and makes his way to Fiorello’s. There, he meets some interesting people, with one being Rosalie. She’s the owner and takes one look at the little rich boy and doesn’t believe he’s serious about working there. If she hires him she doubts he’ll last a day. She offers him the job anyway – with conditions. 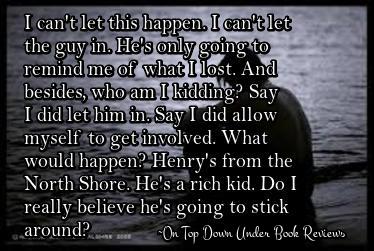 Vito, twenty-six, is a chef at Fiorello’s. He doesn’t come across as the most likable guy. Gruff, he’s the type of man who Henry should run far, far away from. He can’t. He’s attracted the second he lays eyes on the other man and that attraction continues to grow as he (Henry) works to prove himself at the restaurant.

Vito has his own story and it brought me near tears many times as the story went on. While he comes across downright rude on occasion, the reader can tell that this is his way of not allowing anyone or any feelings to intrude on his misery. If he’s rude to the kid, what of it? It keeps him from feeling and feeling is not something he believes he can allow – not anymore. He loved and lost once (in more ways than one) and opening up his heart to Henry will only bring more heartache later. He wants Henry from the moment he lays eyes on him the first time, but he refuses to act on that attraction because in his mind, it’s not the right thing to do. 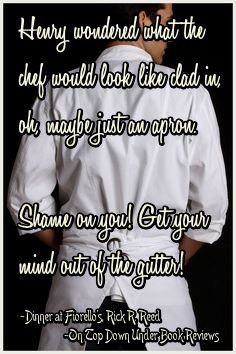 Now we get to Henry’s family drama. His father is angry he ’embarrassed’ him by working in a lowlife (Tank’s words) position when he could be working under him at his law firm. His mother? Well, let’s just say that she has her own issues. I mention above how I almost felt a bit of sympathy for her at one point, but it took only a few pages for any kind feelings I had for her to go out the window. Neither parent would win a parent of the year award, but Henry’s mother does something that I felt was inexcusable. To take the attention off her own drama (you’d have to read the book to see what I mean), she threw Henry under the bus, so to speak. That, to me, is unforgivable.

“I didn’t mean to tell him. It just came out when we were arguing. I’m so sorry.”

There are several things I really loved about this book. First, we have Henry, an eighteen-year-old man who is just trying to find his way. The author wrote him as an eighteen-year-old. Sure, he’s forced to grow up pretty fast and he’s a bit wiser beyond his years in some ways, but the reader is able to see that he still has quite a ways to go before he could be considered a ‘real’ grownup. Don’t take that to mean he’s overly immature and not ready for a relationship with Vito. That’s not the case at all. Second, this isn’t one of those stories where the main characters instantly fall in love or even fall into bed. Henry and Vito both have their own problems they have to deal with before a relationship of any kind can begin. Had it been written any other way, it likely wouldn’t have worked for me.

The family drama is written perfectly, even if I wasn’t pleased with what Henry was forced to deal with. Vito’s grief over those he loved and lost was written extremely well. Sure, he was a hard ass at times (and downright rude to poor Henry) when I felt he should lighten up a little, but it was easy to see why he was that way.

I chuckled a few times.

Come on, parents don’t even have sex, do they? I mean, like a couple of times, with their spouse on birthdays and stuff and to have kids, but otherwise? Nah….

(I’ve been doing this parent thing wrong for all these years. Who knew? *snort*)

I got teary several times.

I got angry more times than I could count.

“So take a few minutes, get yourself dressed, and—” Vito smiled but knew there was only cruelty in it, like baring his teeth. “—and get out dude. I’ve done enough.”

Don’t kid yourself, kid. This isn’t about you. Henry turned away from Vito and stared at the wall. Amazing how fast a moment can turn to shit.

In the end, everything came together nicely and exactly the way it should have. I loved watching these guys battle with themselves as they stubbornly made their way to each other.

What a good review. I think I’d like this book and it’s going on the TBR, along with a few other RRR books you’ve read/reviewed that also sound like “me.”

Glad you liked it, Cindi. I know how much you enjoy the author’s writing.

Love the pics/quotes… and that GIF 🙂

Thanks, Kazza. I believe you’d really enjoy this one, as well as any of the others I’ve read by Rick R. Reed. A majority of them are definitely “Kazza K” books.

I really did enjoy it. While there may have been a bit of ‘insta’ stuff going on early, the story was allowed to play out without everything being rush, rush. I really liked that.

(Anytime I can use Adam Levine in a review, I’m a very happy reviewer… 😉 )

Great review, Cindi! I’m so glad you liked this! I know you love the authors books. 😀

Thanks, Trisha. I don’t think it’s a secret that I’m a big fan of Rick R. Reed. 🙂 I really enjoyed Dinner at Fiorello’s.

Hey Cindi…thanks so much for the wonderful review. So glad you liked the book–it’s one of my most heartfelt and Vito, I think, is one of my favorite creations. And Henry’s mother is modeled after an old boss I used to have…LOL. Also thanks for the rather stirring imagery….

You’re very welcome, Rick. I wasn’t sure about Vito early on, but it didn’t take long to see why he was the way he was and I understood it. He was just guarding his heart. I get that.

Henry’s mother was a piece of work. If she was modeled after a former boss, I can only imagine how it was working with that woman.

You’re welcome as well for the ‘stirring imagery’…. 😉