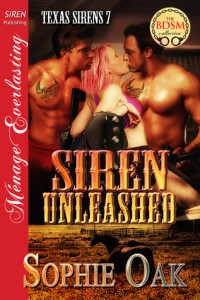 Twin detectives Ben and Chase Dawson have been sent to investigate an unusual murder at a resort owned by Julian Lodge. Julian wants them to protect the prime suspect, a young submissive who was the last person to see the victim alive. The job seems simple until Ben and Chase discover that the beautiful submissive they both desire has a dark past.

Natalie Buchanan came to the Willow Fork Tranquility Spa seeking sanctuary after escaping the clutches of a twisted sadist. Working as a massage therapist at the resort has given her a chance to heal as well as access to the spa’s secret dungeon. But when one of her regular clients ends up dead on her table, Natalie fears that the monster she once escaped has come back to claim her.

Natalie is in emotional pain, she’s been self abusing after her kidnap and abuse at the hands of fetishist psycho Master Hawk, whom she killed. To relieve the pain of the captivity and trauma, Natalie has been cutting, however she’s feeling a lot stronger now – though this new death is testing her limits. She’s also still fearful of affection, in general, and dominant men, in particular.

Yep, that was her. Natalie Buchanan. Rejector of affection. Able to blow a Dom’s ego with a single look.

Fuck, she was lonely. And she didn’t even know how to take a single comforting touch.

Enter twins Chase and Ben Dawson, who I’ve been crushing on for a couple of books. They are ex Seals and now private investigators. You just know they’re going to help Natalie find herself and restore her faith in the ‘lifestyle.’ Plus, they’re going to catch a killer along the way, all while being very sexy, adorable, and crazy-ish in their own right.

How I loved quirky ex Navy Seal but now non-flying, paranoid, conspiracy theorist, Chase Dawson. Chase is in Dallas when Julian Lodge approaches him to investigate Natalie’s… situation. Julian has a personal interest in Natalie as she was found with Julian’s assistance after being locked up by Master Hawk with Kitten (Finn’s cousin) and the longest captive, Gretchen. Julian Lodge is a wealthy 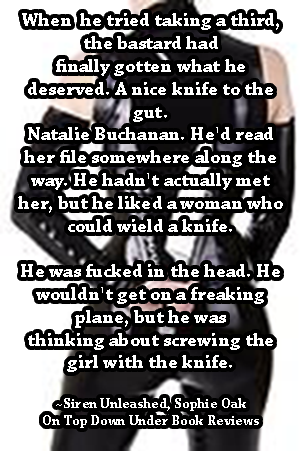 And Chase’s thoughts on Logan… and marriage are (were) so Chase and, of course, are going to be challenged by the end of the book.

Three  months into his training with Leo, Logan was more confident. And he hit people less. Chase wasn’t sure that was a good thing. He liked a little tussle every now and then, and all his friends were getting married. It had turned them into whiny, pussy-whipped emo kings who no longer liked a good punch in the face.

Ben Dawson, Chase’s twin, is currently in Bliss, Colorado checking out a potential Dom for Kitten. Julian wants all the I’s dotted and the T’s crossed before anyone can have a contract with Kitten. Meanwhile, Kitten is being trained as a sub by Logan, the series are rather interlinked. Ben has also been thinking about his friends settling down. Because he’s in Bliss, all the threesome’s get him thinking even harder about a relationship. But… there’s  Chase –

Ben was never going to get married because his other half was a brooding, paranoid, borderline-psychotic, weirdo who wouldn’t even get on a plane.

Ben is the easy going twin, the one that everyone finds easier to connect with 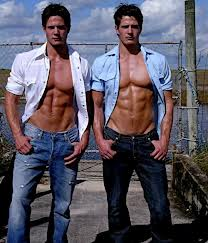 at a social level. Chase is the…interesting one, the one that doesn’t have a filter between weird thought processes and speaking out loud. But Chase feels like he holds Ben back, that everyone likes Ben and Chase is insecure. Externally you wouldn’t know it as he’s brash and forceful. I loved getting to read his inner thoughts and his other side. I really liked Ben, but I loved Chase. I felt Chase’s character overpowered Ben’s. Ben was nice, and integral to the menage, but Chase just burst forth off the page. Ben and Chase also have one of those ‘mystical’ twin bonds where they can feel one anothers pleasure, pain, happiness, or general intense moments. Ben is always feeling Chase’s anger and….weirdness.

Everyone is out in Siren Unleashed – Julian Lodge, Danni, Finn, Logan, Kitten, who is now learning to use personal pronouns. We also meet Georgia, Chase and Ben’s bratty sister, who you just know is heading to Bliss. Even Teeny and Marie get a nod.  And Jack, Sam, Abby and their precocious children, Olivia and Josh, are also here – it is Willow Fork after all. I’m already loving four year old Josh, he’s a chip off Jack’s block. I loved seeing Jack Barnes, and the Barnes-Fleetwood clan – Jack Barnes is forever one of my favourite fictional men.

This is Texas Sirens. So it’s fun, it’s BDSM kink, two guys for every girl – sometimes it’s a bi ménage.  The series is always a great deal of pleasure for me to kick back and read. But I want to say thank you to Sophie Oak for the way she handled self harm caused by abuse. That’s never funny, and it could have seriously gone pear shaped but it didn’t thanks to good writing. I loved the balance of difficult subject meeting off-beat, crazy-helpful characters who are all just what each other need. The sex was toned down here, just a bit, but still hot, and the murder/mystery component was ramped up, along with the guys giving Natalie some love and assistance as she helped bind them together.  And there’s the trademark Sophie Oak humour.

Thanks, Cindi. Yes, I’ve read a whole lot of Sophie Oak, more than most other authors, and I enjoy her style. Fun, flirty, and you can’t knock two guys for every girl 🙂

Great review, Kazza! So glad you loved it! 😀

Cheers, Trisha. Sophie Oak is always a fun reading experience for me 🙂