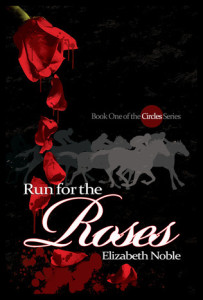 Wanting to end his pattern of choosing controlling and abusive men, Vladimir ‘Val’ Mihalic figures it’s better to live alone than live in fear. Just when things are settling down—his biggest trouble recently is a Kentucky Derby hopeful that won’t load into a starting gate—his best friend Janelle’s violent ex-boyfriend kidnaps her. After she’s seriously injured in a car wreck, Wyatt Harig, Janelle’s estranged father, comes around to tend to his daughter. Despite Val’s determination to avoid relationships, Wyatt interests him in ways that make his resolve waver. As complications and repercussions pile on in the aftermath of Janelle’s kidnapping—including a gambling charge and a murder—Wyatt and Val must work together to seek answers. And the closer they get to each other, the more Val wants them to stay that way.

I’ll be honest, I like horse racing – I’ve bred and raced a number of horses over the years so it’s an interest of mine and I know a thing or two about racing and breeding. I also live in Australia, the nation that stops for a horse race, so there is that. I may be a bit more biased towards Run for the Roses because of that, so bear that in mind with my review. Is it heavy on horse detail? Not really – it does give you a bit about the Triple Crown and when a horse is a barrier rogue. It is centred around a gambling scam. It is called Run for the Roses, so you have to expect horse details. Having nothing about horses or racing would have been annoying. But there is also a mystery, there is a good friendship, and there is the romance as well, and I think it’s a pretty decent balance.

Val and Janelle are best friends. Janelle’s a jockey – I liked that the jockey was female, it’s not always an industry that is particularly female-friendly. Janelle is also the regular rider of a horse that is viewed as a real Triple Crown contender – Izzo (his stable name), or Dreampsinner (his racing name.) She’s recently broken up with her none-too-nice boyfriend, Charlie, and Val is doing what good friends do, making sure she gets out occasionally. One night after they’ve been for a meal, Charlie appears, carjacks Janelle’s car with her in it, and ends up crashing. Val pursues them, as do the police, and it starts off a chain of events. Charlie manages to flee the scene, Janelle ends up in hospital with a broken leg and other injuries, and Janelle’s estranged father is contacted because he’s her next of kin.

When Val meets Wyatt, Janelle’s father, he gets the feeling that he’s been sized up by him. He can’t say for sure, but he could swear that the man is (also) gay.

Val was a decent judge of people, but meeting Wyatt Harig baffled him, and unless he was completely off, Wyatt had given Val a brief visual going over.

After a couple of meetings, Val gets a good overall feeling about Wyatt. As he gets to know the man he becomes the peacemaker between his best friend and her father. Val can’t help but also feel a pull to the sexy, calm, older man. After some less than stellar exes, Wyatt is gentle and stable. Wyatt had a partner but he died a number of years back and he’s been on his own since.

Val had no delusions, however. Wyatt was Janelle’s father, had been all over the world, and was still possibly grieving his partner’s loss. It wasn’t likely he’d have more than a passing interest in Val, if any. 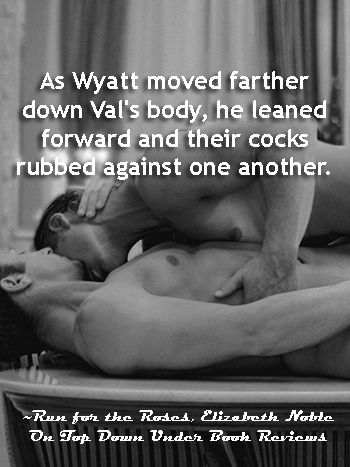 website running, as well as any horse related admin online. He also pays  cheaper rent for his house on the property. It’s peaceful and allows him to keep Sig, his cross draft horse, and his three dogs with him.

Wyatt is an antiquities investigator for Homeland Security. He’s used to theft and the resulting intricacies of an investigation. Wyatt’s  a good man to have around when it appears that his daughter and Val are caught in the middle of something big and illegal in the horse racing world. The police are also investigating and asking Janelle about Charlie, who has turned up as dead as a dodo, as well as two other people who have recently been murdered. I won’t go into any more detail about the  murder/mystery part as I think this is better read than reviewed.

The reason I rated this book 3.75 stars, as opposed to 4 stars, is because there’s a bit of an info dump near the end that I feel could have been avoided with a higher word count. I really like Val and Wyatt and I would have loved some more time with them. I enjoyed  meeting Val’s brother, Vin, but he was not in it long enough. I’m hoping more on Val and Wyatt will be built on in the next book in the series.

I was on a mission to find a book that was light, easy, and uncomplicated reading when I bought Run for the Roses. I had read one other book by the author and it was a good read so I dove on in. This book met all my criteria nicely and I really enjoyed the journey with Val, Wyatt and Janelle the jockey. There are some horses and racing details, a mystery, best friends, and, thankfully, Janelle is not a heinous shrew like some that appear in gay romance. She’s grounded and sensible. There’s also some good man-lovin’ with an age difference (always a favourite of mine), and a couple of decent characters to cheer for. All-in-all this was a nice way to spend a few angst-free hours curled up with a book and a cuppa. I’ll be reading the two other books in the series over the next month because I’d like to spend more time in this universe. 3.75 Stars!

Sometimes you just need something light and uncomplicated. I get that way often. I’m all about books with age differences (as you know) so I can tell I’d like these guys.

I love your review and the quote and pic. 🙂

Sometimes you do need light and uncomplicated and this book totally delivered. Now I’m reading the polar opposite, dark and complicated. Ah, reading. It’s a new adventure every day or two 🙂

Great review, Kazza! I’m really glad you liked this, even if there was a bit of an info dump near the end. 🙂

Thanks, Trisha. It’s a nice read …with horses, I love them. Pretty timely given American Pharaoh just won the Triple Crown, it’s take 37 years for another horse to do that 🙂

I just found this review. Thank you so much for your kind words!