Save a Horse, G.A. Hauser 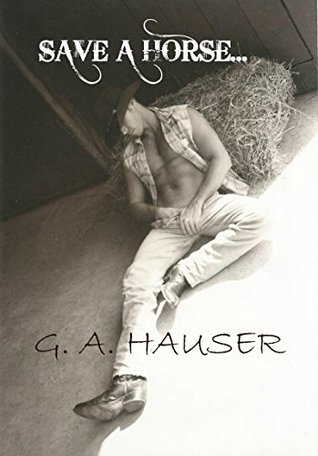 When Sheriff Sky Hayden gets word of human remains behind the Indigo Diamond Ranch, he not only has to deal with the possibility of a murderer in their small town, but is haunted by a handsome cowboy. One he can’t seem to get out of his mind.
Cole Diamond, his father, and his two brothers work a horse ranch in a dying town in Montana. The downturn in the economy, the businesses leaving, has decimated the remaining town’s folk and the last thing they need for their livelihood is the publicity of a murder.
With everyone under suspicion, Sky has to bear the brunt of the investigation as the State patrol begins to dig deep into the lives of the people who have lived quietly off the radar.
And Sky and Cole are forced to face each other, something they had managed to avoid doing for years.
As the pressure builds and accusations are made, Sky and Cole end up together once more, forming a united front against outsiders trying to destroy their small hometown.
But soon the men realize the suspicion falls on them, but not for homicide…for something that is perceived as a worse crime.
Save a Horse, Ride a Cowboy was just a silly expression to sell on souvenir T-shirts. Until the sheriff figures out ‘riding a cowboy’ may be just what he needs to keep sane.
Someone is going to get strung up in that town for crimes they didn’t commit. The two men hope like hell, it’s not going to be them.

Cole Diamond and Sky Hayden have known each other since school. When younger they used to hang out and study together, when they were sixteen and seventeen study meant they’d jerk off together. Nine years have passed since then. Sky is a Sheriff in their small Montana town and Cole works on his family’s struggling ranch. They haven’t hung around one another for nine long years because the attraction was too much and in a town of under two thousand people, gossip spreads like wild fire. A Sherriff can’t afford to be gay and Sky’s family aren’t keen on a queer son or brother. So both men keep their distance. They keep it until the remains of a human body is found around Diamond land. Once the local coroner/mortician confirms it’s foul play they can’t keep the lid on it. Sky has to officially visit the Diamond men and let them know what’s going on.

In a town where nobody wants any negative attention drawn to it, where they 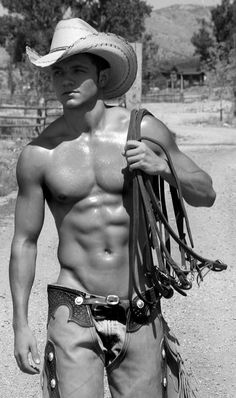 need tourists to come through, the murder isn’t well received. The townsfolk don’t much like cops and they do not want the State Police brought in, but the local Sherriff’s Department has no choice. Sherriff Hayden has to work with Cole and his family as best he can because Horace Diamond is hostile about losing money at his horse riding ranch. Things are tough for them financially and emotionally already – it’s Cole and his two brothers, Leo and Rocky, their dad, and Ria, Leo’s wife. Rocky is intellectually challenged and their mother died quite a few years ago. Cole has never been able to find out anything more about his mum’s death, other than it was ‘women’s business.’ So, it’s a tense household because of Cole’s hidden sexuality and his family’s feelings. Leo watches him like a hawk and asks why there is no woman in Cole’s life. Ria tries to set him up with her cousin, Mary.

Sky Hayden lives in town at his grandparent’s house. His parents died when he was younger and his grandparents raised him. His granddad has passed and his grandmother is in a care facility now. Sky is deeply attracted to Cole but he can’t allow it to be known, so he keeps away, but seeing him again chips away at control bit by bit. Having the State Police involved complicates things even further. While they interview the whole town, the Diamond men are in their sites with an emphasis on Cole, his sexuality being a motive behind murder.

This is by no means a perfect piece of writing. I don’t think I’ve read 193 pages with so many question marks before. So? is used a lot as is huh? Contractions should have been used more in the dialogue, but I enjoyed it a whole lot no matter 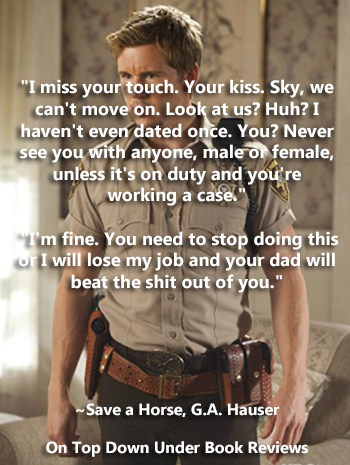 these few niggles.  I’m fairly easy to find the happy key for in my reading – characterisations first and foremost, and I do like my hot buttons being slapped. I had a big old soft spot for Sky and Cole. I liked how Cole made it clear now the door was open and Sky was back in his life, albeit for a murder investigation, he was going for broke and letting him know how badly he wanted him. Sky wanted Cole too, but he had a lot to lose with neighbours and townsfolk not wanting a bar of him as a sheriff if they found out. Once the control dropped, Sky was helpless to resist. I also thought that for about three-quarters of this book the difficulties of being same-sex attracted in a small town, the MCs frustrations, were well laid out.

Cole sneered at his thoughts. How he hated being forced to live a life of celibacy because the person he desired was …a man. And not only a man, a law enforcement officer. If Cole thought his reputation would be in the gutter, he knew Sky’s would be worse.

It would be freaking hard and sometimes it’s portrayed as so easy in romance books. Did I feel that there was too easy an acceptance at the end? Yes, I did. But for a nice ending it was necessary. In the wash up I thought they were good together and the chemistry/sex was really good so I simply went with the flow and felt happy. 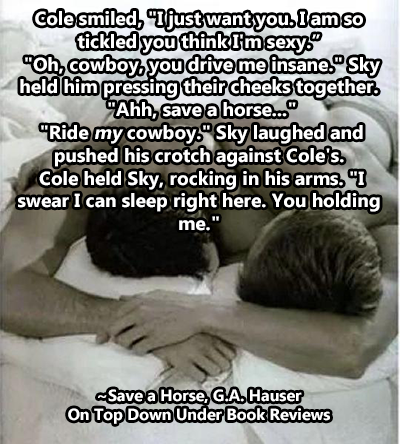 Okay, the hot buttons that got hit in Save a Horse – a virgin, here we have two, characters who wait a while for someone they want but can’t have, pent up desires, teasing, stealing (very) secret moments when they can be stolen. Plus there’s a mystery, although I worked out who the culprit was immediately. Still, it was interesting reading. All of the aforementioned buttons were pressed with Save a Horse… and that cover? It’s gorgeous. The title cute.

At the end of the day, even though I had a couple of niggles, Save a Horse was a very enjoyable read. It caught me at the right time, in the right mood and I like the way G.A. Hauser writes moment-stealing, desperate sex. I loved it in Born to Be Wilde and I really liked it here. If you’re in the mood for a cowboy with a law enforcement officer, some easy, quick, sexy reading, small town love with two guys who just want to be together, this works. If you like the sound of the hot buttons I mentioned, then I recommend Save a Horse to you. 4 Stars!

Previous post
Blackmail, My Love: A Murder Mystery, Katie Gilmartin
Next post
Worth Waiting For (Dare to Dream #3), Bea LaRocca

I do love a good cowboy book, and those quotes? Aww. 🙂

Even with the niggles you had, I could tell I would be all over this book. I think I’d adore Sky and Cole.

Great review. It definitely makes me want to read this.

I really enjoyed it, Cindi. Nice and sexy and I really was cheering for Cole and Sky. You would like this.

I do love that cover as well.

The cover is gorgeous.

That cowboy and me can ride all day. Yee ha! Another book for the pile. 😉

Another to add to my TBR list. Looking forward to reading this.

Nothing like a bit of cowboy lovin’. I hope you enjoy it, flutterfli 😀

Oh mama! I do love that cover. (Say it in a southern accent and it sounds so good) lol. I just love the name and I’ve often thought of writing my own story with said title. I loved your review Kazza, but wasn’t that cowboy photo delicious? Cute too, that you had a Jason Stackhouse sheriff. That just makes me laugh.
I’m looking for this book, I just have to read it for the title alone.
Cheers chickees

I think you’ll like this one, Judy. I really do. The title is fun and the book really enjoyable. Oh yes, the cowboy IS delicious, I had a few to choose from 🙂 and Sheriff **snort* Stackhouse had to be used – we all know what’s under that uniform, don’t we? 😀

Ha! Hell yes we do do know what he’s got going on. I just finished it and loved the ending . I had a bit of trouble with them pretending when it was so clearly laid out for all to see their connection was more than old friends. But I guess in a small town, that’s the way it is.
I picked the culprit too Kazza, but enjoyed the process nonetheless.
A really good read and a very inspiring, ahem, image hunt was had. Nough said!