Born to be Wilde, G A Hauser 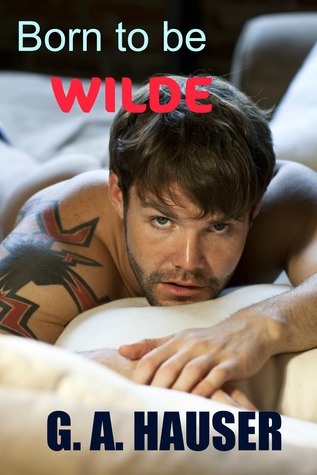 Oooh, G A Hauser pushed all my hot buttons with this book….and I LOVED  it!

Born to be Wilde is about Jesse James Wilde, or JJ, a level two offender/inmate at the Salinas Valley State Prison in California. He received twelve years for narcotics distribution but had his sentence commuted to six years for good behaviour. However, he constantly lives with the threat of his full term being reinstated. When we meet JJ his prison term is in its last months.

The book is also about Michael McClintock, ironically, a probationary corrections officer on his first job and his impact on JJ and the SVSP in general. He doesn’t know whether he’s cut out for the job, because he commits the cardinal sin of letting his desires be known for an inmate, because he’s gay. He cops heaps of guff from prisoners and peers alike, including “Willy Weiner,” a fellow officer who is a sleazy, hypocritical, trouble-making voyeur. All the secondary characters were interesting, including McClintock’s partner, Lloyd Bell, and JJ’s jail buddies, Eric, Arial and his cellmate, Corey. I kept laughing at Eric’s eating habits and the constant mealtime exchange between Eric and JJ –

“You going to eat those potatoes, JJ?” “No. Here, Eric.” JJ scraped them onto Eric’s tray.

Eric shrugged. “You going to eat the rest of your eggs?” “No. Here.”

“You going to eat that burger?” Eric pointed to JJ’s plate.

I will admit this book was slow to begin with. It simply detailed the day in a life of being in prison, and the day in the life of a prison guard. Around 15% through I thought, ‘no way am I going to go the distance on this, this is like reading Big Brother.’ I hate Big Brother. I’m glad I hung in there as it picks up after this. Life in prison is a cycle of sameness with the days seemingly repeated over and over again and G A Hauser sets the tone well. The prisoners and guards all gossip and create dramas – the inmates to break their monotony

Jesse gave him (Michael) a sweet smile and they met gazes. Catcalls immediately rang out –

“Kiss him McClintock! Ya know ya wanna!” “You two lovebirds wanna be alone?” “Let Weiner know when you fuck! He’ll want in!”

“Hey lovebirds!” ‘Going for some good fag fucking?” “Who takes it up the ass for who?”

You get two POV’s in this book. You see JJ’s life in prison juxtaposed against Michael’s life as a newbie officer as well as his time spent outside the prison walls. You get a strong sense of what’s going on inside both MC’s heads. How they’re both coping in their respective situations, how they’re feeling about prison life, about work, about each other, their passion. Their personal feelings towards one another are out there for the reader to see every step of the way. JJ is out as gay, Michael is not, however gossip and his behaviour in the prison drags him out of the closet.

There’s no great social commentary in this book, there’s no real angst, apart from tension caused by a territorial pissing match over JJ between McClintock and Carlos Rios, a gang leader. It had me wondering whether jail rape was going to be on the cards. It also looked at heightened emotions and paranoia developing towards the end of a sentence. How easily an inmate could get an extension on their sentence for someone dragging them into their shit because they can. The sexual encounters between JJ and Michael were off the charts. There is full blown insta-lust in this book. Michael lusts hard-core over JJ from the very moment he sees him. Maybe some other writer might have infuriated me with it, but I just went with GA Hauser and enjoyed the hell out of where she took me. Hooley Dooley, I wanted JJ just because Michael wanted him so bad.

I think this will be a love or hate book for readers. I don’t think there will be grey areas. Somewhat because of how people view this prison setting, or because of preconceived ideas of prison in general. Mostly, I feel it will be how readers view Michael McClintock – is he abusing his power with JJ? Is he TSTL in the way he ogles JJ making his feelings so obvious? Can someone get into that many professional scrapes in such a short timeframe?  I personally loved Michael because he was so darn ballsy. He was a HUGE alpha presence, and the way he looked out for JJ blew me away – did I think a newbie could do all he did? No, but I didn’t give a damn, I loved his passion and I enjoyed the ride immensely, though.

The book covers JJ’s time in jail (most of the book) though to post jail and has a HEA for those who love their HEA’s. I had a few niggles, but not enough to overtake the love I had for the book. I really loved Michael and got caught up in JJ’s world. I thought JJ was a decent guy who had made a mistake at twenty years of age which he paid for. I loved them together and although they didn’t really have enough to build a relationship on (one of my little niggles), I didn’t particularly care because they just worked for me. I loved them post jail as much as in jail, although in jail the sex was rougher and so forbidden fruit-ish, mmm, mmm.

Like it or not, Willie’s comments about Jesse’s fabulous physique ran through his head. Love his sleek long legs, that tat…his fabulous designer stubble and well, that perfect seven inch cock…how could you miss it?

I really, really enjoyed this book. I definitely recommend it to gay romance  lovers. I’ve never read anything by G A Hauser before, but this just grabbed me. I have to fess up about my love of a captive fuck, an interesting alpha male, an alpha and submissive in a captive fuck situation, AND I watch America’s/Russia’s/any where’s Toughest Prisons, so I may be biased as I’m catered to on all fronts by this book. Oh yes, I loved the cover, bang on for Jesse James Wilde.