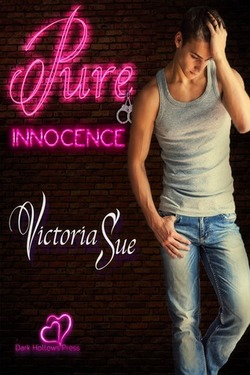 They’d finally caught the madman who had been kidnapping, torturing and murdering submissives. Damon had sat in that warehouse, clutching Oliver, the boy barely alive, and somehow in the weeks that followed Damon never seemed to be able to let him go.

Oliver was broken, in body, mind, and spirit. And for the first time since he had brought him home from the hospital, Damon started questioning himself. Was he going to be enough for Oliver? If he could even find all the pieces of Oliver’s broken soul, could he mend them? Had the horrors that had ripped through Oliver left too many holes for Damon to repair? And finally, if he was going to be able to put Oliver back together, could he stop his own heart shattering in the process?

I’m going to start my review with this – While each book in the series can be read as a standalone, I highly suggest you start at the beginning, Pure (Pure #1). This way you’ll get a good feel for all the characters and you’ll know how Oliver and Damon came to be in Pure Innocence. Also, if you haven’t read that book, this review will be spoilerish.

The readers were introduced to Oliver in Pure Indulgence (Pure #2). While he wasn’t in that story much, he was an important enough character to leave a huge impression; on me anyway. He had been kidnapped and brutalized in ways that would really get to you. Damon, with a bit of help, rescued him. Pure Innocence is his and Damon’s story and it begins with Oliver in the hospital almost immediately after the rescue.

Damon has barely left the hospital since the young man was brought in with horrific injuries. On one hand, he feels a sense of responsibility because he was the investigator who had been hired to find the person who had been kidnapping and killing young men. He feels guilty because he believes that had he done more, there wouldn’t be so many victims and Oliver wouldn’t be in the state he’s in. On the other hand, Damon feels… something… for Oliver that goes beyond responsibility and guilt. 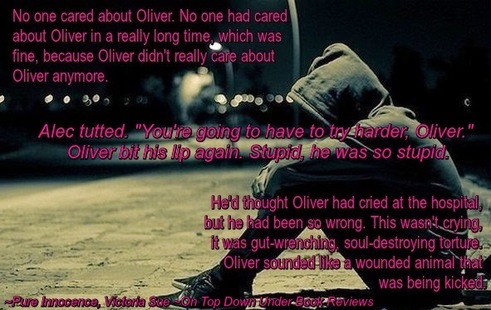 Then there’s Oliver. I’m not sure how to describe him where you would get a good feel for him. He’s so broken. Little by little his back story comes out and you can’t help but feel a great amount of sympathy. He’s heartbreaking. When he wakes up in the hospital, Damon is there and he’s the only one who can calm him even a little bit. But he’s constantly wondering when the ax will fall (so to speak) and he doesn’t understand why this wonderful man would be willing to be there for him and to do so much. Throughout the story there’s a lot of “I’m not good enough” from Oliver, but then again, Damon has his own feelings of not being enough.

When Oliver leaves the hospital he goes to Damon’s apartment. The hows and whys are explained in the story, so I won’t do that here. Damon, who is a Dom at the club Pure, is all about trust and he wants Oliver to trust him completely to take care of his needs. This is difficult for the other man because every time he’s ever trusted anyone in his life they’ve let him down. No, not just let him down. They destroyed him little by little over the years; from those who should’ve taken care of and protected him as a child to others who only wanted what they could get from him. Even with his hesitancy to trust Damon, Oliver still feels safe with him for some reason. It’s that feeling that has him constantly second-guessing everything in what is quickly becoming a relationship of sorts.

I adored Oliver. My heart broke for him at the end of the last book and it really broke in this one. I will say that the “I’m not good enough” thing got a bit tiring, but not overly so. I liked Damon as well, but he had a couple of moments I was iffy about, one of which was in regards to a character named Alec who had once been his sub. No, there’s no cheating or anything like that, but of all people to be part of Oliver’s care, Alec was the last one who should’ve been.

The romance between Damon and Oliver is very sweet and there are quite a few “aww…” moments that will have you smiling and maybe a little teary. Characters from the first two books (Callum, Lee, Adam and Joe) are in this one briefly, with Adam playing a bigger part than the others. The way the author handled Oliver’s injuries – both physical and emotional – was well written. There wasn’t a rush for them to have sex and I will say that had that happened, the book wouldn’t have worked for me after all that Oliver went through during his captivity. The way the relationship between Damon and Oliver played out was done extremely well. Sure, there were a couple of unrealistic moments, but in the end, it all came together beautifully.

The only negative I have in regards to this book is something others might not have even noticed. With the story taking place in Florida (in the U.S.) there was quite a bit of non-American lingo used throughout by characters who were born and raised here. This is something an editor should’ve picked up on. Or it could’ve been only in my review copy. Either way, it’s something I noticed because I speak daily with my Aussie blog partner and our lingo is quite different. 🙂 It didn’t take away from the story at all, but it’s something that stood out for me. My mentioning it is not a dig at the author (I think she knows this), but it’s something that I couldn’t not point out.

It’s no secret that I’m a big fan of this series. I got sucked in with the first one and am always eagerly awaiting the next. There’s something about these characters that draw you in on the first page and you can’t put the book down until you see how everything plays out. That was definitely the case with Pure Innocence.

As with the other two books, I love the cover.

Thanks, Sue. I always love doing them for your books. I have to force myself to not do too many.