A Bear in the Woods (Smokey Mountain Bears #1), Toni Griffin 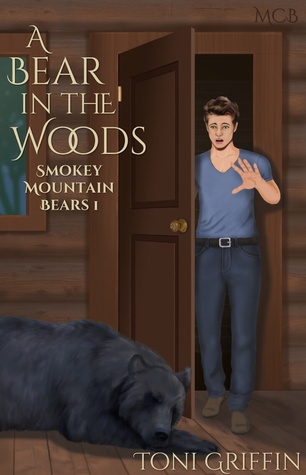 Vincent Marsden is a gay romance author with writers block. After being forced to take a vacation by his best friend, Vincent arrives at his destination. A stunning cabin in the Smokey Mountains. Vincent starts to think there could be something to this whole vacation thing until he steps out onto the balcony and comes face to face with a sleeping bear.

After being attacked and drugged Christian Packard finds a safe place to sleep it off. When he wakes, the last thing he expects to find is his mate. Between Vincent’s uncertainty about the world he’s suddenly found himself in, and someone out to kill Christian, they have their work cut out for them on the road to their happily ever after.

I was looking for a quickie to read and found this as a freebie on Amazon. The blurb looked cute so I downloaded it. I’m really glad I did, though I did have an issue or two with it. I’ll come back to that.

Vincent is a writer who hasn’t done much writing lately. His muse has disappeared and he’s kind of gotten into a funk all the way around. He lives in Vegas, but has never been one for gambling. He’s just…. there. His best friend Mandy calls him and strong arms him into going on a ten day vacation to the Smokey Mountains. It’s already paid for so he can’t say no, right? Grudgingly he agrees to go and this is where the story begins.

After one problem after another with his flights he finally arrives at the large cabin in the mountains. It’s the middle of the night and the end of the most stressful day of his life. He rushes to check out the place, making a point to step out on the balcony. It’s dark, so he can’t see much, but what he does see? A big, black bear sleeping on the end of the balcony. After screaming out in fear, he rushes back inside and locks the door. Of course, this wakes the bear up, who is more than a little disoriented. How in the world did he end up on a second floor balcony, and why can’t he remember anything about the previous few hours? See, the big, black bear is Christian and Christian just happens to be a shifter. He shakes his head to clear it and shifts back to human form to get out of Dodge, so to speak. When he does, he smells the sweetest smell he’s ever smelled in his almost thirty years. A smart bear, Christian knows he’s scenting his mate. But the sound he just heard – the screaming – wasn’t that a woman’s scream? Christian is gay and while he knows that Fate decides his mate, he’s more than a little discouraged at the thought of spending his entire existence with a female. Well, lucky for him the scream came from Vincent and Vincent definitely isn’t a female.

Christian shows up at the cabin the next day – in human form – and there’s an instant connection between the two men. Vincent can’t understand the pull. He doesn’t do one-night-stands, nor does he ever feel this comfortable with anyone so soon. Everything is going great. The men have had a great day and are really getting to know each other. Then Christian shares his secret and Vincent has a big meltdown. Throw in that someone is trying to kill Christian (remember the drugged on the balcony thing?) and it takes a little while for these guys to finally get it together.

This is a really cute story. You’ll get sucked into the characters right off. My only issue with it is the total lack of editing. I get that it’s a short story, but there are some places in this book that look as if they weren’t gone back over even once after the first draft was written. I know this was originally part of an anthology so I’m going to hope the anthology copy was cleaned up much better than this one. Book #2 in this series has a secondary character from this one and I’d really be interested in seeing his story play out. However, the cost ($3.99) for an 80-something page novella is a bit much for something I’ll be reading merely out of curiosity to see where that particular character goes with his own man. I may purchase the actual anthology it’s in or I may hold off.

Overall, a nice shifter story. Vincent isn’t the most likable guy (in my opinion), as he’s a bit too whiny for my taste. Christian, on the other hand, is great. I also liked Christian’s family.