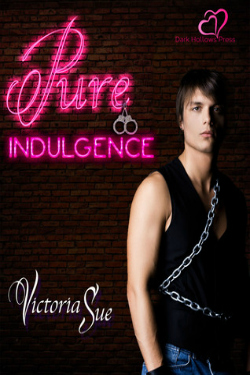 This review is a bit on the NSFW side.

Joe, an ex-detective and a popular Dom, wasn’t gay. Not one little bit. He told himself that all the time he fought the inexplicable attraction he had for the gorgeous young submissive, Adam. Yet when he learns a psychopath responsible for two murders has set his sights on Adam, and Adam disappears, it suddenly seemed far more important to tell him something else.

Joe realizes Adam has become more important to him than his next breath, but if he can’t track down the psycho that was torturing and murdering submissives, Joe won’t ever be able to tell Adam anything else again, it will be far too late.

As the blurb states, Joe is an ex-detective and a Dom. He just retired from the police force to be the manager at his best friend’s private security company, Stealth. Joe has two failed marriages behind him and has been picking himself up after being practically wiped out by wife #2. He’s finally getting his financial life in order and can devote the time needed to help Callum (the best friend) with the running of Pure, the new club owned by Callum. Oh, and Joe’s not gay. No way. No how. The feelings he gets when he sees the sub Adam? So what if they’re a bit confusing?  So what if he gets massive erections every time the guy is in sight? He is not gay! Yeah, he tells himself that a lot throughout the story, but Joe is definitely gay or at least bisexual. I’m not usually one to enjoy books that have a character going back and forth denying his feelings, but with Joe? I loved every single second of it. The reason I did is because regardless of his confusion, Joe never treated Adam with anything but respect and kindness and he was upfront about his confusion from day one. Well, there is one instance late in the book, but there were reasons for it. Sure, it was one of those moments where I wanted to smack Joe upside the head, but again, there were reasons for his behavior and thankfully that didn’t drag out for long. Had that not happened, the rest of the story couldn’t have played out so it most definitely was not an issue.

The readers are introduced to Joe and Adam in Pure, #1 in the series. Pure was Callum and Lee’s story, but it was pretty obvious that there was some underlying tension between Joe and Adam. Joe was this big, bad – straight – Dom, and Adam was this flamboyant sub who went about his business doing his thing, seemingly not caring much what others thought. I say ‘seemingly’ because in Pure Indulgence, bits and pieces of Adam’s past are brought out. I found myself teary more than once while reading about certain things in regards to his childhood. I won’t spoil it, but suffice it to say that the supposedly happy man was hiding a lot of pain behind those smiles.

The book starts out with Joe battling his attraction to Adam. He doesn’t understand it and there’s this internal battle going on that he’s trying to come to terms with. Every time he’s around the guy, he’s tied up in knots. Why? He’s never even considered being with a man before, but those failed marriages? There was always something missing. He eventually discovers what that was as he allows himself to just feel for the other man.

After leaving the club one night, Joe sees Adam on the side of the road with a flat tire. He helps him out and insists on following him home. Adam fights him every step of the way – his place isn’t exactly a mansion – but eventually gives in. When they arrive at Adam’s apartment, everything changes. The place is trashed and there’s blood on the wall. Only later (after the police arrive) does Joe find out that Adam has been receiving threatening notes. There’s no question where the sub will be staying for the time-being. When it becomes known to everyone at Pure that subs have been going missing in other areas, things get real. Missing is bad enough, but bodies start turning up. Joe makes it known that Adam won’t be going anywhere and will be staying with him for the foreseeable future.

Joe gives off a lot of mixed signals with Adam. When in Dom mode, he takes care of him, but doing a scene with a man is brand new to him. How can he want to hold, kiss, and make love to this man when there was never any indication of male attraction before now? None of that matters after awhile. All that matters is keeping him safe and being with him.

Adam is an absolute delight. I’ve read a lot of books and I have quite a few favorite fictional characters, but Adam ranks up there pretty high for me. All he wants is to be loved, cherished. He puts on a good act at the club and around others, but somehow Joe is able to see what others don’t. When Joe does something (mentioned above) without preparing Adam in advance, things go south quickly. Adam’s heart gets broken and he assumes that Joe is just like all the others who’ve let him down in his short life.

Adam disappears and everything changes. Did he just take off for a little while to nurse his broken heart? Or was he taken by the person who has been kidnapping and murdering submissives? Joe and Callum and others fight like hell to find not just Adam, but the person responsible. This puts Joe in a tailspin. Why did he fight his feelings for so long? Why didn’t he just tell Adam how he really felt? Will he find Adam before someone hurts him as they did the others?

The resolution was perfect. I admit to suspecting who the bad guy was early on and I turned out to be right. However, the author threw out enough clues in regards to other characters that I was never completely confident in my assumptions. Anytime I’m left guessing until the end, I’m happy. I don’t like books where the bad guy is glaringly obvious early on. 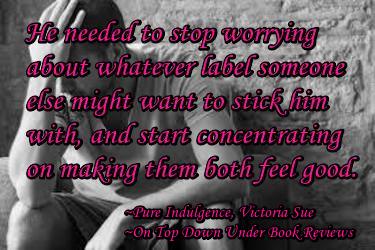 I loved catching up with Callum and Lee again. I loved watching Joe battle himself over his feelings for Adam, but knowing that he would eventually do the right thing. Sure, he had a couple of bonehead moments, but he made up for them in the end. Adam, I simply adored. The mystery was written extremely well and I (as I said above) love how all that played out. The sex scenes are written perfectly, as they were in Pure. There aren’t a lot of them in Pure Indulgence, but there doesn’t need to be. The story is about Joe and Adam finding their way to each other, not page after page of sex. Sometimes books need (in my opinion) more on-page sex, but definitely not in this case. The intimacy is there, but it’s sweet, it’s caring, it’s just taking care of each other. Don’t get me wrong, there are quite a few hot scenes in the book (not off-page), but had anymore been added they would’ve taken away from the story for me, I believe. I should also point out that the BDSM in this book is extremely light, so if you’re not a fan of BDSM books, this one should still work for you.

I won’t give the ending away, but was perfect and I got a little teary. It was a definite “Aww…” moment for me.

Overall, in case it hasn’t been made obvious to this point, I absolutely loved this book. I had a few niggles with Pure, but not enough to take away from my enjoyment of that story as a whole. With Pure Indulgence, there’s not one thing I would want to see changed. It’s an excellent book about two amazing characters. I’m very eager to read more by this author.

Yay! You got a 5 star read. This sounds really good and I think I’d enjoy this one as well. Nothing like a good mystery and some… fun as well 😀
Nice pics/quotes.

Thanks. After seeing Joe and Adam a bit in the background in PURE, I was eager to read their story. It was really, really good. Everything from their coming together to the mystery and everything else, it was a very enjoyable read. You would definitely enjoy it.