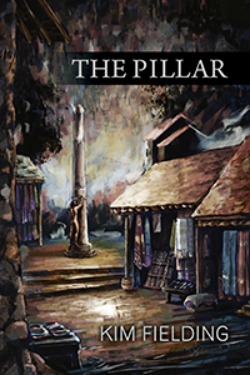 During his youth, orphaned thief Faris was flogged at the pillar in the town square and left to die. But a kind old man saved him, gave him a home, and taught him a profession. Now Faris is the herbalist for the town of Zidar, taking care of the injured and ill. He remains lonely, haunted by his past, and insecure about how his community views him. One night, despite his reluctance, he saves a dying slave from the pillar.

A former soldier, Boro has spent the last decade as a brutalized slave. Herbs and ointment can heal his physical wounds, but both men carry scars that run deep. Bound by the constraints of law and social class in 15th century Bosnia, Faris and Boro must overcome powerful enemies to protect the fragile happiness they’ve found.

The Pillar is another wonderful story from the amazing Kim Fielding. Normally I’m not a huge fan of historical stories, but I would read anything this woman writes.

I love Kim Fielding’s characters. She always makes me fall in love with them. And I always want the best for them. Faris and Boro are no exception.

Faris, a former thief, is now the town healer. His past weighs heavily on him and he doesn’t see himself in a good light because of the things he’s done in the past. Nothing he’s done since seems to make him see what a wonderful, caring person he is. It’s hard not to love him, in my personal opinion. He rescues Boro, a slave, from the pillar of punishment and cares for him until he’s healed.

Boro is a former slave. His life has not been easy at all and he’s had his own things to deal with. He lost a lot because of war. But he’s not defeated, not yet anyway.

“For ten years, nobody has touched me except to hurt me. Nobody except you. Please, Faris.”

The two men become close as they spend more time together. It’s beautiful and what they have is very special. This is something Kim Fielding always does well and it’s one of the reasons I’ve loved every book of hers that I’ve read.

Some of this story is hard to read. It’s heartbreaking, and harsh at times. Things happen that make you want to scream. And when Faris is accused of stealing something by Boro’s former master, I was definitely worried for him.

The ending is lovely. I was really happy these two got their well-deserved HEA. Faris and Boro definitely deserved it.

Would I recommend this? Hell yes! You don’t have to like historical stories to enjoy this. Not when the writing as beautiful as it is here and the characters are as lovable. I can’t give it less than 5 stars. I’ll definitely read this again.

A copy of this book was given to me by Dreamspinner Press in exchange for a fair and honest review.

This sounds like a really good book, Trisha. I’ve read one novella by the author and I loved it. Nice review 🙂

Thank you, Kazza! 😀
I’m glad you loved the novella you read! I can’t wait to read more of her books. 😀

This does look really good. I can tell it would get to me in a few places. Nice review. I love the cover.

Thanks, Cindi! I think you’d like this. And yes, the cover is amazing! 😀