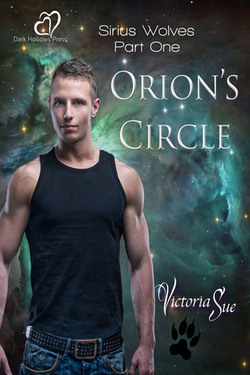 Orion’s Circle starts with young Aden running for his life. The omega of his wolf pack, he’s sport to the Alpha and others. They chase him just to have fun with him. This, after he’s been kept in a cage and treated so bad your heart will break a little as it comes out in the story. After running from the others for a long time, he finally gives up. He falls down and allows his pack to find him, the entire time hoping for death. He’s weak from starvation and beatings and he just can’t take it anymore. When he believes he’s finally going to die, he hears the voice of a stranger coming from a few feet away. The stranger is a big guy, but Aden doesn’t smell wolf on him so he’s convinced he’s a human. Knowing the man has no hope of surviving any type of attack from his pack, he eggs them on to get their attention back on him. Of course, there was no need. The stranger shifts into a gorgeous black wolf and destroys, with a little help from two other wolves, the Alpha and most of Aden’s pack. 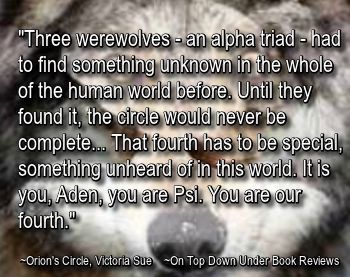 The stranger/black wolf is Blaze. The other two are Darric and Conner. They take Aden back to their place and nurse him back to health. Aden’s pack had done a number on him and it takes a little while for him to get his strength back. The three men (wolves) bring out feelings in Aden he’s never felt before. Only after Blaze explains things does he discover that it’s because he’s the mate of all three. According to legend, Blaze, Darric and Conner are the most powerful wolves in the world. In order to complete their circle, they need what they refer to as a Psi. The Psi is Aden. Once the circle is complete, the four wolves will be the rulers of sorts of all werewolves in existence. Aden is understandably confused. Not only is he a weak omega (in his opinion) but he can’t even shift to wolf form like others can.

“Orion’s circle will be the ruling center for all werewolves. Whist we expect individual Alphas to govern their own packs, we want to regulate a lot of things. Punishment, opportunities for development.”

Blaze is the only pure wolf left and while all three wolves are Alphas, he is the most powerful. There’s nothing muddying up his bloodline (so to speak) so this makes him a powerful Alpha. Conner and Darric have their own powers of sorts. What would Aden bring to the table? In a sense he’s like Conner, but each man plays an integral part in bringing the circle together. Only by reading this would you know what I mean.

The four together are really sweet. Sure, there’s a lot of confusion for Aden, but (because I love a good, sappy romance) I loved all of them together. It’s not often I can read a book with multiple partners where there isn’t a bunch of jealousy or other issues brought into the relationship. There’s nothing between these men other than love and pure want. They all work beautifully together. That is, when Aden isn’t having a moment and doubting that he’s the right one to complete the circle.

Aden doesn’t fully grasp the significance of Orion’s Circle and Blaze, Darric and Conner. Or maybe he does, but this doesn’t stop him from being confused. Not just confused, but with a constant “I’m not good enough for these guys” type of attitude.

Then there’s Aden’s old pack – the same pack that treated him terribly for so long. When he was rescued by Blaze and the others, he left his best friend and his family. Said best friend is used (in a round about way) to con Aden later and he ends up trusting someone he shouldn’t and it hurts him as a result.

Another important part of this story is the fact that Blaze and the others in the circle are trying to integrate wolves into the human military. Between a bad senator, to the psycho doctor from Aden’s old pack, there’s quite a bit of drama. Of course, the senator and doctor have their own agenda and this is explained in the story. 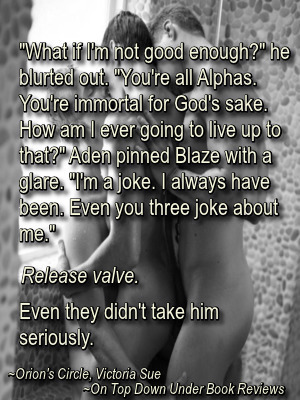 This book is billed as MPreg and I’ll be the first to say that I’m not usually a fan. Oh, my blog partner is, but this is one of those things that she and I don’t usually share when it comes to the books we read. However, I found the way it was written in this story was fine. Granted, it was only brought up toward the end so it hasn’t been fully developed yet, but it has to be noted in my review.  I’m actually eager to see where the author goes with it. Hell, I’m eager to see where she goes with the story as a whole.

I loved all of the main characters with the exception of Aden. While I liked him well enough, I found him to be a bit naive, which is understandable considering the life he’d known up until he met his mates. Speaking of mates, I am a sucker for a good shifter book where finding one’s mate is central to the story. Not only did Aden have one mate, he had three, which made the story even that much better for me.

Overall, a very nice story. A lot of things were left unsettled, but that’s par for the course with the first of a series so I had no issue with that. I ended this eager for the next book. Thankfully, with the release date coming up soon, I don’t have to wait for long. Note that I purposely left out a lot of details in my review. While I could’ve laid things out more, I feel that in order to understand it adequately, you’ll need to read the book yourself. I recommend that you do just that. 🙂

This sounds really interesting Cindi, I don’t read enough shifter books but you’ve piqued my curiosity with this one. Thanks and great review.

Thanks, Paul. This is quite a bit different from other shifter books I’ve read. I really enjoyed it. I’m looking forward to the next in the series.

That’s what grabbed my attention Cindi, I just realised that I stumbled upon this book on GR and because I have a brain like a sieve I couldn’t remember the name of it or find it again. Then thankfully you’ve done a review on it. I do tend to stray from were shifter novels but this sounds great and with this glowing review I must now read it 🙂

I hope you enjoy it as much as I did, Paul. Like you, I tend to shy away from shifter books because “more of the same” gets old pretty quick. Thankfully the author made this series quite a bit different from the norm. I can’t wait to hear your thoughts.

WOWSRES Cindi, I just just finished this 5 minutes ago and I’m straight onto book #2.
You were so right, this really is one of the most original were shifter books I have ever read. As I’ve said I steer clear of M/M were shifter novels and don’t like MPRG either but this was so well done I absolutely loved it.