Against the Grain (THIRDS #5), Charlie Cochet 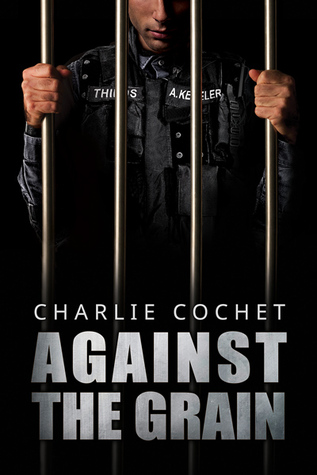 As the fiercest Defense Agent at the THIRDS, Destructive Delta’s Ash Keeler is foul-mouthed and foul-tempered. But his hard-lined approach always yields results, evident by his recent infiltration of the Coalition. Thanks to Ash’s skills and the help of his team, they finally put an end to the murdering extremist group for good, though not before Ash takes a bullet to save teammate Cael Maddock. As a result, Ash’s secrets start to surface, and he can no longer ignore what’s in his heart.

Cael Maddock is no stranger to heartache. As a Recon Agent for Destructive Delta, he has successfully maneuvered through the urban jungle that is New York City, picking up his own scars along the way. Yet nothing he’s ever faced has been more of a challenge than the heart of Ash Keeler, his supposedly straight teammate. Being in love isn’t the only danger he and Ash face as wounds reopen and new secrets emerge, forcing them to question old loyalties.

Against the Grain is the fifth book in Charlie Cochet’s THIRDS series. I’m a huge fan of this series. It’s addictive and I love the characters and enjoy seeing what they get up to, both good and bad.

Against the Grain is a little different than the first four books. This time, we get Ash and Cael as our MCs instead of Dex and Sloane. Honestly, it was so good to get these two at last. It feels like it’s taken forever for them to get to their own book. This series is one of my favorites. It’s got extremely likable characters, laugh out loud moments, great story lines and enough sexy times to keep you happy.

This book picks up where Rise & Fall left off, only it switches POV. The opening scene is funny, but then it turns very fast and we lean some things about Cael and the Maddock/Daley family that we didn’t know before. I wanted to hug Cael when Tony was telling Ash about Cael’s past.

Things between Ash and Cael are better than they were in the last two books, but there are still issues. Ash is still fighting his demons and it’s causing problems between him and Cael because of his fears. But Ash is determined to get past them so he and Cael can finally be together.

We get to see a different side of Ash here. A side we got a tiny glimpse of in Rise & Fall. It was hard to not love him when you find out everything he’s been through and how much he suffered. His relationship with Cael brings out his softer side. But there are times, even when Cael isn’t there, when you see a gentler side to him. And of course, you get to see the relationship with Dex through Ash’s eyes.

“Hey Ash.”
Ash turned, studying Dex and the wide smile on his face. He braced himself.
“You hugged me.”
Ash held back a smile. “Don’t let it go to your head. It was a momentary lapse of judgement.”

Cael and Ash are so great together! The two of them are really sweet and cute together. Their relationship has grown a lot since the beginning of the series and it’s so good to see them happy at last. They supported each other a lot through this book and while they still had their ups and downs, everything really worked out well.

We get some really nice family moments in this book. Family moments that managed to break my heart and make me smile. The dark times in the Maddock/Daley house were brought up here and it really showed a new side to Dex and Cael’s relationship and Tony’s relationship with his boys. I love the close relationship Dex and Cael have and I loved it even more in Against the Grain, because there was pain here, a lot of pain.

God, Cael had been such a despicable jerk to Dex. They had so many arguments. One in particular stood out among the rest. His hurtful words to his brother echoed in his head. He’d never forget them. You’ll never understand me. You’re Human, and what’s more, you’re not even my real brother.

I love seeing the team together and hearing about their personal lives. Poor Hobbs went through a lot during this book. I had the urge to climb into the book and hug him tight and make it all better. All because of Rafe, who I wanted to strangle. What he did made me so angry! And I’m not sure if I’ll be able to like him after what happened in this book.

Great review Trisha, I too love this series and have been waiting for this book for ages. I didn’t know it was already out 🙂 I’m so excited and happy to hear it’s about Ash and Cael too. Cael is one of my favourite characters, he is too cute for words. I’m not usually a big fan of series that give every single couple their own POV novel, but THIRDS is different in this regard and it’s the first one with a fresh POV beginning at book 5. Charlie Cochet’s writing made this one of my first M/M, paranormal shifter… Read more »

Thank you, Paul! 😀
I’m glad you love the series, too. I think you’ll really like this book if Cael is your favorite character. This book is great for him, imo.
I agree with you there. I’ve never loved a shifter series like I love this one. I’m more of a contemporary girl, but man, these books are amazing. And I love Dex. He’s one of my favorite characters ever and I just love getting more of him and the rest of the characters.

I finally read it Trisha, it was absolutely AMAZING and I gave it 5 stars too. Your review is even more amazing after reading it. It’s now my favourite THIRDS books although I did have slight Dex withdrawals at least his appearances were still HILARIOUS!
Oh poor Cael and Ash, I think they were made for each other and I loved the insight into the nastier underbelly of some of the THIRDS in senior positions too 🙂

SO glad you loved it that much! My Dex withdrawals weren’t as bad as I thought they would be, but only because he had a couple of really amazing scenes in this! 😀
Now we have to wait until next year for the next book!

Going into this book, we’re already very familiar with both characters, but painful new things are still revealed on almost every page and their distance becomes far more understanable with each new revelation. I never expected Cael to have so much pain in his past, not with his father and brother, but Cochet subtly reminds that we’re all vulnerable and that even the best of us can end up in vicious cycles until we hit rock bottom.

Agreed! I’ll admit, I never expected Cael to have such a hard past. But I love that Charlie keeps surprising us. 😀