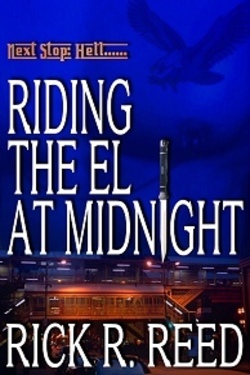 When the gorgeous, fire-maned, and twisted Mark boards a nearly deserted el train, he is looking for love in all the wrong places. And finding Julio aboard that same northbound train is the answer to Mark’s dreams.

But are his dreams really nightmares? And what weird secrets does the mild-mannered Julio hide beneath his attractive and charming exterior?

When these two strangers encounter each other, it sets forth a derailment of desire and an explosion of colliding perversion. Even being near this combustible duo could have dire results for the unwary. Are you brave enough to embark on a suspenseful journey where blackness presses in at the windows, hungry for admission? Then prepare yourself for a trip into a sexual netherworld where nothing is quite as it seems…and where two sexy and darkly original travelers speed on a descent into hell…

This is classic Rick R. Reed and exactly the type of book that drew me to his work way back when. I should point out that this is in no way a romance and it has some pretty intense scenes. Keep that in mind before reading it.

Mark is a young man who gets off on violent sex. The more painful and disturbing the better. His plan is to find a partner on the train later in the evening. Mark’s background isn’t elaborated on much (believe me, it doesn’t have to be), but the author threw out just enough to tell the reader why he is the way he is. 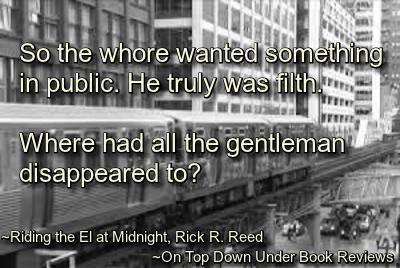 Then there’s Julio. While Mark wears his leather and chains, Julio is clean cut and refined in his suit and perfect clothes. Unlike Mark’s long red hair, Julio keeps his cut in the perfect style with not a hair out of place.

The two men are as different as night and day; in appearances anyway.

Mark grabs his toys and makes his way to the train. Inside, he sits and waits for the perfect man. It doesn’t take long before Julio shows up and Mark knows the night won’t end without doing all the warped things he wants to do with the prim and proper looking guy.

Only things don’t exactly go as planned for either man.

I can’t say more than that about this story. It’s only 24 pages and I won’t post spoilers. I will say this, though – I read some reviews of this book on Goodreads and Amazon. There are quite a few comments about the ending. Some loved it, but a lot of folks hated it. I’m not getting why some hated it. When I said above that this is classic Rick R. Reed, I was referring to the fact that in his horror books he always throws out something unexpected in the end. I, for one, kind of get sick of cookie cutter endings in books which is why I started reading his horror in the first place. Personally, I thought the ending was brilliant. 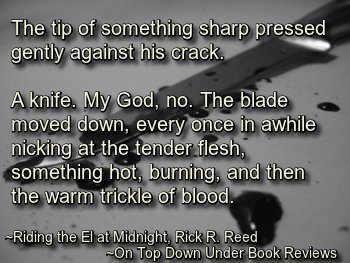 It’s no secret that I’m a big fan of this author. From his horror to his sweet romance, I’m always entertained. Riding the El at Midnight was the perfect quickie. I highly recommend it if you’re a fan of these types of books and don’t mind being thrown for a loop once or twice. You may think you know what is about to happen, but you’ll be wrong.