Only the Lonely, Lynn Kelling 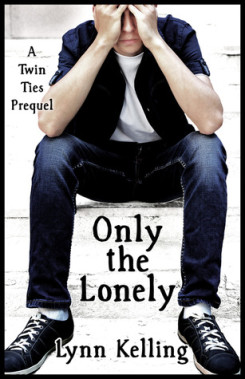 Evan Savage is a young teen desperately searching for something to hold on to and a way to be noticed. Living in rural Whippoorwill, Pennsylvania, his only family is an absentee father who leaves Evan alone for days at a time while away for work. Friendless and bullied at school, with only a nearby preacher named Jimmy to look out for him; Evan gratefully accepts attention wherever and however he gets it. Sometimes it feels like part of him is missing, and every day the void consumes more of Evan’s ability to fight back against his circumstances. While looking at himself in the mirror within a recurring dream, his reflection keeps reaching out to him with happiness he doesn’t feel, from a world different than his own, though much less tangible. Anonymous sexual encounters with strange men satisfy Evan’s need for company and reassurance that he’s someone worth wanting, as well as test his boundaries. But, faced with the growing temptation to slip away for good, it’s up to Jimmy, and Evan’s dream-world counterpart, to try to keep him there.

A short review as Only the Lonely is 16,000 words but it also packs a punch in that word count.

The house was silent. Evan’s father, Charlie Savage, was on a work trip again. It would be days before another soul would stir the still air of their small home.

If you know this series you know the content is taboo and deeply psychological. You also know there will be a younger Evan having sex with predatory men. You know there will be a suicide attempt in this book. You know that Evan is lonely and has abandonment issues. If you have a problem with these things I doubt you’ll be familiar with the Twin Ties series anyway, but I’m mentioning it just in case. This is the lead in to some of the issues Evan has had going on inside and is slowly trying to deal with.

Evan has always been fascinating to me, from the very first page of the very first book I felt for him. It’s ironic, because normally he would be way too young for me to read about in the main body of any series, in his late teens, yet here he is in 8th grade, or fourteen years old, and I’m still buying a ticket on the Twin Ties bus. Lynn Kelling has sold me on the series and I’m thoroughly invested. The

enigmatic and caring Jimmy is on the scene, I can’t get enough of Jimmy and that’s further cemented after reading this novella. I want more of him, I just feel there is so much depth to him and I still can’t get to the bottom of it. There are cameos by other characters in the series, mostly not by name, and Evan doesn’t know them yet. It was interesting to grab a snippet here and there. There is a preternatural connection with his mother and as yet unknown to him twin brother, Brennen.

The primary component to Evan, to this story, is he’s left alone by Charlie, his dad, who works away from home. A lot. Jimmy, who’s a friend and a voice of concern and reason,  steps in to make 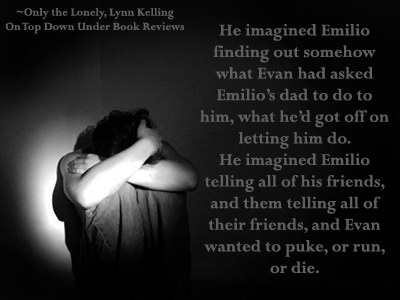 sure Evan is looked out for as much as he can, as much as Evan will let him in. However, trying to look out for a fourteen year old who feels so isolated and self-loathing isn’t enough. He needs someone else in his house for regular guidance, love, and care. He’s also on the outer with kids at school, bullied, and he turns to online chatrooms to meet older men who tell him he’s special in order to get their fix with an underage piece of arse. Evan looks for love in all the most emotionally destructive places. Lynn Kelling doesn’t hold back on how sad, confused and potentially dangerous Evan’s life is. How easy it is to be preyed upon, and for kids to feel like it’s all their fault. It’s heartbreaking to read as a fellow human, let alone as a mother. In a lesser author’s hands it could have been gratuitous. It wasn’t, because it’s Lynn Kelling and she’s a strong, empathetic writer who loves her characters. It touches your heart and makes you want to wrap Evan up. It may make some of us remember our own conflicted childhood. It all comes to a crescendo and then… Well, if you haven’t already, you go and grab My Brother’s Lover.

The last two Lynn Kelling books have been so dark and emotional. I love a good psychological read, I seek them out, and both Caged Jaye and Only the Lonely make you feel at a deeply visceral level. This prequel helps the reader see more of how/why Evan has this aura of sadness throughout the Twin Ties series, and how he’s also progressing now. This novella takes you that much further into Evan’s head and background than the previous books have been able to, although Drew crawled out of the woodwork in the last book. Evan’s plight is based on reality, there are plenty of Evan Savages who are left alone and have a very limited support network at a time when they need it the most. Recommended for people who are as addicted to Lynn Kelling’s writing, as I am, who are probably hooked on this series – or would like to be – and those who can read it and think, ‘Shit, how am I reading this?‘ but continue on because they just have to. Because it’s powerful stuff. 4 Stars!

I could easily tell by reading your review that my mom instincts would kick in and I’d want to take Evan in and protect him from the big, bad world.

Great review, as always, and I love the pics and quotes. I know how much you love this series.

Thanks, Cindi. I do love this series. It’s an absolute must-read and breaks down all my normal issues about series with the same characters.

Oh yeah, I had to be a reader first and mum second. Gah! 🙂