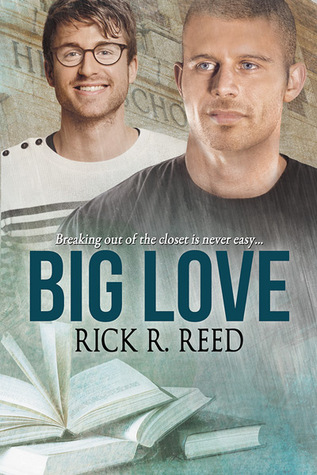 Teacher Dane Bernard is a gentle giant, loved by all at Summitville High School. He has a beautiful wife, two kids, and an easy rapport with staff and students alike. But Dane has a secret, one he expects to keep hidden for the rest of his life—he’s gay.

But when he loses his wife, Dane finally confronts his attraction to men. And a new teacher, Seth Wolcott, immediately catches his eye. Seth himself is starting over, licking his wounds from a breakup. The last thing Seth wants is another relationship—but when he spies Dane on his first day at Summitville High, his attraction is immediate and electric.

As the two men enter into a dance of discovery and new love, they’re called upon to come to the aid of bullied gay student Truman Reid. Truman is out and proud, which not everyone at his small town high school approves of. As the two men work to help Truman ignore the bullies and love himself without reservation, they all learn life-changing lessons about coming out, coming to terms, acceptance, heartbreak, and falling in love.

I’ve often said that Rick R. Reed is my comfort author. All readers have comfort reads, and I do as well, but no matter what is going on in my life I can usually get involved in one of Rick’s books. It doesn’t matter which one, I’m always entertained. I’ve not been around much lately for a variety of reasons but I couldn’t let too much time pass without me reading Big Love. I got so involved so quick that I almost read it all in one sitting. Yes, it’s that good.

Big Love is about three key characters – Dane, Seth and a teenage boy named Truman Reid. Each character is important but I have to say that it’s been a long time since I’ve had a character affect me like Truman did. I dare anyone to read this book without getting teary at least once in regards to him. 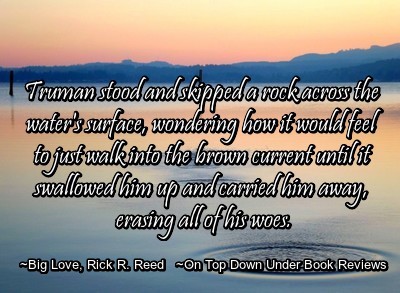 Truman is a freshman in high school and he’s out and proud. He lives with his wonderful mother, Patsy, who gave birth to him when she was just a teen herself. They don’t have much but they have each other. Truman’s mother knows that her son isn’t popular with the other kids at school, and she knows he experiences some bullying, but she doesn’t know the extent. She’s always there to wipe his tears and remind him again and again that he’s perfect just the way he is and that the others are the ones with the problem, not him. She always soothes him at home but she’s not with him every minute of every day. School for Truman is a living nightmare.

On his first day of high school Truman wears a t-shirt that shows everyone that he is (as I said above) out and proud. This, of course, has the homophobes bullying him almost immediately. Dane, a popular teacher in the school, witnesses a bad incident of bullying and tries to help Truman but the boy just wants to leave and go home.

Dane is married with two children. He seems to be loved by both students and staff at the high school where he teaches. A big guy, he’s like a gentle giant. He wants so bad to help the boy but is unable to. Minutes after this incident Dane’s world is turned upside down when he gets a phone call that will change his and his children’s lives forever. Katy, his wife of two decades, has been killed. 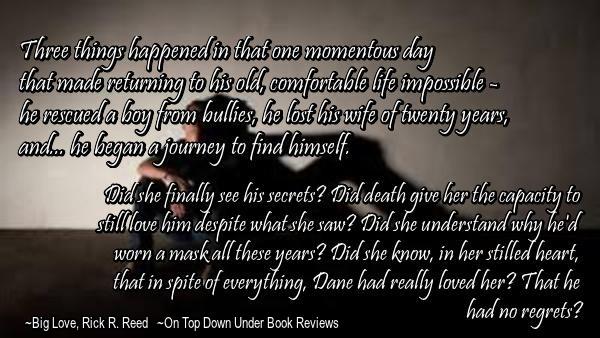 Everything leading up to above had me crying ugly tears. Be warned if you plan to read this.

Now we meet Seth. Seth is running from a bad breakup and has moved to Summitville to accept a teaching position. New city, new job, no ex to bump into. On his first day at the high school he meets Dane and falls hard. I mean that literally. He falls on his ass in the snow and is helped up by Dane. 😉 Of course, Seth falls in another way as well – instant lust for the tall man who helped him up after he fell on his butt. But Dane is straight, right?

Dane has a secret, one he even kept from his wife during all their time as a couple. Dane has always been attracted to men but he never acted on it. He and his wife were college sweethearts who got married and went on to have their daughter and son. With his wife gone, Dane knows that he has to tell his children his secret. He’s tired of living a lie and knows he has to come clean sooner rather than later.

“This might surprise you, but what wasn’t a lie was the love I felt, and still feel, for your mom. When it comes to love, real, pure love, we’re not gay, we’re not straight, hell, we’re not even male or female. We’re human. And I love that woman with all my heart. I always will.”

I need to point out that Dane never cheated on Katy or even considered doing so during their marriage. Sure, he may’ve fantasized about men on occasion but he never stepped outside of the marriage. I’m mentioning that because a lot of people might read this review and assume he cheated on his wife. He didn’t.

Dane finally decides to tell his kids his secret and he’s terrified. He sits down to dinner and decides to blurt it out. Joey, his twelve-year-old son, takes it much better than his sister by a few years. Clarissa is livid, to put it mildly. I had a hard time with Clarissa for a long time in this book. Dane was having a difficult time of his own, but Clarissa wasn’t even willing to discuss it with her father. While I understood all of her feelings  – Does this mean Dane never loved her mother? Why did he lie all those years? – I also found her to be bratty and unreasonable. Thankfully, Joey wasn’t. He may not have understood his father but he was there for him. Clarissa eventually does come around and it’s a very heartwarming (and funny in some ways) moment. Joey also had me cracking up a lot. As a mother of three boys, I had to laugh at some of the things Joey said. It took me back to my own twelve-year-olds of long ago. 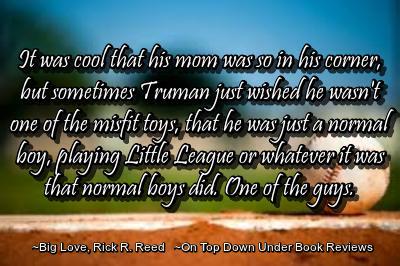 Now we get back to Truman. Truman is being bullied so bad that he’s at his breaking point. The kids in his school are horrible and they never let up on the poor guy. When he finally has enough is when the book takes a big turn. Not only does Dane find himself in a position of outing himself but the situation brings him and Seth closer, though not in the way you might think. Once again I found myself in tears over Truman and his life. His mother tried so hard to make him happy. I can’t say enough good things about Patsy. She was so good to her son. When she couldn’t be there Truman had Dane and Seth. 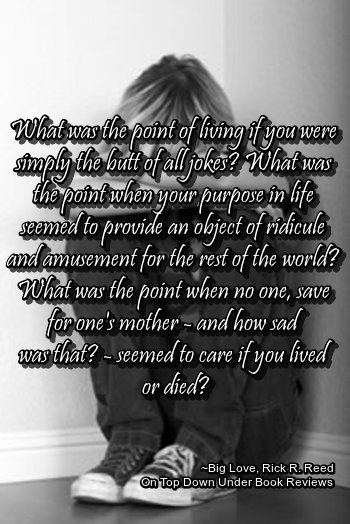 Big Love is definitely a romance but it’s so much more than that. Not only is the reader watching Dane and Seth as they come together, but you’re also watching Truman’s story play out, as well as that of Joey and Clarissa. I lost count a long time ago of how many of Rick R. Reed’s books I’ve read so I knew things would play out well and I wouldn’t be disappointed. However, I admit to wondering how more than once while reading this book. Of course, he brought everything together beautifully and the endings for all parties were perfect. It didn’t take long into the story to have me crying sad tears. I was crying sappy ones when it ended.

I feel like a broken record when I say that this is another great book by this author, but it really is. I’ve not read a lot yet in 2016 but Big Love is definitely one of my new all-time favorite books. It’s about love, family, and helping someone who seems unable to help himself. I honestly don’t know how anyone can read this and not get emotional. It’s simply a fantastic book. I can’t recommend it enough. I also can’t not bring up that the author mentions one of my other faves in Big Love, The Lovely Bones by Alice Sebold. The way it’s used in the story is very fitting. If you’ve read both I’m sure you’ll agree.

Loved the pull quotes and the pics, Cindi. Big Love sounds like a moving story for all the characters in the book.

Thanks, Kazza. It really is a very moving story. Truman absolutely broke my heart. He’s one of those characters you want to wrap in a hug and protect from the big, bad world.

This is definitely a new all-time fave for me. It really got to me. A fantastic book.

This sounds great, nice review Cindi, it sounds like you really connected with this book. I love Rick r. Read so it’s another one to add to the list

Thanks, Paul. I can’t express enough how this book made me feel. I fell in love with the characters on the first page. I hope you enjoy it as much as I did.