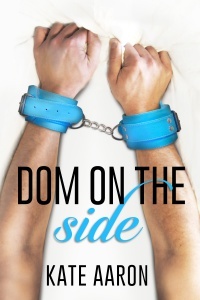 Sameer Farouk is the right guy at the wrong time, and as far as Ryan can tell, not kinky. No matter how clearly Ryan can foresee a future with Sameer, he refuses to settle for less than total compatibility, both in and out of the bedroom. Despite their obvious connection, breaking up is the right thing to do, even if it breaks Ryan’s heart.

Torn between them, Ryan must decide if he’s prepared to gamble everything on one man, or if he’d be better off with a vanilla boyfriend and a Dom on the side.

*Dom on the Side is a prequel set in the Blowing It universe, and can be read as a standalone.

Dom on the Side is set in 2007 London. It’s a step back in time, a prequel to the other two books in the series, neither of which I’ve read, but it’s no issue whatsoever. Ryan lives with his best friend, Owen. Owen wants to be a published author and jumps between personally unsatisfying jobs while Ryan is a primary school teacher at his first placement. Owen is flighty and always thinks the newest guy in his life is (potentially) The One. They aren’t. Ryan is a bit different in that regard, he sleeps around and isn’t interested in commitment. What he is looking for he’s not sure he can have. He’s pretty certain it’s neither normal or right.

I’ll be honest, I put Dom on the Side down around the 15% mark but something made me go back. The same happened at the 25% mark and at that stage I was ready to totally opt out. I didn’t want a book about Ryan teaching eight year olds. I didn’t want a book about Ryan and his best friend Owen. Owen was as frustrating as fuck – I liked him, he pissed me off, I liked him again, he pissed me off again, and so it went. But…  the more I read the more I could not dismiss just how good they were as friends and how age appropriately believable they actually were. So I rolled with the fact these guys are twenty one turning twenty two and I remembered what I was like at that age – kind of, it was a blur. Ryan was a good friend, and Owen, annoying bugger that he was, was a well-meaning, sweet guy at heart. They liked to go out and party, they supported one another, they looked out for one another, a little more Ryan than Owen, but they complimented each other and that helped me keep going and I just connected with that part of the story.

“You’re something, you know that?” he asked, resting his palm on my chest. “I’d love to Dom you one day. You’d be a natural.”
I didn’t totally understand what he was saying, but some instinctive response made me wary.
Jim chuckled. “Don’t look so scared, kid. You ever decide you’re interested, give me a call.”

Jim is close to mid thirties and in a long-term loving relationship with his partner, Gaz, who needs different play than Jim can give. They both have other partners for their particular kink and there is no jealousy or insecurity. Jim is upfront with Ryan that there will be no love, purely domination and submission. He will not leave Gaz and Ryan has to understand and agree to this otherwise there will be no play. Jim was confident without being arrogant, kind while being firm, had the right amount of caring, and was an incredibly relatable, highly likeable guy. It’s nice to see a book concentrate on someone’s personality, not his dick size, not his leather pants, his abs and buns of steel, or his green as freshly mown grass eyes… come on, we all know we’ve read those descriptions a thousand times before. Jim was shorter than Ryan, had a bit of a tummy, he was an average guy with an average-sized dick. He was not someone the attractive and thirteen years younger Ryan would ordinarily look at twice.

His name was Jim, and he was several inches shorter than me, but he moved with such confidence that in my mind he was ten feet tall.

However, as Ryan was carefully and skilfully shown how good being dominated was, how good meeting his submissive desires were, Jim became the total package. The scenes were at Jim’s place, for the most part, and what he used more than anything else was his voice, his commands, as well as his ‘my-word-is-my-bond’ behaviour and attitude. Jim would not abuse his position as a Dom – he told Ryan to ask around to make sure – nor would he screw up the ‘contract’, which was simply a hand written piece of paper. The time Jim and Ryan spent together was hot. Totally hot, and whilst not loving in a life partner context, it was caring and they had great chemistry.

Interestingly, Ryan’s actual love interest, Sameer, was only in this book for about 20%. Technically he was a quick fuck (not on page) at around the 65% mark then he disappeared until later.

A hand on my shoulder distracted me, and I turned around straight into someone’s arms. The guy was cute, about my age with short, neatly cut dark hair and skin the colour of black tea.

Sameer is a uni student and works part-time as a waiter. His parents are Bangladeshi but he’s British born, and he likes Ryan in spite of Ryan trying to distance himself because, in his mind, Sameer would not understand his kink. Sameer would not be into what Ryan  discovered he needs in his sex life. He won’t want to be with someone who has a Dom on the side, and ultimately Ryan wants someone who is both his lover and his Dom. The characters have an open relationship, bear that in mind before picking the book up. Did that create a problem for me as a reader? No. Love manifests in all kinds of ways and I’m a different stokes for different folks kind of person. But you have to know your own limits as a reader.

Okay. Ranty niggle. I took half a star off this book for the slow start and half for what I considered a sometimes preachy undertone to the book.

I knew in my heart he was right: I was well adjusted, had a good job, great friends, and there were no demons in my past I was trying to exorcise. 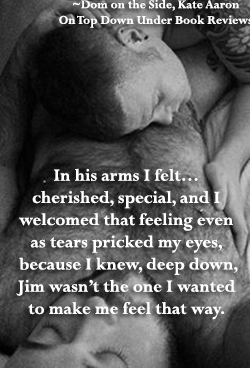 this might be the right book for you. The author takes great pains to be respectful and obviously cares. There are no tragic, broken, messed up people. There is no angst. There are no magic dicks. But there is a look at how someone might feel when they desire something more than vanilla sex. Anyone who steps outside societal ‘norms’ tends to have worries and fears which the author highlights well.

(…) Guilt because I was a good middle class English boy, a primary school teacher, and I was supposed to be setting a moral example, not harbouring depraved lusts. (…)

Overall, Dom on the Side is an engaging book and I enjoyed my time reading it. I am not reading books I don’t like these days so if I didn’t get right into it I would have discarded it/ DNF’ed it with a quick summation as to why. It’s a testament to Kate Aaron’s writing skills that in spite of my slow start, in spite of my ranty moment, I can give the book 4 stars and say it was well written and worth every star I’m giving it. There are some extremely interesting characters 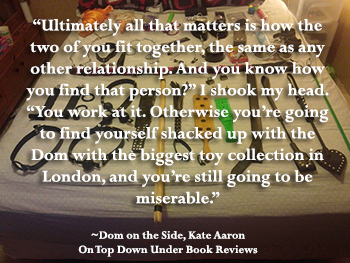 Our Tumblr for extra zing (18 and over. Totally NSFW)

It is a good book. Different. I enjoyed the scenes in the book between Jim and Ryan…a whole lot 🙂
I also have to call them as I feel them, it got a little preachy – for me. Someone else might think, ‘What the hell is she talking about?’ That’s the deal of it all, different outlooks 🙂

At the end of the day, I think Kate Aaron is a very good wordsmith and she makes this book work. I wish she would write more standalone books in general.