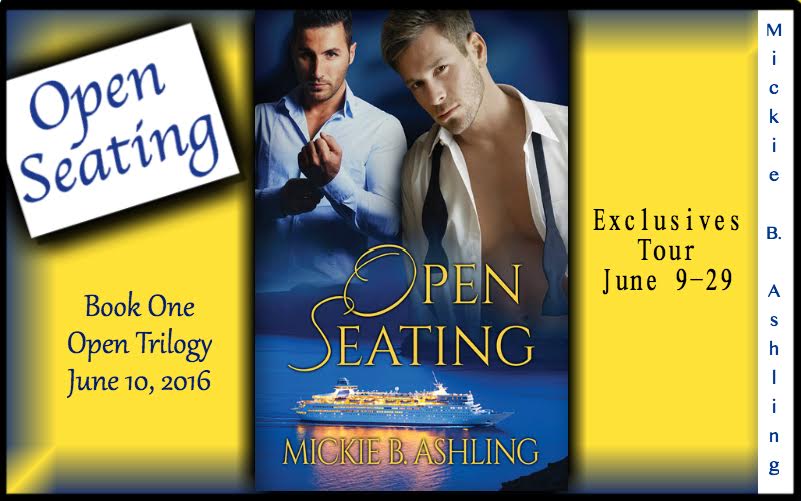 I’d like to thank Cindi and Kazza for giving me the opportunity to appear on their great blog to share an exclusive excerpt from Open Seating, the first book in a planned trilogy. Those of you who follow me know I love to travel, and my favorite way to see the world is on a cruise ship. A story with a luxury liner as a backdrop was bound to come out of my muse eventually; I’m just surprised that it took this long.

As the blurb mentions, my main characters are nothing alike and have been thrown together on this voyage under the worst of circumstances. Fate has presented their itinerary, and now it’s up to them to make it work. Or not.

I bring some fun giveaways and several opportunities to win a freebie by following along on the tour. Before I close, I’d like to mention and thank my publicist J for her excellent work in organizing all my blog tours and anything else I might need in terms of promotion. 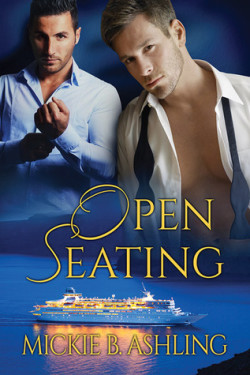 Seth Wilder lost his partner of twenty years to suicide two weeks before a long-anticipated cruise. Cancellation insurance was never purchased, and Seth can’t get a refund. Bryce McFarland, his late partner’s gym buddy, appreciates his predicament, and when asked, agrees to accompany him on the trip. This way, Seth recoups the money and doesn’t have to cancel his plans. The gesture is unexpected but accepted gratefully.

The two men have nothing in common. Seth is a reclusive romance writer, and Bryce is a hard-core Grindr user with major commitment issues. Out of necessity and despite the seemingly insurmountable differences in personality, they develop a tentative rapport. As they begin their journey through the UK, Bryce helps Seth come to terms with his partner’s sudden death while Seth, in turn, discovers the root cause of Bryce’s phobia.

Shipboard romances rarely work. Sensible men resist, sexual tension notwithstanding. But a full moon and late summer breezes lend itself to the impossible situation, barriers are crossed, and a love affair is kindled.

Soon Seth would have to make a decision regarding the house. Did he want to stay, or would he be too creeped out every time he walked into the master bedroom? He’d been sleeping downstairs in the guest room since the coroner took Mark’s body away, and had only used their room to dress. Seth had also stopped using the en suite bathroom until he realized it was impractical to be carting his toiletries back and forth, but even when he caved and began using it again, the feeling of unease persisted. He kept looking over his shoulder, expecting Mark to appear. Not that he believed in ghosts or anything, but his death was too recent, and being in the same location didn’t help one bit.

Throwing in the towel and selling the place had crossed Seth’s mind on several occasions. There was no mortgage, and they’d purchased shortly after they moved in together twenty years ago, so the value of the property had certainly doubled, if not more. Whatever he got from the sale would tide him over for years if he moved to a less affluent neighborhood. A two-bedroom condo or townhouse was really all he needed. Daily expenses would be drastically reduced, and he’d never have to contemplate a day job to augment his income. The idea of working eight to five, or even part-time, was disheartening. If he had to write ten hours a day to increase his production, he’d do it. Anything to avoid the evil day job.

And on that positively repugnant note, he got up and headed for the bathroom. After he showered and shaved, he threw on his white robe and stepped out in time to hear room service knocking on the door. Seth poured the strong coffee into his mug and sighed contentedly after he took a tentative sip. The croissants were warm to the touch, so fresh they practically melted in his mouth. He felt spoiled and decadent, but he couldn’t muster up a shred of guilt. What was it Bryce said about that useless emotion? The guy had more layers than an onion, and each one was as intriguing as the next.

Licking the last of the chocolate off his lips, Seth paused when he heard the beep of the key card announcing Bryce’s return.

“You look refreshed,” Bryce noted with a wry smile. “I ran five miles around the open track above the pool and must stink to high heaven.”

“I don’t smell anything,” Seth said. “How did you know it was five miles?”

Bryce lifted his wrist, and Seth saw a watch-like gizmo with a yellow band.

“It’s a Fitbit,” Bryce informed him. “It calculates your running or walking distance.”

“Right? You should buy one,” Bryce suggested.

“What part of I don’t exercise didn’t you understand?”

“There you go calling me babe again. Makes me feel like a boy toy.”

“Does it bother you that much?”

Seth shook his head. “No, it’s rather amusing.”

“I’d use it to describe someone young and hot.”

Bryce frowned. “I seem to have gotten over my age phobia with you. In any event, you’re not that old, and I think you’re hot.”

“You’re saying that because we’re the same age.”

“Yup, forty is the new thirty.”

Seth laughed. “Get in the shower.”

“You can soap me down,” he suggested helpfully.

Seth scrunched up his face. “It’s too cramped. We’ll end up with a charley horse or a stiff neck.”

“Simmering,” Seth replied. When he realized what he’d admitted, he blushed like one of his virginal heroines.

So busted. “Yeah,” he said softly. “By the time you get out, I should be moving on to a slow boil.”

“Statements like that can get you in trouble,” Bryce warned.

Win a $10 Dreamspinner Press gift certificate, an audio code for a Mickie Ashling audiobook, or an ecopy of one of Mickie’s backlist titles. Three winners! Contest open internationally. Must be 18 or older to enter. 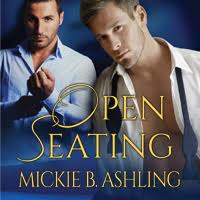 June 24 – On Top Down Under Book Reviews

Hi Kazza! Thank you again for giving me this opportunity. Much appreciated!

It’s always a pleasure to have Mickie B. Ashling stop by. Good luck on the new release!

Congrats on another new series release Mickie. And I have to say the cover look fairly inviting as well. I made it a habit not to read excerpt as so not to spoil the fun in reading the whole story, but the blurb interests me.

Thanks for another great excerpt. And the fitbit reference made me smile. Mine is a slave driver. 😉

I enjoyed the excerpt it was interesting to get a bit more insight to Seth life’s and I could understand his reasoning not wanting to have an EDJ. Also nice to see Seth and Bryce getting on so well!

Thanks for the excerpt and giveaway. Happy book release. 🙂

Thank you for the exclusive excerpt! It sounds like a interesting read. Bryce and Seth are cute together =)

Thanks for the excerpts

I enjoyed this excerpt the most. I am looking forward to the next one./

Thanks for this post and again congrats on the release 🙂