Hi everyone! Thank you for stopping by to help me celebrate the release of Open House. I’m here to share an exclusive excerpt and give you a chance to win a few giveaways. Open House is the direct sequel to Open Seating. These books should be read in order to be fully enjoyed.

As always, I’d like to thank Cindi and Kazza for hosting today’s visit, and my wonderful publicist J for her excellent help in organizing my blog tour.

By the time Seth and Bryce return to Chicago, they’re halfway in love. They decide to move in together to see if their feelings can survive in the real world.

Seth receives word that a mandatory autopsy was performed on his late partner because his death was a suicide. The medical examiner’s findings are disturbing and leave some doubt as to the underlying cause of death.

Because of the suicide clause, life insurance benefits had been denied, but in light of these new findings, Seth’s lawyer advises him to appeal. The insurance investigator turns out to be the man who broke Bryce’s heart twenty-five years ago. The guy has fallen on hard times, and when he sees how successful Bryce has become—and how large Seth’s potential payout might be—he decides he wants a piece of the pie. Bryce and Seth’s new relationship is severely tested in this second novel in the Open Series. 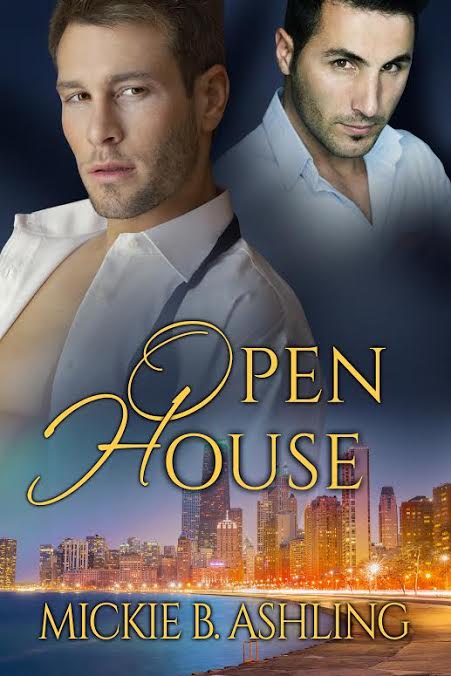 Seth stopped thinking about Owen, deciding Bryce had things under control. He took his time getting ready to go on his shopping spree, making sure he dressed like a man of means who had shopped the store before instead of a clueless newb pawing through women’s lingerie for the heck of it. It was okay to reference Pretty Woman, but to actually live that scene would be embarrassing as hell.

The iconic lingerie store was close to the Museum of Contemporary Art on Michigan Avenue, at least eight city blocks from Bryce’s place on E. Delaware. Seth didn’t mind the walk, glad to exercise muscles that were starting to grow soft again. He made a mental note to talk to Bryce about resuming his quest to get in better shape. He knew they’d both need to make some minor adjustments to their daily schedules, but he felt the benefits far outweighed the inconvenience. Now that he was living with a bona fide gym rat with the libido of a thirty-year-old, he had to keep up.

Seth stopped in front of Victoria’s Secret and studied the different show windows. Whoever designed them had seduction on their mind, and intentional or not, he felt himself being lured into the store. Understandably, Seth had never seen anything like it. He’d given Laurie gifts in the past, but they’d always been of the monetary variety, and since he and Mark didn’t have any female friends or relatives who warranted such intimate gifts, they’d missed out on the rare shopping experience. Perhaps Bryce, who’d grown up with a sister, was more familiar with current female attire. Seth’s historical novels were populated with heroines who were weighed down by petticoats, stays, shifts, and an assortment of other undergarments that had gone the way of the dinosaur.

Twenty-first-century lingerie appeared a lot more practical than the complicated satins and laces of yesteryear. One could find anything imaginable from fun and playful to sexy and edgy in a variety of fabrics and wide spectrum of colors. From spandex, cotton, and lace to buttery soft leather or satin, there was no lack of choice, and each outfit was prettier (and costlier) than the next.

Seth’s head was spinning as he walked through the store, picking up and putting down items that caught his eye so he could appreciate the texture of the fabric. Most of them felt wonderful against his skin, but there were a few that felt a bit too scratchy, and once he pictured said fabric rubbing against his cock, he shuddered and dropped it back on the pile.

Too embarrassed to ask for sizing help, he chose items that said One Size Fits All. A slinky satin kimono in leopard print, black fishnet stockings (remembering Bryce’s request) with a matching lace garter belt, stretchy thongs featuring mixed laces in front and minimal back coverage in Beach Orchid, a shade of pink Seth had never heard of. He fell in love with the varsity thongs because they were sporty (and seemed more unisex), and he ended up with two pair, one in electric pink and another in sea green. One more shorty kimono in a reddish pink shade called Love, and he was done. When they rang up his small pile and gave him the total, he almost passed out. Thank goodness Bryce had offered to pay, or he would have returned the lot.

His stomach began rumbling as soon as they handed him the shopping bag, and after glancing at his watch, he realized he’d spent over two hours at the store and had missed lunch. The Cheesecake Factory was a few blocks down, so he stopped and placed a takeout order for lettuce wraps for Bryce and him and a large slice of caramel cheesecake they could share after they finished pawing through the underwear. Seth felt a thrill of excitement imagining the scene, and his cock seemed completely on board with the visions in his head.

While he was waiting for the food, he texted Bryce to let him know he’d accomplished his mission and couldn’t wait to show him his purchases. Bryce’s reply was disappointingly short. A smiley face emoji and nothing else. Seth frowned and wondered if anything new had transpired with Owen. Was he upset about the delay? Did he make any more threats? He was still worrying about Bryce when he received their takeout and, loaded down with two heavy shopping bags, made his way back to the apartment.

Win a $20 Dreamspinner Press gift certificate or an ecopy of Open Seating by Mickie B. Ashling. Two winners! Contest open internationally. Must be 18 or older to enter.

Nov. 10 – On Top Down Under Book Reviews

Thank you to Mickie B Ashling for dropping by with an exclusive excerpt. Always lovely to have her on 🙂

Thank you Kazza and Cindi for hosting me again!

Thank you for the excerpt and giveaway!

I enjoyed the excerpt and I’m really curious to see what happens next!

Victoria’s Secret can be overwhelming and expensive. I hope Seth & Bryce get to enjoy the purchases!

Thank you for another exclusive excerpt 🙂

Thank you for the exclusive excerpt! I’m looking forward to giving this a read.

Thanks so much for sharing this book so much

I enjoyed the excerpt, thank you for sharing.

Thank you for the excerpt, Mickie.
And also for a chance at the giveaway. 🙂

Yowza, would love to see a guy in that outfit!

Thanks for the excerpt, the series sounds great!

Thanks for the excerpt and chance. I can see how Seth would lose track of time in there.

Wows! Electric pink and sea green thongs. I ‘d like to see them on! Thanks for the excerpt. 🙂

Don’t do one size fits all it never works Seth. lol. Great excerpt.

Sounds like some icebergs in the way of the guy’s happiness and I can’t wait to find out more. Thanks! 😀