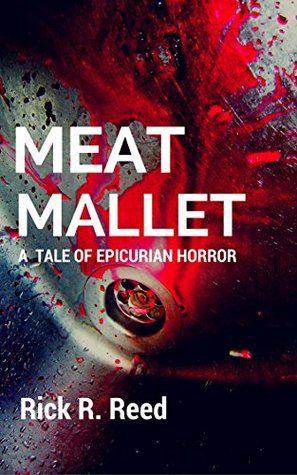 Steven’s cruising the Chicago lakefront park when he meets the man in the Jeep. He seems nice. He seems sexy. He seems like the kind of guy Steven could have a very good time with. When the guy invites him to his place, Steven doesn’t hesitate to accept.

But when Steven gets back to the guy’s apartment, he realizes, too late, there’s more on the menu than just sex. Steven has fallen into the hands of a very hungry predator…and he may never escape.

Those who follow my reviews here and on Goodreads know I’m a huge Rick R. Reed fan and that I discovered his work originally as a result of his horror. I’ve had to take a step back from pretty much everything lately but when I saw Rick had a new horror short out, I knew I’d be all over it. I wasn’t disappointed.

The story starts out with the main character (who isn’t named) in his kitchen tenderizing meat. As the MC says in the story – oh Lord, keep your mind out of the gutter, people! – he’s beating his meat.

I know, I snorted too, especially when he kept saying it. 😉 I actually giggled like a school girl, even knowing the story was horror and might even gross me out a little before it was over. 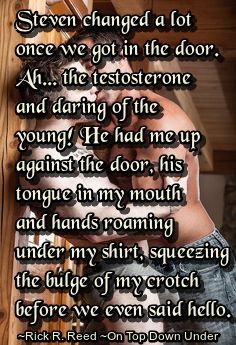 The chapters alternate between the main character in his kitchen and him meeting a man named Steven at a local park known for gay hookups. He’s pretty sure that maybe Steven could be the one. There have been many men in and out of his bed, but sadly, none wanted to stay longer than the sex. All he wants is someone to be with him always and to never leave him. Poor Steven doesn’t know what he’s getting into when he allows the man to take him back to his apartment.

And…. I can’t say more than that. I know, right? I finally come back after disappearing for weeks and then cut off my review when it’s starting to get good. Well, in my defense the story is only 19 pages and anything I say beyond what’s above will give the story away. Because I hate when people do that with books I haven’t read, I’ll be a good girl and stop here.

This, as always, is a great read by Rick R. Reed. I love the little bit of humor in the beginning, though the humor flies out the window pretty quick shortly thereafter. Not many authors can cover so much in only a few pages but he never fails to do just that in every short story of his I read.

If you like horror and want something quick, I highly recommend this. If you’re already a fan of the author, I have no doubt you’ll enjoy it as much as I did.

I love the cover. Really look at it again after you read the book.

Nice review without giving a thing away.

Good to have you back.

Thanks! My mind was totally in the gutter. You know, cuz he kept beating his meat and all. 😉

This is a really good horror short.

It’s nice to be back. Hopefully I’ll be completely back on track soon. That’s the plan.

I’m not a fan of short stories BUT Cindi, you’ve turned me into a Rick.R.Reed fan and this looks and sounds just as you’ve described it. How can you fit so much into 19 pages, well I wouldn’t have given it a second thought until I read your excellent review.

Thank you so much, Paul. It was actually one of Rick’s short stories that turned me on to his work way back when. Not many authors can cover so much in only a few pages. He never fails to deliver, whether it’s a short story or a novel. I hope if you read this you’ll let me know what you think.

What meat are they tenderising? I’m closing my legs thinking something bad. >.<

Bahaha, Jay! I can’t answer the question on what the guy is tenderizing. It would be too telling. But you just made me giggle out loud.