Once again, I’d like to thank Cindi and Kazza for giving me an opportunity to appear on their fabulous blog to share an exclusive excerpt of my latest release, Mayon. This historical novel was originally published by Dreamspinner Press in 2012. In this second edition, published under the imprint of DSP Publications, you can expect some additional content in the form of a prologue as well as a thorough reedit. The year is 1946 and the setting is the Philippines, a country I called my home for thirty years. Catt Ford created the beautiful new cover. Kudos to J for the consistent good work in organizing all my blog tours.

After being discharged from the Marines, John Buchanan is offered a position as overseer for plantation owner Ignacio Saenz. The offer is unexpected, considering he knows nothing about coconut farming, but the presence of Mount Mayon, an active volcano within sight of the property, tips the scales in Ignacio’s favor. Finally John has a chance to put his lifelong passion for vulcanology into practice.

Gregorio Delgado, the current overseer, takes exception to this turn of events. He views John as an interloper and Ignacio’s offer as a thinly disguised excuse to marry off one of his six daughters. What neither of them expects is the powerful physical attraction that simmers between them. Could John be a kindred spirit, or is he just using Gregorio for his knowledge of farming to ingratiate himself with his potential father-in-law?

As John and Gregorio begin a tour of the haciendas, John discovers he has far more in common with his new acquaintance than he thought possible. Torn between honor and desire, John struggles to define who he is and what Gregorio could mean to him. Like the unpredictable volcano, equal parts beauty and danger, Gregorio becomes an obsession that could erupt at any minute and destroy them both. 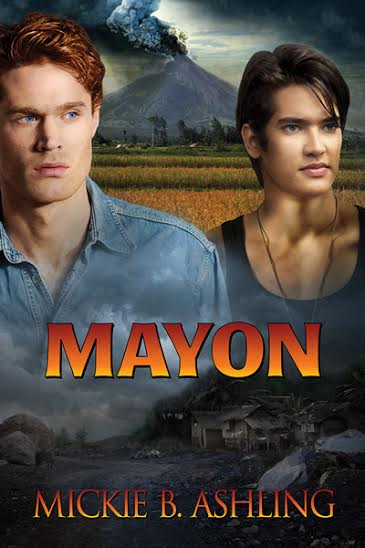 He was unself-conscious about his nudity and hadn’t bothered to pull on his shorts. Comparisons to the Garden of Eden arose in John’s mind once more as he fixated on the perfectly defined muscles on Greg’s torso.

“Christ, I can’t seem to get enough of you,” he said, yanking Greg back into his embrace. “Screw dinner.”

“Stop,” Greg said with a laugh, pushing John off. “We’ll starve at this rate.”

John let go and began to dig around in his haversack, standard military equipment for all branches of the armed forces. The Marines had their own version in drab olive green, a versatile two-part bag called M-1941. The upper portion was used to carry rations and extra clothing while the lower half stored extra shoes and utilities. The exterior of the bag had loops to carry essentials such as shovels, bayonets, and first-aid kits. John had cleaned out most of the old supplies but had left a few things, and he was pretty certain that matches were somewhere in the bottom of the well- worn bag. Letting out a triumphant whoop, he held up a perfectly dry book of matches.

“Why didn’t you say you had this last night?” Greg said reprovingly. “We could have built a fire instead of shivering in the dark.”

“If I had, there would have been no need to warm you up,” John said pointedly.

“That’s true,” Greg admitted. “It all worked out.”

“I seem to forget I have a brain when I’m around you.” John grinned. “You’re worse than alcohol.”

Greg took the matches from John’s proffered hand and smiled, looking pleased by the remark. After gathering twigs and dry leaves, he started a small fire. “Do you have a knife in that bag as well?”

John watched as Greg expertly scaled and gutted the fish. He then ran a sharp stick through the body before holding it over the emerging fire. Within minutes, the delicious aroma of roasted fish tantalized his senses, opening the floodgates of his hunger. Greg passed the stick to John and went in search of something they could use to lay the banak on. He came back with a banana leaf he’d pulled off a nearby tree and a bunch of ripe fruit to accompany their makeshift meal. The large green leaf sparkled with water after Greg had swished it around in the stream before using it as a tray. John watched in fascination as Greg thoughtfully divided the fish between them.

It was the most delicious thing John had tasted in a long time. “This is great,” he sighed, practically inhaling the food.

“I love fish,” Greg noted. “There’s nothing better than a freshly caught banak.”

“You’re handier than a Swiss Army Knife,” John commented. “Who taught you all of this?”

“My grandfather was an avid fisherman.”

“Was it hard growing up without a father?”

“It was hard growing up tisoy; I never really fit in.”

“You said that earlier, but you never expanded on it. Can you explain what you mean?”

“You know that Spain colonized this country over three hundred years ago.”

“I know, but then the Americans took over, didn’t they?”

“I thought we were loved by most of your countrymen.”

“What’s not to love? You gave us chewing gum and Hershey bars, but in those days especially we wanted to be independent. After a hard-fought victory with the Spaniards, we were arbitrarily awarded to the US in the Treaty of Paris at the conclusion of the Spanish-American War in 1898. No one bothered to ask us if we were okay with the deal. We went from one white ruler to another, and patriotic Filipinos were enraged. Conversely, a large part of our society deifies the Caucasian.”

“Well, your country is on the brink of getting its wish; the ugly Americans will soon be gone.”

“Not all of them?” Greg asked with a hopeful lilt to his voice.

John grinned. “Where do you fall on this interesting spectrum of love and hate?”

“Obviously, I don’t hate you, but the rest of it is complicated.”

“Around here, when a child is born, the first question out of anyone’s mouth is whether the baby has light skin.”

Greg shrugged. “My mother always implied that I was a little better than my peers for having Spanish blood in my veins, while my grandfather, who was pure Filipino, made derogatory remarks about the whites without realizing he was hurting my feelings.”

“So you set out to prove that you were more Filipino than anyone around you by acting the part of a true native.”

“How do you fit in with the Saenz family? You seem very comfortable around them.”

“I told you my grandfather was Don Ignacio’s lawyer and I would accompany him whenever they had business meetings. While he and Ignacio locked themselves in the study, I played with the girls. They’re like sisters to me.”

“I can tell. Were you over there a lot?”

“Don Ignacio would ask me over all the time. I think he felt sorry for the poor fatherless boy and tried to step into that role.”

“He’s been very kind and has always encouraged me to reach higher. When my mother decided we should move to Manila so I could get a better education, he was very supportive. I think he gave her money to help with our expenses.”

“What would happen if you were to court one of his girls?”

“He’d act just like the tribal warriors who’d objected to Magayon’s suitor—shoot me dead and toss me in an unmarked grave.”

“You’re exaggerating, Greg. He likes you.”

“Not enough to have me in the family. Besides, it would feel a bit like incest. I grew up with these girls and can’t think of them in romantic terms. Ugh… the thought alone makes me sick. Furthermore, Doña Carmen would never allow one of her flowers to soil themselves with a native.”

“But you’re good enough to be their friend and companion.”

“That’s different. I told you, it’s a hypocritical society, although it is getting better. Mixed marriages are becoming more acceptable, and I’m sure that ten years from now, it won’t even raise eyebrows.”

“Huh… we’re not so tolerant back where I come from. Colored folk and whites do not marry, and the ones who do are ostracized.”

Three winners will win a DSP Publications gift certificate OR one of two e-copies of Mayon. Contest open internationally. Must be 18 or older to enter.

Feb. 25 – On Top Down Under Book Reviews

Congratulations on the release and thank you for the excerpt. I am sometimes hesitant to read stories set in the last century. It can make me feel anxious, but I have to remind myself it doesn’t mean they are destined to heartbreak and loneliness anymore.

Congrats on the re-release of Mayon, the cover is nice 🙂 and i enjoyed the excerpt.

Thanks for another great excerpt! The discussion about race was interesting.

Love the excerpt! Thanks for the giveaway!

I enjoyed the post it was great to see John and Greg getting together. It was also interesting to get some more of the history of The Philippines.

Congratulations on the new release! It sounds really interesting. I loved the excerpt and can’t wait to read more. Thank you!

Great excerpt! Thank you for sharing it with us. Congratulations on the new book!

That’s a really beautiful cover. And the book sounds great. Thank you for the giveaway!

Congrats on the re-release! Thank you for the interesting excerpt and giveaway chance!

Thank you to Mickie B Ashling for joining us at On Top Down Under Book Reviews with Mayon.

That cover is striking.

Thank you for the interesting excerpt! Love the cover.

Congrats on the re-release and thanks for sharing!

Great blurb and excerpt. added to my to read list