Under a Sky of Ash, Brandon Witt 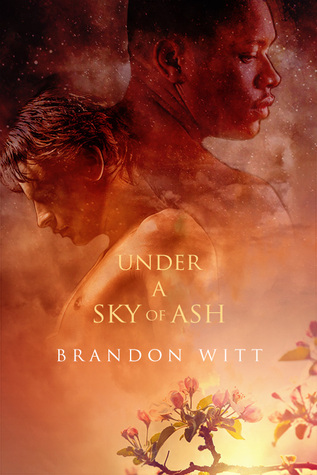 More than a decade after leaving Colorado to attend college and escape his past, Isaiah Greene moves back and builds a life in Denver as a special education teacher. When he meets Ben Woods, the mentor of one of his students, the attraction is immediate. The revelations that they’ve both suffered traumatic childhoods form a bond between them.

Raised by an abusive grandmother, Ben is a recovering addict who has made a family with his construction worker boss, Hershel, and Hershel’s husband, Daniel—drag queen ManDonna. Adding Isaiah to his life gives Ben a glimpse of a future he’d never dreamed possible for himself.

Both Isaiah and Ben are survivors, but when guilt drives a wedge between them, the past threatens to end their relationship.

Ben and Isaiah embark on journeys of self-discovery. Though their path will be difficult at times, humor and love find a way to bring light to the darkness.

He did know what it meant, however. He was about to have his first kiss. From a boy.
And not just any boy. RJ Martin. A year older. Already shaving.

Under a Sky of Ash starts fairly intensely with twelve year old Isaiah Greene having just experienced his first kiss from, cute, blonde, blue-eyed RJ Martin. It was supposed to be  sweet, something he wanted, something he should always have remembered with a smile. It was Halloween, his first contact with a boy he liked, but it soon turned ugly when RJ’s father came home and started beating him savagely. Isaiah did what any frightened twelve year old would do under the circumstances, he ran.

Fast forward twenty years later and Isaiah Greene teaches, is a special ed teacher, at a school in Denver, Colorado. His best friend, Charity, also teaches at the school and they 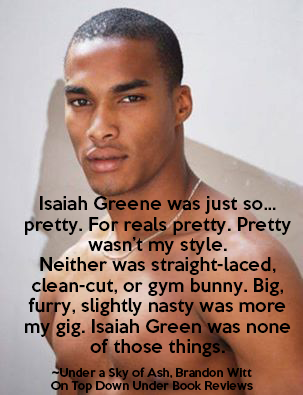 share a house together. Isaiah is a black, gay man who is haunted by his past and isn’t out.   It’s not that he’s closeted as much as extremely cautious; he doesn’t want people thinking what they will about a gay man around their children. A black gay man around their children. He isn’t looking for love. He isn’t looking for much of anything. He’s still running scared twenty years after RJ.  However, as is often the case, fate has a way of placing someone in front of you when you’re disinclined to want to take the bait. When one of Isaiah’s more challenging kids, Aaron, has a mentor in the Big Brother scheme who advocates hard for the boy, and that mentor, Ben, is somewhat intriguing, it means a connection. Whether either man wants one or not.

Ben Woods works in construction. The guy who owns the company, Hershel, is a good guy. He hires more than a few people, like Ben, who attend alcoholics or narcotics anonymous. But Hershel is more than a good guy, he and his partner, Daniel, aka ManDonna, are the 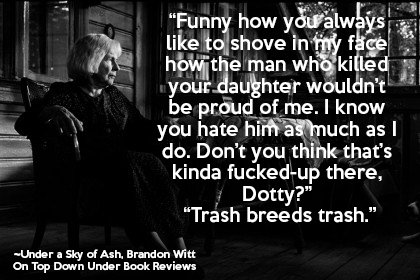 family Ben never had growing up. Ben has his own issues, including his horrid grandmother, Dotty Woods. The last thing he wants is anything more than a quick pickup. But once he meets Isaiah he’s thinking more and more about him – he’s fair with Aaron, professional at his job, and it doesn’t hurt that he’s hot. Too hot for Ben. Ben isn’t interested in model good looks and seeming perfection. He’s lived a hard life, a life of drugs, alcohol and hook-ups, it won’t be something Aaron’s pristine teacher would find attractive.  What Ben doesn’t know is he is very much Isiah’s physical type – blonde, blue eyes, and a sexy, grungy male.

Hershel and Daniel are getting married and, apart from the prospect of having a great day, it adds an opportunity for Ben to maybe see more of Isaiah. A Facebook friend request from Ben means much more than online friends, Isaiah finds himself invited to the nuptials… after hopeful prompting from Ben to Hershel and Daniel. The wedding is all rather fabulous! and Ben is hot in heels, bare chest, dancing down the aisle as one of the official wedding party – ManDonna is Ben’s “momma” after all.

There is a nice amount of sass, humour, camp fun and caring in this book courtesy of 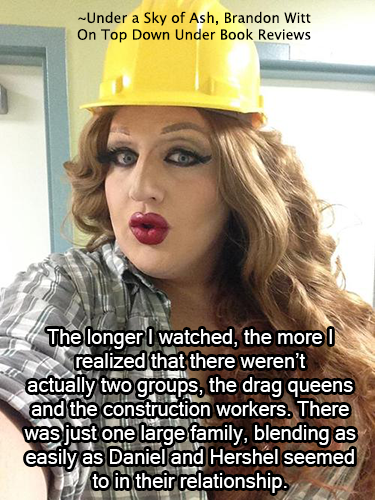 ManDonna and her hubby, Hershel. They are tough when they need to be but they are family, and anyone who loves a bit of Momma Ru will appreciate the times they’re in the book and some of the references.

I didn’t wait when I heard the line connect. “Hey, Daniel. It’s me. I’ve got a favor.”
“It’s not Daniel, dahling.” The voice on the other end of the line was all sultry camp.
“ManDonna? It’s the middle of the afternoon. And you don’t even have a show tonight.”
“Just trying some new eyeliners, lamb. I’m considering changing sponsors.”

Meanwhile, one thing leads to another between Isaiah and Ben and the two relationship-shy MCs find themselves falling hard. But love’s path is not an easy one and sometimes it seems like love is not enough. To add to the situation, Ben finds himself doing more than mentoring Aaron, including Aaron having to live with him, which is not easy when your  boyfriend is the boy’s teacher. It adds another layer of complication and pressure.

Under a Sky of Ash is told from alternating POV. Ben is very upfront about his past before jumping into the relationship, while Isaiah cautiously gives some information about himself. There are other details that aren’t brought to light, not because anyone is dishonest but

because their paths take a tricky turn. Being inside each MC’s head allows the reader to be aware, but each MC is not always certain because of their own issues. It was an excellent way to understand some of their motivations and create sympathy when you may have otherwise felt frustrated or ambivalent. More so given communication turns complex as the past morphs into a barrier between two men who have fallen in love.

I’m not going to say anymore about plot because I don’t want to spoil certain aspects of the book. I do honestly believe the emotion will be lost in (review) translation.

The characters were all interesting. You’ll either love them or hate them, some are far from nice – you know that expression, ‘I wouldn’t piss on you if you were on fire?’ Yes, well, it fits two people in this book. And whilst I truly loved Isaiah and Ben, they’re a wonderful pairing, that doesn’t mean I also didn’t want to knock their heads together sometimes and tell them that therapy does, in fact, work, and to get ‘your arses’ there, tout suite!

So, a bit of a reader checklist. If you like the following then this book should work for you –

An undertone of sadness with sad backstories 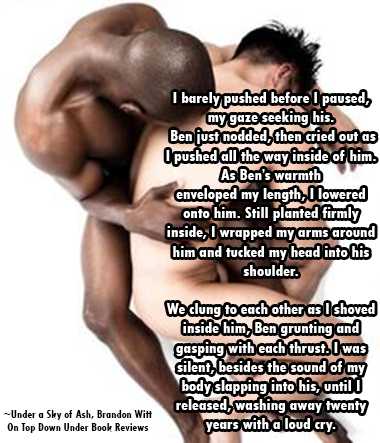 Some campness – primarily courtesy of a sassy and sure drag queen. Nothing like a camp yet fierce queen, and ManDonna, aka Daniel, delivered when on page.

That family often is who and what you make it.

There is initial attraction and pull, but the story isn’t insta-love. Their relationship develops over many months.

More plot than sex, which in all fairness suited the storyline, but sex is still there – sad sex, a moment of weakness sex, and love making included. (There is a Tumblr image I’ve added if you’re wanting some zing. 18+ and hugely #NSFW)

Flashbacks also form part of the story, I’m not always a fan, but it worked well in Under a Sky of Ash and flowed well into current day.

A well deserved and fought for HEA.

On top of this, there are two secondary characters who grabbed me and made me care for them more than I might ordinarily. RJ Martin is one, talk about tug at the heartstrings. Then there’s Aaron. Aaron is a the 6th grader who Ben mentors as part of the Big Brother

program. He is awesome, age appropriate, funny, as in an ‘oh crap, he didn’t’ way – he has special needs and he often, and quite accurately, has no filter or impulse control. Never does Aaron detract from the main relationship, rather he fits perfectly within the framework of the story. You can’t help but really like him. Generally I don’t like children in my romance reading but Aaron was wonderful and got under my skin in the best possible way. Isaiah and Ben have enough issues for everyone else so Aaron adds a bit of openness and honesty in his own unique way.

No two ways about it, Brandon Witt’s strongest suit as an author lies within his 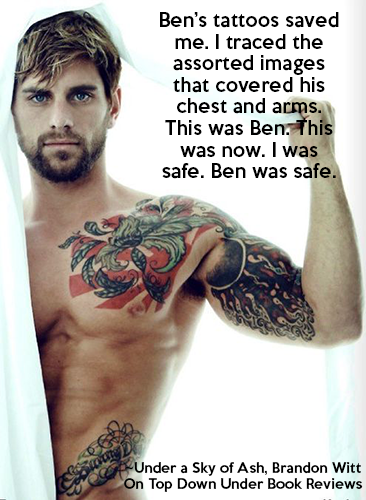 characterisations. This applies equally to those you love or loathe, and, yet again, there are some strong, memorable characters in this book. In both camps. He also writes more passionately about what he knows well and that is to the fore in Under a Sky of Ash – humour, special ed teaching – both from a teacher’s and child’s standpoint – dealing with parents/foster carers, religious roots clashing with homosexuality, and friends as family. Plus, it’s all within a Denver setting. Most importantly, I loved Isaiah and Ben. They had chemistry and they had critical emotional intersections that drove the angst and plot well. I was engrossed in the story, read it quickly, and, as I’ve already mentioned, the secondary characters were excellent. Under a Sky of Ash provided me with a roller coaster ride of emotions and, for me, that’s what good writing and reading is all about. 5 Stars!

Omg that was awesome! Cant wait to read this. Wow

Thanks, Janie. It’s an awesome book and I really hope you have a ride of emotions of your own while you read it 🙂 🙂

This looks like a fantastic book. It has a lot of things I look for in what I read. You know I love kids in books so I know I’d adore Aaron.

Great review. I love the photos, GIFs, and quotes.

Yes, you love children in your books, Aaron was fantastic. I know you’d enjoy this book so if you ever get the chance, grab a copy.

Thanks, Cindi. You know it’s not always easy writing a review when you can’t throw it all out there. I have to admit the GIFS and the pics took a while to get right for this one, glad you liked them 🙂

This was a really great review and avid reader I have read many. It draws you into wanting to get the story yet not giving so much away as the review gives details. Very nice,

Thank you, Marle. It’s good to be able to get a feel for a book without too much about it. I hope it makes you want to read Under a Sky of Ash as it really is a good book 🙂

Most excellent review KK. When it’s out i’mma getting it. That tumblr is damn sweet! 😉

Thanks, Jay. I do know that you do like some “sweet” Tumblr, lol. Buy the book, it’s good 🙂

This book was under my radar but you sold me. 🙂

I’m so glad, Matt. I really hope you enjoy it 🙂