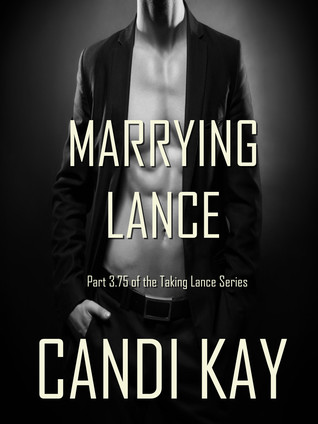 Tags: Marriage Series Founding Couple, For Readers of the Series

Purchase At: **As at June 13th, 2017 the author is in the process of making this free on Amazon but it takes some time and wrangling. Wait for the price to hit $0.00 before grabbing your copy. Maybe go to the author’s website.  amazon.com

Rick Preston and Lance Scott are finally ready to make their relationship official. With only their closest friends in attendance, they’ll be saying their wedding vows in an intimate ceremony. When Lance insists on going traditional, Rick reluctantly agrees to not see him in the twenty-four hours leading up to the wedding. Only a few hours in, Lance is already regretting that decision. With Lance’s nerves getting the best of him, and Rick’s determination to see his man, traditional quickly goes out the window.

Marrying Lance is Part 3.75 of the Taking Lance series. The wedding will also take place in the finale of the series, Finding Alex, but told in another character’s point of view. Marrying Lance is a thank you to every reader who has followed along with Rick and Lance and are eager to see them finally get their true happily-ever-after – in their own words.

This is a sentimental book for me because I’ve been on board since this series first came out. I have a weakness for Rick and Lance, and even though Rick can be a butthead sometimes, he’s a favourite butthead of mine. This series has been a not-so-guilty pleasure of mine with some erotic and interesting escapism. In between my darker reading this is more fluffy, albeit some rather naughty fluff. The series also has its more dramatic moments too. It’s run the gamut of sexual combos throughout – bi, gay, het sex, and there have been ménages and people playing the field. And romance. Several people found their partner along the journey of the series, including Rick Preston and Lance Scott, the founding couple.

So, Rick and Lance are making it official this time, they’re tying the knot. I’m very happy to see them get their HEA because they’ve been through a few, uh,  trials and tribulations to get to where they have. If you survive Karen and Aaron – Being Karen –  you deserve a huge happy ending. Big.

Lance is toey and pacing, their friends can’t decide if downers or tequila, or both, will calm him down, for all their sakes. Rick isn’t in love with their traditional wedding time apart, and Lance plays dirty with some pre-wedding naughtiness with Rick.

People from other books make appearances, like Mandy, it was nice to see her on their big day and she has a surprise. There’s Travis and Mark, and Alex and Dean are there too – they’re loaning Rick and Lance the use of a stately house for their stay and the nuptials. It’s good to see the friendships they’ve all formed and their mutual love of sex – these guys like to get it on. So, you know, there are some sexy times.

There are some lovely and meaningful vows, and it makes me think how I would love Australia to become civilised regarding Marriage Equality. It also made me happy to see the guys get a little emotional because they truly love one another and they’re happy. 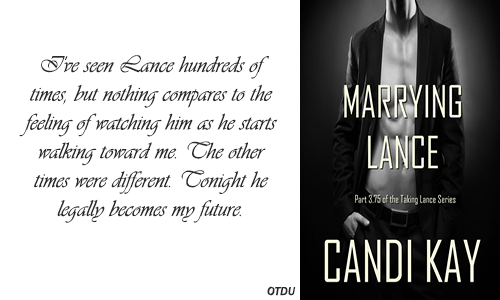 At the end of the day, this is only 37 pages so I can’t write much of a review. The series does run the gamut of partners, like I said, but Rick and Lance are at the core. As for this novella, this is for the people who have enjoyed the series. Read on its own, Marrying Lance won’t do a thing for a reader who hasn’t read the series books the MCs are previously in. You won’t know the guys and there won’t be an emotional connection. I got a little teary at the vows because I feel like I know these guys. I’ve wanted Rick and Lance to ride off into the sunset, happy in each other’s arms – and I got that. Bye, Rick and Lance. I’ve loved being with you. In an increasingly crazy world… love long and love hard. Kazza xoxo

First off, I’m loving the guy on the cover. Hello! 😉 I know how much you love these guys. Great review. I really love the rainbow heart.

Thank you so much, Kazza. You used one of my favorite quotes from the book – when Lance is walking to Rick. I love your review and I can’t say enough how much I appreciate you and your support almost from day one.

I wrote the wedding vows and I still get choked up every time I read them. 🙂 These guys were my firsts. I’ll be sad to say goodbye to them when I end the series.

You gave them the ultimate HEA, a wedding. It made me think about the books I have read and I couldn’t recall many weddings – actually I couldn’t think of any, although I’ve probably read some at some stage. Anyway, it was nice to read. Having been there from the beginning made it a special book for me.

It is a lovely quote, and you’re welcome 🙂