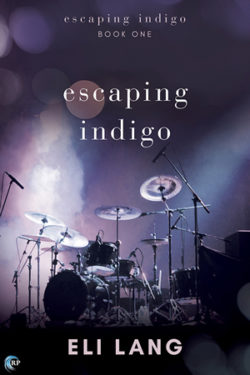 I’m not big on books about rock bands or musos as a rule. However, I really thought Half by Eli Lang was beautiful so I wanted to read Escaping Indigo to see what the author would do next. If you like rock star and band books for all the reasons I don’t like them – the egos, an often alpha celebrity, the razzle dazzle, then maybe this one won’t be for you so much as it was for me. I am fairly sure I called Half a gentle book, maybe a quiet book, the same can be said for Escaping Indigo. It’s a mostly reflective and introspective storyline with a band that doesn’t party or carry on. It’s a more character driven story with a general love of music as its platform.

Micah has been a roadie for Escaping Indigo for a matter of weeks. They’re on a bus touring to different cities within America. He used to be the drummer in a band with his best friend, a guy he loved as a brother, Eric, and Eric OD’ed not so long ago. When he’s not on the road Micah still lives in the flat above Eric and Quinn’s mum’s garage. A lot of dreams died for Micah along with Eric, and one of those dreams was drumming in a band with the closest person in his life beside him. So when Quinn, Eric’s brother, offers Micah the roadie job with a band he idolises, he accepts.

Escaping Indigo is a smaller venue main band and a larger venue support group. They haven’t quite hit the heights yet, they play to hundreds of people at a gig and they play some bigger concerts behind major names, but they’re just a rung below the big time. They know famous musos, they have a tour bus, where a lot of this book is spent, and they have some tour personnel. Over the course of their latest tour Micah and Bellamy grow very close. Micah has held a fan-based and muso-to-muso torch for Bellamy for some time. He loves Escaping Indigo’s music, Bellamy’s voice, his presence on stage, and like more than a few fans have felt over the years, it’s like Bellamy’s singing only to Micah. Once they meet on tour it morphs from fan or muso crush into much more.

Escaping Indigo’s front man, Bellamy, is charismatic, with a smile that makes everyone feel like a friend, but behind the scenes Bellamy can run a bit warm and cool. Micah and Bellamy initially start connecting over quiet-time cigarette breaks, and it branches out to more, but there are times Bellamy shuts down and that worries Micah. Micah feels a deepening of feelings toward Bellamy. Is there something real between them, the roadie and the singer/ guitarist? Can he help Bellamy without putting him offside? The reality is that Bellamy’s apprehensive about going through the pain he experienced, is still experiencing, at the breakdown of a relationship. Will Micah be like his ex? His boyfriend liked Bellamy’s stage persona but not all of Bellamy, not warts-and-all Bellamy.

Even though Eric’s brother hired Micah, he wonders why Quinn did it. He never seemed interested in him before but he’s given Micah a lifeline in this job. It’s amazing how in difficult times a person can discover there is more to people seemingly on the periphery – Quinn lost his brother too when Eric died.

Both MCs have some issues they need to deal with and the book looks at young male’s reactions to anxiety, loss and grief, plus some co-existing depression. It isn’t intense and it isn’t pushed at the reader with great depth, it’s not meant to. Rather, it’s a twenty two year old and a twenty six year old trying to deal with their respective problems. Young men feeling like professional help or medication means you’re crazy, illogical, broken, or somehow wrong – which is a pretty typical reaction. Both guys have danced around their personal emotions, but as they grow closer and closer they give each other the impetus to do something about it, which can only be a positive thing.

“I don’t want to do it anymore. I want it to go away.”
I nodded. I didn’t know what to say. I didn’t want to say anything foolish and ruin this, because it was so important. “I might see someone too.” My voice was soft, because it made me nervous, and maybe I understood, just a little bit, what Bellamy was saying. “A grief counselor or something. Just . . . someone to talk to.”

There are glimpses of other band members, nothing in great detail, all of whom support one another without getting in each other’s faces. The next book in the series will feature Ava, Escaping Indigo’s drummer. The fact that both Ava and Micah play drums helped with a touch of camaraderie.

The reason this book is 4 stars as opposed to 5 stars is mainly because of two things. The amount of ellipses drove me around the twist. I understand that these guys are apprehensive when they voice concerns out loud, but it was too much. There were times I wanted to finish a sentence or I wanted to hurry it along. I’m a bit torn on this next point because when you are feeling grief and the depression that goes hand-in-hand with some of it, you tend to look down on yourself: But Micah thinking of himself as less-than at times – ‘I’m only the roadie, Bellamy could have anyone’ – made me want to sit him down and talk to him about his self-worth one too many times. However, Eli Lang’s overall writing has a way of drawing me in and making me connect and fall just a little for her characters. It happened in the beautiful fantasy Half and it happens again, this time with the visceral contemporary Escaping Indigo. 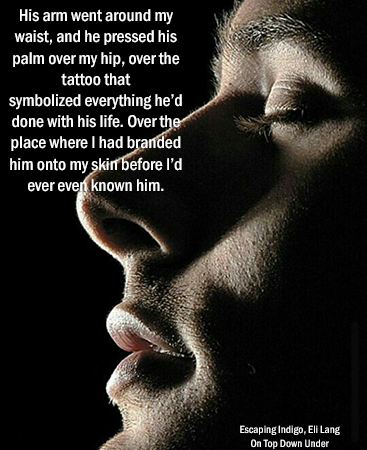 Eli Lang has a poetic voice. A melancholy and lyrical style permeates her narrative and writing, making her writing  quite lovely. She writes endearing characters, nothing alpha or chest-beating about them. Micah is sweet, which is good as he’s the primary POV throughout. According to Micah, Bellamy is glittery on stage and larger than life. Off stage, however, he’s an unsure creative type who wonders how he’s made it to where he has, getting to do the thing he loves most – music. Who also worries about messing that up. That, the reader is privy to more than the rock star persona. Neither character is complicated or profound, yet they reach realisations. Nothing in the story is too heavy, there is no great action or drama just a bubbling below the surface of some emotions and fear, the solace and connection two young men find in one another. The love of music is important but it’s the backdrop to Micah and Bellamy’s relationship and the issues that make them unsure. Once again there is a quirky style to the way Lang approaches storytelling and her MCs, a beauty to them, and I really do like it. 4 Stars!

This looks really good. I believe I’d also be a little iffy about Micah’s insecurities but he seems like such a sweet character. I love the visuals and the quotes. Great review, as always.

Micah’s insecurities were frustrating at times, even if I understood them. He is, however, a very sweet character and the book is so charming.