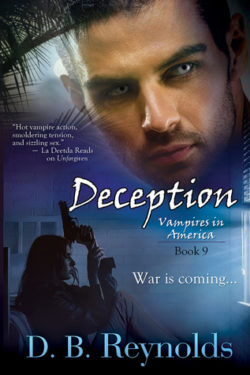 Kauai, Hawaii—tropical paradise, vibrant jungle, turquoise sea . . . and sensuous nights that hide vampires so powerful they can change the world.

Raphael—powerful, extraordinary, arrogant. He’s been eliminating rivals and gathering allies, determined not just to survive, but to demolish the Europeans who think they can steal what he’s worked for centuries to create. In a final bid to avert a war that seems inevitable, Raphael agrees to meet an enemy he knows of old. She is formidable, wily, and not to be trusted. But in his arrogance, Raphael believes he can foil whatever treachery she has brewing.

Cynthia Leighton—Raphael’s human mate, beautiful, smart, and deadly when threatened. She doesn’t trust anyone, much less a powerful vampire claiming to want peace. So while Raphael prepares to negotiate a treaty, Cyn is preparing for the inevitable double-cross that she knows is coming. Raphael worries about saving thousands of vampire lives. She only cares about one, and she will do anything to keep him alive and in her arms.

When Cyn is proven right, when it all falls apart and Raphael’s enemies draw on ancient magic to trap him, taking him away from Cyn and out of the war, it all falls to her—to find Raphael, to save the thousands of vampires who will die if she doesn’t succeed . . . and to kill every single being, human or vampire, who gets in her way.

I remember when the Vampires in America series started, I would order each paperback every time they were due and wait about four-six weeks for them to arrive from America. I was totally hooked on Raphael and Cyn. Here I am about eight years later still reading this series, albeit on my Kindle and a bit more slowly now, but I love the series. Most of all I love the books about Raphael and Cyn – aka Fang Boy and My Cyn.

Deception is a full-length book instead of the vignettes or .5’s we get in between each new lord’s own story and it was fantastic. I hope there are more full-length Raphael and Cyn books coming. I thoroughly enjoy how these stories always tie-in the couple, the world, the individual vampires – the power-plays around them. But it is this particular couple, Raphael and Cyn, that D.B. Reynolds has an amazing affinity with. They never miss a beat, they are constant in the way they talk to each other and how they behave, the way they show their shared love for one another, their chemistry, their mate bond, and just how powerful they are – independently or together.

Raphael has spent a lot of time shoring up America, Canada, and Mexico as a cohesive unit, as opposed to the fragmented mess of lords who ruled each territory before his move, can you say Jabril. The ruling vampires are not a trusting lot, they wield and radiate immense power, they are territorial, and they’re brutal as needed. They also expect loyalty from those they take as one of theirs or as an ally. There are vampires who are young and those who haven’t much power or designs on leadership. There are vampire masters and then there are Vampire Lords who have ambition and a ruthlessness required to make tough, decisive decisions. Some of these have more power than others – it’s part politics, part being shrewd, part age, part time spent learning the ropes and knowing how and when to shield or use the power they have. Raphael has immense power but the European vampires haven’t had much to do with him since he left their shores in the 1800’s. While they know he is powerful, they underestimated him until an encounter in Mexico not so long ago. So they come to Kauai armed with a plethora of vampire masters all headed up by the very old Lady Mathilde.

“What she wants is to waltz into Malibu and issue a challenge to Raphael personally. And when he doesn’t respond to her challenge, because she’s made sure he can’t, she’ll declare herself the winner by forfeit.”

In Deception, Cyn has to live up to her skillset and her reputation as the mate of the Lord of the West when the European vamps have set their sights firmly on Raphael’s territory. When they make a cowardly grab at Raphael, kidnapping him using trickery, Cyn has to jump into action. This is nothing new to Cyn, she used to be cop and then a PI. She knows weaponry and she isn’t afraid to use an arsenal. She’s deeply loyal and she’s been with Raphael long enough to have a bloody side as well. Vampire society has a lot of rules in place that compromise what Raphael’s offspring and dedicated team can do. However, Cyn is human, a very resourceful and kickarse one, and she won’t put up with anyone laying their hands on Raphael, the love of her life, and that includes anyone using hypocritical vampire rules. As far as strong female characters go, Cynthia Leighton is amazing – she takes no prisoners, knows she isn’t as powerful as the vampires she finds herself surrounded by now, but she improvises and she does it very well.

Cyn shrugged. “You wanted to learn more about vampires? This is your first lesson. We survive by being paranoid.” She stood and gave him a flat stare across the table. “You’ll want to be careful, Detective Turner, that your second lesson isn’t what happens to people who betray us.”

As always with this series, the world-building is amazingly good, the power, the laws, the vampire symbiote, the euphoric, what affects these vampires, the different territories, the nuanced differences between vampires, how the hierarchy works, the warriors, their human daylight-hours staff. Everything regarding Raphael and Cyn ties into previous plots and character development. There is an overarching storyline in the general series about war between Europe and America and it’s allies. There is romance and chemistry, Raphael and Cyn have a palpable connection that is built on love, and the magic that is powerful vampire soul mates.

There’s always plenty of action in this series and Deception does not disappoint. Then there’s the requisite vampire blood and gore, humour, biting and sex – all you could want for the genre. This book is set between two places – Malibu and Kauai. A couple of new characters are introduced and series favourites – like Lucas and Duncan and Murphy, Sophia’s mate – have cameos or important roles, and a certain female bodyguard finds a lover – you go, Elke. Also, what the hell, Nick?

This is an excellent paranormal/UF romance book to add to the impressive Vampires in America series, and while I know it’s popular, I am always amazed that more readers haven’t jumped on the ViA bandwagon. This is as good an urban fantasy/paranormal romance series as you are ever likely to read. 5 Stars!

Every time I read one of your reviews I question why I haven’t already started reading the series myself. It seems to have it all – good het romance, a kick-ass female (so rare in books these days), a lot of action, and pretty much everything else I love in the books I read.

Another great review. You know you love a series when you’re still eager to read the next installment several books in.

This is such a good series and I’m enjoying playing catch-up. I know, the strong female lead is so important to you, just like it is to me, and Cynthia Leighton owns that. Raphael is a total force of nature as well. I am moving right along in my ViA books and have Christian, book #10, on my Kindle ready to go soon.

Thank you 🙂 I hope you do pick them up one day, Cindi.