Infatuation or Bust by Alp Mortal 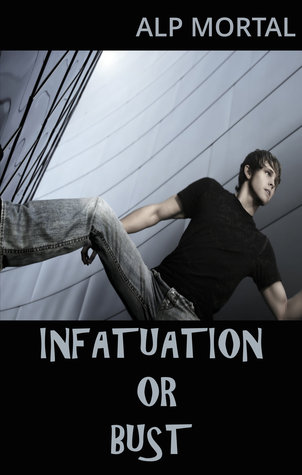 Max is infatuated with Roland; Roland is infatuated with his truck and his motorbike … and Max. Unfortunately, Max’s mother has her son’s glory on the tennis court and his career in the law courts on her mind. Time for a young man to fly the nest and live his life how he wants …

Max lives with his mum and plays tennis. A lot. Studies. Quite a bit. His mum wants him to go to Ipswich and study law, says his father wanted that. However, Max’s father died when he was six years old. His dad drove trucks, made a decent living, so it seems odd that was his dad’s dream. More like his mum’s. Max’s tennis partner is Mark and his father and Max’s mum are close. A lot of coincidences between them that also bind them, in a way, including their sons playing tennis together.

Roland and his wife of ten years, Judy, live across the road from Max and his mum. His mum notices Max’s eyes drift over to the nicely muscled Roland when he’s working on his bike. Maybe she knows, maybe she doesn’t know, that her son has the hots for Roland. She does try to distract him, but she’s fighting a losing battle. Besides, Mark’s dad is giving her a lot to think about – first dates, how can she let go of her dead husband’s memory without feeling guilt? Can she persuade her son to go to law at Ipswich?

Studying and tennis; both designed by Mothers who wish their sons to avoid hormones and neighbours called Roland.

Max and Roland start an affair, Max is turning seventeen – young, but past the age of consent in England – and Roland is thirty. This could have been tawdry but it never was. Judy knows her husband likes guys, doesn’t mean she isn’t sad about it, but she makes a decision to leave. However, before she goes she gives Max some advice he takes to heart. Advice about grabbing your dreams while you can. Something she and her husband have failed to do while staying together and living a lie because… well, it’s what adults often fall into the habit of.

Max is full of youthful enthusiasm about bikes, trucks, about the fact that Roland has both. He’s also interested in sex. Something Roland’s keen to teach him about. It’s not long before they are sexually active and it starts while Roland is married, so if that bothers you maybe bypass this novella. As I said before this could have been tawdry because it isn’t just the age difference but the ages that they’re at combined with the age difference. But Roland is caring, Max is very interested and from the outset there’s more than just sex between the two of them. 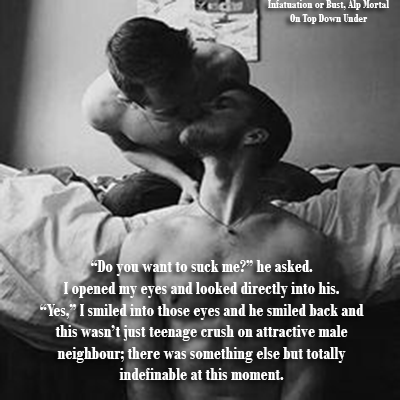 Max has some money come his way from his father’s estate and he’s been thinking and thinking about his future…  about what Judy said to him before she left. He doesn’t want to study law and he doesn’t want to be a tennis pro. What he wants is a relationship with Roland and for it to be recognised. He also wants to move away from England. When an opportunity arises, when dreams are discussed, will Roland be okay about what Max is thinking?

I like Alp Mortal’s books. I gel with the characters, and I’ve read a few of them now. There were interesting parallels between Max’s mum and Trevor, the man she has a growing relationship with, and Max and Roland’s mutual life-situations and interests that connect them, even the title pays homage to it in a way. Once again Alp Mortal has written a story of everyday people. Max and Roland do nothing spectacular. No one is a rock star or a billionaire. Nothing flash, angst-driven, or exciting happens in their lives; except taking a chance. It’s not as British as some of the others Alp writes, but it still is. I like a break from the usual settings and language. I like the ease of use of British slang here, and it makes a cultural difference when a book is written by someone who is naturally at ease with a backdrop and colloquialisms they know. Even the choice of fish and chips, and which piece of fish –  cod or haddock – made me smile.

Infatuation or Bust is not long but it does provide the reader with an epilogue set ten years down the track. I liked and needed to see what happened with this pair and I was grateful for it. Okay, a longer book would have filled in some of those years but when I’m in the right mood I really like a good short story –  and I sat down, opened up Infatuation or Bust and became involved. This is an easy reading, contemporary gay coming of age that I enjoyed from cover to cover. 4 Stars!

You know my love of books with characters who have a substantial age difference so I know I’d love this. I also love that the author added an epilogue. 17 is young so the reader would need to see them down the road. Great review. Love the visuals and quotes.

Yes. Exactly. The ages made it necessary for an epilogue and I appreciated that the author understood this. It was a nice package overall.