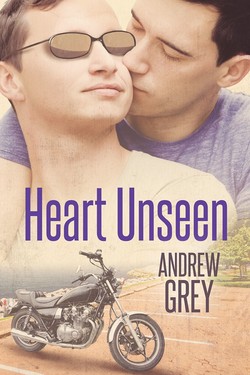 As a stunningly attractive man and the owner of a successful chain of auto repair garages, Trevor is used to attention, adoration, and getting what he wants. What he wants tends to be passionate, no-strings-attached flings with men he meets in clubs. He doesn’t expect anything different when he sets his sights on James. Imagine his surprise when the charm that normally brings men to their knees fails to impress. Trevor will need to drop the routine and connect with James on a meaningful level. He starts by offering to take James home instead of James riding home with his intoxicated friend.

For James, losing his sight at a young age meant limited opportunities for social interaction. Spending most of his time working at a school for the blind has left him unfamiliar with Trevor’s world, but James has fought hard for his independence, and he knows what he wants. Right now, that means stepping outside his comfort zone and into Trevor’s heart.

Trevor is also open to exploring real love and commitment for a change, but before he can be the man James needs him to be, he’ll have to deal with the pain of his past. 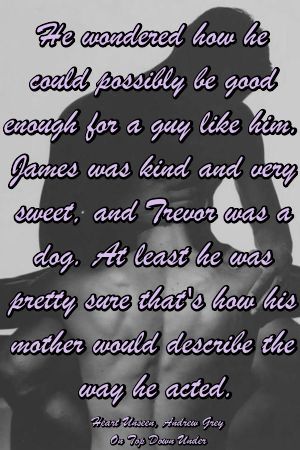 Trevor is a man-slut and doesn’t care who knows it. All he wants is hot, no-strings sex. He had a relationship once and has no desire to venture down that road again. More than a little vain, he knows he looks good with his jet black hair, leather jacket, and motorcycle. He’s a bad boy and not the least bit ashamed. He’s at a club with his friends when he sees a good looking guy sitting alone at a table across the room. Trevor, who has never had a problem getting pretty much any man he wants, walks over with the intention of charming the guy. Instead, he gets shot down. For the first time probably ever his looks and flirting don’t faze a man. Dejected, he walks back to his friends.

“I don’t get it. The guy is adorable, so I gave him my best smile. He looked through me like I didn’t exist. I mean, I’m not shallow or anything, but I know how I look, and usually guys are all over me to get a piece of this, but…”

.
“Trevor got shot down and he’s wondering if he turned ugly in the last five minutes,” Brent teased.

Trevor discovers the man, whose name is James, is blind. He walks back over and invites him to the table he’s sharing with his friends. Reluctantly, James agrees but only because the loser so-called friend he came to the club with pulled a disappearing act. Something happens and Trevor ends up taking James home. This begins their relationship, though Trevor doesn’t do relationships.

Trevor could do his norm and charm James into bed. Lonely for touch, James would be willing. Something holds Trevor back because he knows that James isn’t like the others he’s been with. This had me going from strongly disliking Trevor to starting to like him. Oh, he had his bonehead moments, but he was good to James and never treated him as less than because of his blindness.

Then there’s James. He’s strong and independent, though his mother treats him like a child. I despised his mother and that didn’t change as I continued to read. She’s snobby and very judgmental, the type of person I can’t stand in the real world.

Sometimes his mother was so stuck-up, James swore if it rained, she would drown.
.
~*~
.
“He looks like a gang member. Who wears leather to a country club? It looks like he rode here on a bike.”
. 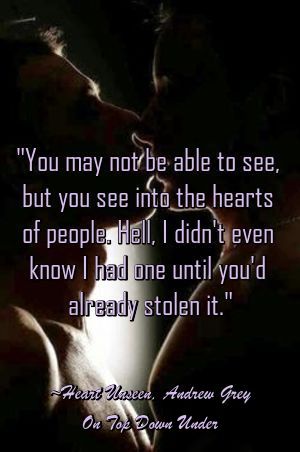 Needless to say, it’s a given that James’ mother isn’t a fan of Trevor. He’s a very successful businessman but James’ mother only sees the leather. I really did not like her.

Suddenly Trevor is wanting more. But something happened in his past that makes him terrified of opening up to James. James’ experience with men is nothing like Trevor’s, but he’s been hurt in the past too. They both have to find a way to get over what they went through in order to move forward together.

I absolutely adored watching Trevor come into his own with James. For the first time in a long time he was willing to open his heart to another man. No more slutting around or going out with his friends. He wanted to be with James and only James.
.
I love how the author wrote James’ character. He’s blind but he’s very independent. The only issue I had with him was his lack of self-confidence. I get it 100% but there were times it came across as whiny when he was with Trevor, not him being scared of moving forward with him because of his disability.
.
James opens up to Trevor about a relationship he had years before. Trevor holds back on saying too much about his. It takes awhile for him to finally reveal what’s held him back from love, but when he does, everything seems to fall into place for the two men.
.
There are other characters who make up the story. I think my favorite secondary character is Zackary, James’ four-year-old nephew. I adored this child. A sucker for kids in books anyway, I couldn’t not like Zack. His name is also spelled the way my son spells his. 🙂 I also loved Zack’s parents,  James’ sister and brother-in-law. I’ve already given my thoughts on James’ mother.
.
I loved Trevor’s dad.
.
His dad rolled his eyes. “You are a handsome man. I’ve seen you turn heads since you were twelve years old. But you’re dating a person who can’t see you at all. Your looks are lost on him. That’s so perfect.”
. 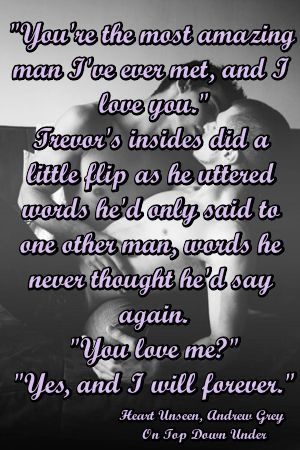 Then there are Trevor’s friends, Brent and Dean. Brent, I liked. Dean, not so much. I did like Dean in the beginning but then a curve ball was thrown with him that I wasn’t expecting. I’ll reserve judgment until his own story, which I really hope he gets. I hope Brent gets his as well.
.
Overall, this is a beautiful story. I loved watching Trevor as he walked away from his bad boy ways for James. Seeing James keep his independence at the same time he allowed himself to fall in love was also a pleasure. There was a little drama with one of Trevor’s employees but it didn’t bog the story down. If you’ve read the author’s Senses series you’ll love Heart Unseen. Love Comes Silently (Senses #1) is an all-time favorite of mine so I knew I’d be reading Heart Unseen. Highly recommended.
.
This book was provided by Dreamspinner Press in exchange for a fair and honest review.

This sounds like a nice, sweet contemporary romance, and a child too – such a Cindi book 🙂

I love that second pic and quote so much, it’s really lovely. Wonderful review, Cindi.

It’s definitely a Cindi book. The little boy is adorable. I love the second quote too. I knew as soon as I read it that it would be going in my review.