Change of Heart by Liv Rancourt 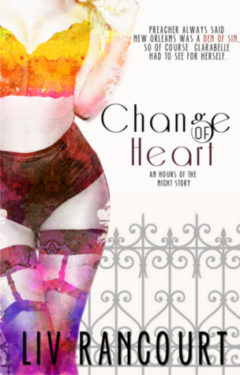 Preacher always said New Orleans was a den of sin, so of course Clarabelle had to see for herself…

Momma says a body reaps what they sow, and Clarabelle’s planted the seeds of trouble. The year is 1933, and not much else is growing in the Oklahoma dirt. Clarabelle’s gone and fallen in love with her best friend, so she figures it’s time to go out and see the world.

If she’s lucky, she’ll find the kind of girl who’ll kiss her back.

Clarabelle heads for New Orleans, and that’s where she meets Vaughn. Now, Vaughn’s as pretty as can be, but she’s hiding something. When she gets jumped by a pair of hoodlums, Clarabelle comes to her rescue and accidentally discovers her secret. She has to decide whether Vaughn is really the kind of girl for her, and though Clarabelle started out a dirt-farming Okie, Vaughn teaches her just what it means to be a lady.

Change of Heart is a distant prequel to the other Hours of the Night novels, and can be read as a stand-alone.

**TREAT THIS REVIEW AS A SPOILER.

Clarabelle leaves her Oklahoma town when the girl she fancies doesn’t fancy her back. Clara’s mum is cash-strapped so it’s best Clara finds her way somewhere she might fit in and make some money… and the gossip won’t be problematic.

I figured I had another week before the whole town had heard about my wayward nature. So I packed my change of clothes and begged Momma for a few dollars. She gave me some, but the year was 1933 and what little she had was dwindling. When I said goodbye, I think we both knew it might be the last time.

Clara isn’t sure where she’s going to go initially but some practical concepts whirl through her mind and decisions are made. There isn’t much for her in her home town but somewhere else just might offer her some work, and a degree of comfort and happiness – even if it comes wrapped up in a sinful title.

Home might have been a vacant corner where Oklahoma bumped into Texas, but I headed out to see what I could see. I didn’t have the money for the bus to California, and the winters in New York were too cold. But our preacher used to say New Orleans was worse than Sodom and Gomorrah, so with the application of common sense, good manners, and luck, I found my way to the place I was always meant to be.

So  New Orleans it is. Clara gets a job working as a hatcheck girl at The Moonlight, a local nightclub. Lorraine works with her and she’s brash and rude and does what she likes, and she likes ladies. Then there’s Vaughn with her long auburn hair, style and grace, and her light rose scent.

Vaughn, one of the cocktail girls, popped off the main floor. She was tall, with auburn hair and the prettiest collarbones I’d ever seen. When I thought about doing bad things, her lovely face often came to mind.

Vaughn and Clara become friends but through Clara’s eyes you know Vaughn’s drawn to Clara’s innocence and sweetness. The two

get closer still, but Clara doesn’t dream the sophisticated and beautiful Vaughn would reciprocate her feelings.

Clara lives cheaply but neatly in a boarding house and sends money home to her mother. While Clara does think about her momma, the preacher, and her landlady’s sensibilities, she knows what she likes and she can’t change that fact.

I’d promised not to do anything wrong, but I’d never admit to Mrs. Noschese that there might be some bad things I wanted done to me.

Vaughn is picked up most nights by a car, pretty swish. Mr Dupont and his partner, Leo, come into play here because Vaughn is a friend of theirs. Thaddeus Dupont is well known to this reader from Vespers and Bonfire and Leo was part of Thaddeus’ past, and in Vespers he plays a minor but important part. Mostly for me it was nice to briefly touch base with a character I already love, the caring Thaddeus. It gave me Thaddeus and Sara cravings. But I digress.

One night while coming home, after an earlier kiss and connection between Clara and Vaughn, Vaughn is confronted 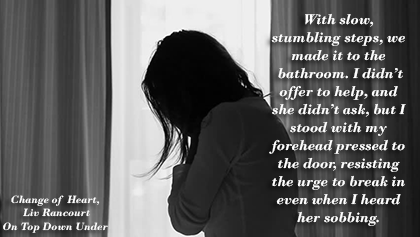 and attacked brutally by two men. Clara doesn’t know what’s going on, other than Vaughn is badly beaten and slashed with a knife. Vaughn doesn’t want to see a doctor or go anywhere but back to Thaddeus Dupont’s house where she lives. While Clara is initially taking care of Vaughn there is shock at discovering different anatomy to Vaughan than Clara expected. All the beating does is cause stress about something that was inevitably going to surface… but not like this. It’s brutal, it’s not on Vaughn’s terms, or at an ideal time for Clarabelle.

Clara has been dealing with her desires for women, that it’s ‘sinful’ but accepting it, and she’s suddenly thrown for a loop discovering that the woman she’s falling in love with was born a male – and this is 1933 so there’s no person to sit down and talk to about how you feel or what it means. So Clara has to process it herself. 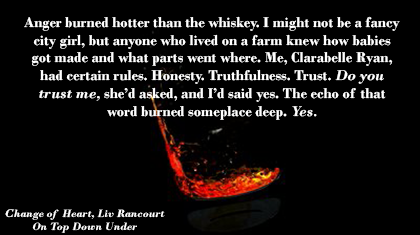 Vaughn’s desperation to wear women’s undergarments that make her feel right and comfortable no matter how difficult when she is injured and laid vulnerable and bare, having to be nursed by someone she doesn’t know will accept her with the genitalia she was born with, is conveyed with compassion, and Vaughn’s intense need to remain who she identifies as patently clear. Clara working through her feelings and thoughts was also crystal clear. There’s no melodrama. There’s no gratuitous scenes. Just well written emotion and desires and understanding that love can most definitely be about hearts not parts, but that does not mean it comes without any processing of new and different data, so to speak.

This novella is utterly engaging. There is a great sense of time and place and love – the people, the language, the fashion, New Orleans – everything is alive and vibrant. Liv Rancourt handled that on point. She has also written a (mtf) transgender character, in a time when transgender wasn’t even part of the vocabulary, with great sensitivity and dimension. Vaughn doesn’t have a POV, this book is in Clara’s, so all actions had to speak volumes. Vaughn’s spoke of her absolute need to be recognised purely as a female.

Queer fiction and romance, as is the case with this novella, need more quality trans books. This novella is sensitive and lovely, and I can’t recommend Change of Heart highly enough. I’m not sure I’ve done it justice in my review but I hope people who read queer romance or fiction pick it up. It’s delightful and kind and loving. 5 Stars! 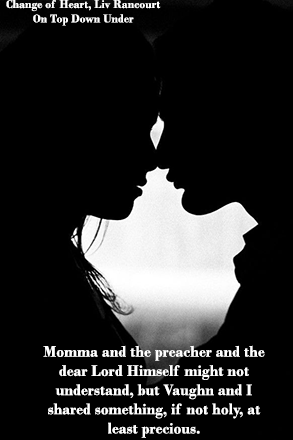 What an amazing review. I can only imagine how difficult it would be for Vaughn in 1933. It’s difficult now – when it shouldn’t be – but times were much different back then. It sounds like the author wrote her character with sensitivity. This looks like a great novella.

Yes, there is still a long way to go for trans rights and acceptance and understanding. It was known back then, not as transgender, not by many at all, though I do not profess to be knowledgeable about transgender history. This book sheds a light on acceptance and falling in love with that which makes a person uniquely and beautifully them.