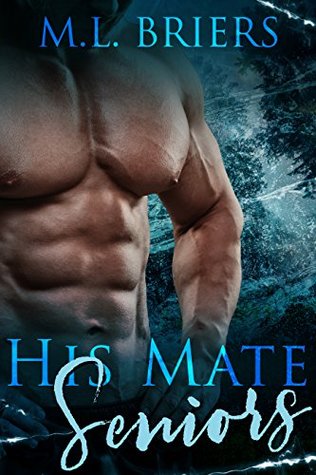 Rating: 3 “Please Get An Editor” Stars

***His Mate – Seniors. A brand new 40,000 word wolf shifter romance novel from the writer of the His Mate – Brothers series and the Bear-ly bear shifter series.***

Sarah had inherited her Aunt’s Inn and with it a whole load of troubles. She didn’t have a clue when she got there that on the other side of the woods was a pack of wolf shifters. Nor did she know that her aunt had a friendly vampire that lived nearby and liked to visit often, and she had no idea that she’d find her mate.

When Nathan had answered the call from his brother for help; he never expected to find three feisty witches, a problematic vampire, and an Inn that could be haunted, but that was exactly what he got. Along with a mate that was on the lunch menu from a newbie vampire. Where would he find the time to woo his one true mate?

Caution; contains snarky witches, a sarcastic vampire or two, and a wolf shifter to die for.

I’m going to start this review with a bit of a rant. I’ve read a lot of books that were full of typos. I’ve read some that had so many that I had to read the same sentence several times just to make heads or tails of what I’d just read. But strangely a majority of those weren’t nearly as bad as what I just read in His Mate – Seniors. Improper use of you’re and your, too instead of to and vice versa, semicolons in almost every single paragraph… I could go on. This was by far one of the laziest books I’ve ever read in my life and I have read a lot of books. It read like a first draft that hadn’t even been proofread one time. And that’s a shame because the actual story was damn good.

And I’m curious. What’s with the ~ ~ ~ ~ ~ ~ all over the place? I guess they were meant as dividers? I’ve seen them used as dividers in books before so no biggie, but seriously? After almost every paragraph? It made no sense to me. It made the actual text look sloppy.

With all that being said, I actually did like the story. It has a little bit of everything. While it’s a romance between a young (ish) couple there are also a couple of other romances going on in the background, one of which is between seniors. As in, old enough to be in a nursing home seniors. I found that part of the story to be adorable, though the female was beyond annoying with her constant sarcasm.

The book starts out with Angela and Dorothy escaping from a nursing home. It’s kind of cute because their banter is hilarious. They don’t really know where they’re going, only that they want out of that place. Once they’re clear they meet a young woman, Sarah, who offers her home to the wayward seniors. Sarah just inherited an old Inn from her Aunt Chloe and she knows the instant she meets Angela and Dorothy that they’ll fit right in at her new home. 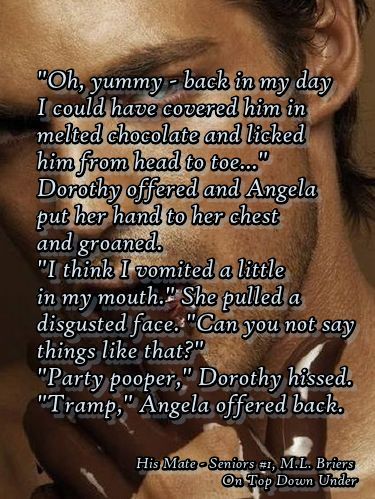 Why would a total stranger invite two elderly women to stay with her as soon as they meet? Sarah is a witch and she can tell that Angela and Dorothy are as well. Not long after they move in one of the women has a problem with the plumbing in her bathroom so Sarah calls a plumber. The plumber, Samuel, is a wolf shifter and the witches don’t take too kindly to him for some reason. In fact, the three women are downright rude to the guy. I couldn’t quite figure out why but it worked out because Samuel ended up having to call his alpha, Nathan, because Sarah had slammed the door in his face. With Nathan comes Lark, an elderly wolf shifter, who spots Angela and immediately thinks, Mate! I adored Lark. He was so entertaining even when Angela was being really bitchy.

Lark isn’t the only one thinking, Mate! As soon as Nathan sees Sarah he knows he’s found his as well. The problem with that scenario is that Sarah – like Angela with Lark – doesn’t want to be anybody’s mate, especially a wolf alpha’s.

Then we get to Aunt Chloe and Monty. Monty is an older vampire (I did say the story had a little bit of everything) who turned his own mate, Chloe, into a vamp as well. When Chloe died she was elderly. As a vampire she’s quite young. The problem with Chloe is that being a newbie vamp means she wants blood all the time. This causes a problem with the three witches and Lark and Nathan. Nathan is all about protecting Sarah, though Sarah can take care of herself, thank you very much. Lark wants to protect Angela, who would rather chew nails than have a wolf mate. Dorothy, who’s hilarious, just sits back watching and being entertained.

Sarah and Angela took the ‘I don’t want to be mated to a wolf’ thing too far. When they both decided that it wasn’t such a bad thing it happened entirely too fast. They spent the entire book fighting their guys only to just give in when it came time to bond. That wasn’t in line with what I’d read to that point. The Chloe parts of the book were cute to an extent. She wanted inside the home (the Inn) but couldn’t go in without an invitation and nobody was willing to do an invite until she got her blood lust under control. I’ve read the blurbs for the next two books in the series so I know that’ll be an ongoing thing.

I loved the men in the book – Nathan, Lark, Monty. The women, not so much, with the exception of Dorothy. I hope she finds her own man soon. Unlike Angela, Dorothy isn’t afraid of having sex at her age and has no problem letting everybody know it. She was a treat.

I’m on the fence about reading the next book in the series. I want to see Dorothy find love but I’m not sure how I’ll feel if I have to read page after page of typos like I did this one. I know I’ve really harped on that in this review but if you read the book you’ll know why. I knocked a star and half off my rating because of it. This was a freebie on Amazon. Had I actually paid for the book I’d be really pissed.

I’m over books with typos, and crappy formatting, etc., you’re a better person than me, Cindi. Get someone to go over the manuscript, dear writers, because you might sell more books.

The concept of this book sounds really good. I will make it my duty to escape a nursing home and misbehave as much as possible in my older age. Volunteer to help out?

Then I just saw the shitty comments left on your review on Goodreads – you should not give this author a platform here on our blog for their slapdash work. This review is fair and honest.

Thanks, Kazza. I was actually going to purchase the next one in the series – I DID enjoy the story, with the exception of the poor editing – but the comment left on my Goodreads review by a fan of the author killed that. I won’t be reading any of her others. I type it as I see it. A few typos I could overlook. I couldn’t overlook them being in almost every single paragraph in the book. I actually feel sorry for the author because this ‘fan’ isn’t doing her any favors. I can totally see the two of… Read more »

Cindi, Firstly, thanks for the review. I think three stars is very fair. I know there are issues with the editing, and I was pointed towards Grammarly (I’m guessing I wasted my money on that.) I’ve seen the Goodreads snafu, but I don’t have an account on there and make it a policy not to comment on reviews (err, except this one…) I guess you just got your first one star review (Sarcasm) sorry about that. I have some loyal fans (apologies.) I can gift you the other two books if you promise not to review them on Goodreads (Sarcasm.)… Read more »

I don’t fault authors for what their fans say. I just don’t normally get attacked over my opinions by these fans. I take great pride in my reviews and one thing I’ve never been accused of is being unfair. I’ve ended the ability for this person to comment on my Goodreads review. I’m much too old to play childish games with a total stranger and this has gone on too long. If I choose to continue with the series I’ll purchase the books as I’d originally planned. Thanks for the offer, though, and thank you for your comment. I really… Read more »

I don’t find it the least bit amusing that you talked about Cindi receiving a 1 star review for her review. It is totally unacceptable. There are loyal fans and then there’s appalling behaviour, separate the two.

Cindi is far more generous than I am.