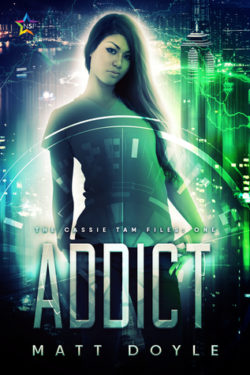 New Hopeland was built to be the centre of the technological age, but like everywhere else, it has its dark side. Assassins, drug dealers and crooked businessmen form a vital part of the city’s make-up, and sometimes, the police are in too deep themselves to be effective. But hey, there are always other options …

For P.I. Cassie Tam, business has been slow. So, when she’s hired to investigate the death of a local VR addict named Eddie Redwood, she thinks it’ll be easy money. All she has to do is prove to the deceased’s sister Lori that the local P.D. were right to call it an accidental overdose. The more she digs though, the more things don’t seem to sit right, and soon, Cassie finds herself knee deep in a murder investigation. But that’s just the start of her problems.

When the case forces Cassie to make contact with her drug dealing ex-girlfriend, Charlie Goldman, she’s left with a whole lot of long buried personal issues to deal with. Then there’s her client. Lori Redwood is a Tech Shifter, someone who uses a metal exoskeleton to roleplay as an animal. Cassie isn’t one to judge, but the Tech Shifting community has always left her a bit nervous. That wouldn’t be a problem if Lori wasn’t fast becoming the first person that she’s been genuinely attracted to since splitting with Charlie. Oh, and then there’s the small matter of the police wanting her to back off the case.

Lori Redwood approaches PI Cassie Tam to find out what happened to her brother Eddie. He was found dead of an apparent OD of the synth drug Flash7 while hooked up to his computer. Lori swears he wasn’t a user of synths and he had signed a contract with a company to go pro, so there is no way he would OD. Cassie doesn’t believe Lori at first, can’t see a reason as to why it’s anything more than a sister in denial. A lower-ranked police officer also investigated the death. In New Hopeland having a lower ranking cop on a case means a better chance of a legitimate report and less chance of self-interest.

New Hopeland is a city built over part of what was Utah and is a futuristic technology centre. Of course, where there is constant use of computers and all it’s associated activities there’s often addiction, just think of gaming and social media these days. People here use virtual reality to talk and interact outside of work and work is already tech-centric. Where there is addiction to one thing others follow, like synth drugs. It also means there is money to be made, which means all the associated problems, such as big business, deals, and corruption. The police force is not without its finger in the pie either, they’re not above, or below, using drugs, hitmen, and being in bed with big business. Whatever the drug dealers or big business can do, so can the cops. So they have an arse-covering alliance with tech co’s, dealers and the shady side of business. It isn’t really appreciated that Lori is looking into Eddie Redwood’s death but since she starts with a pretty blasé and show me the money attitude it doesn’t cause her too many problems. In this world PIs and cops are more closely linked and PIs are able to issue search and arrest warrants like the cops do. Cassie has a few friends on the force and Captain Hoover is a decent, straight cop who gives Cassie a degree of help and latitude as she works the Redwood case.

There aren’t a lot of obvious reasons as to why someone might have killed Eddie, or even why he might have ODed, so there’s a bit of digging for Cassie to do to prove otherwise. A primary suspect suggests to Cassie that Eddie was sometimes writing under a pseudonym for a blog called The Roots of Eden are Rotten, a somewhat zealous blog, and maybe she should look at that more closely. This adds some fuel to the fire of why someone might have killed him, but is it just a smokescreen? Then there’s some software that Eddie is supposed to have written that can be an add-on to the popular SnapDragon Suite, something that could allow users to go onto computers and be undetected… meaning more money to be made.
.

What worked for me :

I liked Cassie, which is good as she is the voice of the book, I found her believable as a PI. She has a penchant for old-school things, including guns… and venetian blinds, go figure, and she’s pretty no-nonsense and analytical. While she may not believe Lori first of all, I liked her dedication to the case and how she worked through everything possible. She’s also straight up and down. She does her job with an eye for detail and she’s not a smartarse. Cassie can take care of herself when necessary and she has a great little sidekick in Burt.

Speaking of, I was so intrigued by Burt, Cassie’s Familiar/protector. Burt gives the book a quirkier, more cyberpunk vibe – Caw. He needed extra page time, but maybe that’s coming next book?

I liked that Lori is a tech shifter with a kind of metallic and retractable exoskeleton that plugs into ports built into her body. Her shifter name is Ink and she’s a panther. She goes to a local club and is involved in fetish shifter play, much like puppy play. While Ink is a panther shifter, the other tech shifters at the centre are varied in their shifted forms. There are different types of shifters in this world, not just tech shifters, which I would have enjoyed seeing explored more. Once again, maybe next book.

In general this book tends toward being technology/computer and crime/plot driven as opposed to character driven.  I’m a character obsessive so sometimes I had to put that side of me on hold and get involved in the plot and technical side of the story. Explanations of places and people as IP addresses is very, very apt to the story being told, so is the use of computers and the links of everything to everybody and their control by a peak body.

Online shopping at branded sites all originate from 17C.ACD998.16.16DDA, so it’s most likely that belongs to his home address.

The purchases aimed at tech supply retailers are spread across four—no, five IP addresses, which I’m assuming are his offices.
.

I wanted more world building. New Hopeland isn’t explored like it should be. People. Places within New Hopeland needed more overall detail because a crime and the MCs don’t exist in a vacuum.

Lori was fine but needed more development – she faded into the background. Her shifter side also needed so much more. I mean, how interesting is a tech shifter with their body ports and their whole sci-fi look? Very. When they were at the club I would have loved to have been privy to more of what they did. They are classified as fetishists, so add some of that fetish. Give us a bit more on the other shifters too.

I just felt like I was missing pieces of Cassie outside of work. While some of those pieces started to fall into place at the very end, I wish it had been built upon as the story progressed so I knew who she was and why she was a PI. Why she was in New Hopeland as opposed to Canada. Even her relationship with Charlie, her ex, needed more development. The first book should give us more intimacy with the characters.

While this in no way affects my rating of the book, I have to mention it because every time I look at the cover it irks me. NineStar Press turn out some very interesting to fantastic covers but really dropped the ball with this one. Cassie is part Asian part Native Canadian with a definite voice. She also dresses in black slacks, a white shirt and a tie – that is her comfort and her self-imposed uniform. This cover does not say futuristic, analytical female PI with a strong voice. It says somewhat exotic female, in an awkward pose, looking to be picked up… while she’s somehow hovering over a generic looking city. Fail.

Addict is a pretty decent first book in a series. It has an interesting storyline and an interesting female lead. It also contains intriguing types of tech people – the shifters – and tech creatures – hi, Burt.  The last third of this book picked up the action too, and Cassie kicked some butt. I’d love to see more of that. I’m also hoping for extra depth and dimension in the Cassie Tam Files #2. More character connection and development and world building amongst the tech elements and crime-solving would be good. Recommended for people who like a plot driven UF/ spec-tech/sci-fi/cyberpunkish noir feel to their books and don’t mind female leads and a (kind of/sort of) lesbian romance as part of the overall plot. Something different with more of a promise of things yet to come. 3.5 stars!

Review copy supplied in return for an honest review

This looks like an interesting story. As I’ve said many times before, I love books with strong female characters. Cassie seems to definitely be strong. I’d be curious to know what happens next.

Good MC. Interesting story with a load of potential, and different. All good things.