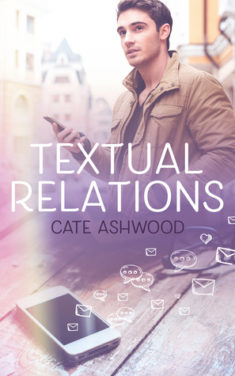 Evolutionary psychology professor Henry Hathaway is ready to spend his birthday the same way he does every year: a good teeth cleaning followed by lunch with his brother. But when he receives a wrong-number text confirming the details of a date, he does what any considerate person would—he goes to meet them and explain why they’ve been stood up.

Asher Wescott hadn’t expected his blind date to go well, because when do they ever? Henry shows up instead, and things are suddenly looking up. Socially awkward and attached to his routines, Henry is nevertheless one of the most charming and kind men Asher has met in a long time.

Too bad he’s not Henry’s type.

An accidental date, an impulsive kiss, and a few conflicted feelings later, can Asher get Henry to see the world—and him—in a different light?

The tags on this review are not meant to confuse. Asher is gay, therefore gay. I found Henry to be more believable as demi-sexual (maybe bi) than a straight man who suddenly turns gay in a romance novel, hence my tags. Bi is used in the book by Henry as a possibility as to why he is so attracted to Asher but other thoughts are processed as well, all are plausible. It’s just my opinion, but the author does use GFY as one of her tags – so bear that in mind.

This was a very sweet, very gentle romance between two characters I thought were really charming. Not long before this book I had just DNFed a book with annoying MCs, so these MCs and this storyline were just what I needed.

Henry is a thirty two year old psychology academic who isn’t keen on change and has had very few people in his life or in his bed. Megan is his ex and a colleague and along with Calvin, his brother, they form the basis of Henry’s friendship group. He doesn’t have a partner, hasn’t since Megan, which was some time ago, and every day he does the usual. Birthdays mean lunch with his brother then home. Saturday is his BLT with avocado day. He lives without deviation. It’s pretty easy to get into a routine and I understood Henry and I found him quirky and definitely kind and sweet. When he receives the mistaken text, for example, he feels compelled to make it right. He wanted to make sure someone wasn’t waiting on a date who wouldn’t turn up. It was both kind and a random break for Mr Routine which sets a romance in motion. I was so glad because I like to see nice guys finish first.

The blurb tells you what this novella is about. What it can’t tell you, and what I can add, is the writing is pretty, sensitive, thoughtful and romantic. The MCs are without drama and baggage. The deepest moments consist of Henry having some self-analysis about his attraction, what it means to be attracted to Asher. That doesn’t last terribly long or become a drama because he allows his heart, his mind and his body to take him where it must and where it will, and he doesn’t fight it.

The only downside, and it really isn’t a much of one, is that this novella is solely Henry’s POV. Would I have liked to have been privy to some of Asher’s thoughts? I guess so, but I felt like he was who he was. He had a great first (unofficial) date with Henry and he enjoyed not being so keenly sought after this time, not so easily jaded by this potential relationship with a sensitive and smart man. That Henry was also willing to break his rigidity by joining in things that Asher suggested was also alluring to him.

The sex builds well, and it’s sexy because there is emotion and a growing awareness involved in all of Henry and Asher’s tactile and sexual moments. Nothing moves too swiftly or too slowly. 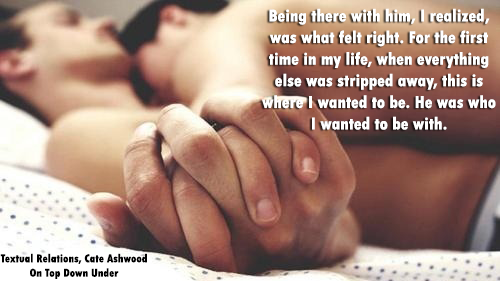 It’s been a while since I last read Cate Ashwood, not because I didn’t enjoy her writing previously, because I did, but I can see such growth and depth in her writing since that last book. Textual Relations is mature, sensitive and sexy contemporary romance storytelling. It’s complete with charming, sweet and engaging MCs to help you feel happy and connected, to help take you away from this crazy world for just a moment in time. You also get an epilogue and a happy ending. Overall, I thought this was a really lovely novella. 4 Stars!

I love a good sweet romance. There are times I want books that don’t have characters who are bogged down with drama. I can tell I’d love Asher and Henry.

Me too. Sometimes I just want to kick back and find some ease and comfort and I found it in this novella with this story.