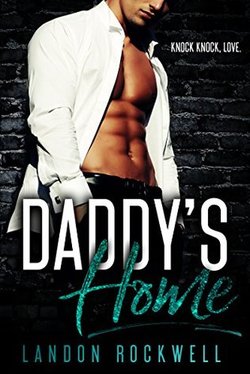 He’s my only client’s son.

And he wants to call me daddy.

Cruz needs Gordon’s investment to get his new business off the ground. In commercial real estate, he lost his previous job over things that aren’t made clear in the story. Gordon is his only investor so he has to win him over. When Gordon asks Cruz to babysit his twenty-one-year-old son Reese for a weekend Cruz agrees. Reese is moving back to Boston from L.A. and his father is much too busy (heavy sarcasm) to be there when his only son arrives.

Reese is trouble from the get-go. After giving Cruz the runaround, Cruz eventually finds him at a bar having one drink after another. He immediately starts taunting Cruz and then makes it clear that he won’t be babysat by one of his father’s cronies. Yeah, well, about that…. Because Reese has had one drink after another he doesn’t have much of a choice. Passing out drunk in the parking lot of the bar pretty much decides for him. Cruz takes him to his condo and dumps him on the bed, leaving him on his own.

Cruz is beyond frustrated – sexually frustrated. The whole time Reese had been downing drinks at the bar he was teasing Cruz and calling him daddy. Cruz got harder with each word that came out of the other man’s mouth. Leaving him passed out on the bed is difficult but Cruz isn’t stupid. He’ll sleep on the couch, babysit the spoiled brat for a couple of days, then get on with his life, hopefully with Gordon’s investment.

Of course, things never go as planned, do they?

The next morning the daddy taunts continue and Reese is being dominated – consensually – as Cruz pounds him into the mattress. All is well and good and the two are actually getting along a little. Their sexual chemistry is off the charts even if they are as different as night and day otherwise. They even manage to get out for a few hours and enjoy the day.

This is when things changed.

I can’t think of the last time my opinion of a character changed as quickly as it did with Cruz. One minute I was liking the guy and thinking, “Holy shit!” on the sex. The next, I was thinking, “Run, Reese, fast and in the opposite direction!” He made up for it later but the deed had been done and he was no longer likable to me. There’s getting upset over something and there’s getting upset over something and verbally attacking an innocent person simply because you’re incapable of handling your emotions. Unfortunately, there was no coming back for me with Cruz.

Reese was – in the beginning – your typical poor little rich boy. He played the part well but there was more to Reese than met the eye. He was just a sad man who wanted his father to treat him as more than a nuisance.

The sex, as I said, is hot. Reese is all over the ‘daddy’ thing and Cruz eats it up, though he tries to pretend he’s not actually getting off on it.

What didn’t work for me –

Overall, this is a nice, quick read. Normally daddy kink is more my blog partner’s style than mine but I did enjoy that part of this book. I would read more by this author.

It definitely sounds like this book needed the full page count allocated to it because it required more time to develop the characters properly. I’ve read a few books like this, nowhere near the page count stated and (in my case) I found other stories being promoted. Frustrating and rather sneaky.

Totally you on the daddy kink. 🙂 I had entirely too much fun ‘researching’ for the perfect GIF. Can you tell? *snort*

This definitely needed the full page count allocated to it. I couldn’t really get a feel for the characters outside of the bedroom.

I get aggravated when books stop in the middle and go to something else – unless I know it’s going to happen. I’m seeing that and inflated page counts all over the place.