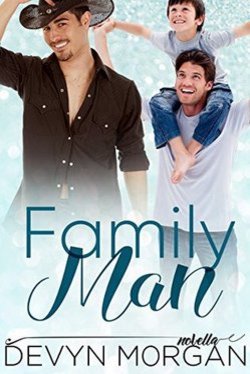 Back in the heartland town he escaped years ago, Van Farley finds the occasional beer and eye candy at the one and only local gay bar, catering to the Stetson set. Everyone’s got eyes for the new man, but Van must keep his head down and not risk his job as a teacher. That’s fine, until hot-and-doesn’t-know-it Jacob Strickland walks in.

Jacob grew up fast, settling down to give his pregnant, teenaged sister some stability. He doesn’t date, dedicating himself to being a suitable father figure for both his sister and his nephew, now old enough to start school.

When Jacob gets dragged out to a local club, a sex-on-legs stranger gives him a night to remember.

One night only. No repeats. They’ll never see each other again.

Until the first day of school.

Family Man is a standalone novella with hot guys, a cute kid, and an HEA.

Jacob is at the one and only gay bar in town. His flamboyant cousin, Cody, thought Mr. Serious (Jacob) needed to get out and get laid so he talks him into going out with him. The problem with that is that Cody is outgoing and never meets a stranger where Jacob is more the wallflower type. He sits at the bar nursing a beer as Cody hooks up with as many guys as he can in a short amount of time. Cody drove so Jacob is stuck. Everything changes when a hot ‘cowboy’ stalks over to Jacob and makes it known that he wants him, like now. Jacob doesn’t have to be asked twice. The ‘cowboy’ is sex on a stick and everybody in the place wants him. All Jacob can think about is getting the man naked. Jacob’s life is normally full of responsibilities so what would it hurt to let his hair down (so to speak) just once? It’ll be a one time thing and he’ll never see the guy again. Sounds like the perfect plan. Right?

When Van sees Jacob in the bar he knows he’s going to have him before the night is over… and he does. He doesn’t give Jacob his real name – what’s the point for a one night stand? – but he ends the evening having just had the best sex of his life. He doesn’t want to leave him in bed but he knows he has to. He has a lot going on in his life and can’t get involved with anybody, even a man he can’t get out of his head. Not to mention that Van is in the closet with his grandfather and others in town. What would happen if Grandpa rejected him? He can’t take that chance.

Van being back home is not by choice. When he was old enough he got out of small-town Prosperity, Alabama, as fast as he could. He and his sister were raised by their grandfather when their parents decided they didn’t want to play mom and dad anymore. He went to college, became a teacher, and moved to Atlanta and stayed there. He swore he’d never come back to the town he grew up in and hated but here he is, working his grandfather’s farm while the older man recovers from a broken hip. It’s only temporary, so he doesn’t attempt to put down roots. Only the ‘temporary’ thing turns out to not be so temporary after all.

When Jacob was younger his kid sister, Sara, got pregnant. When their parents didn’t accept it, Jacob did. He’s taken care of Sara and the child (Andy) and made sure they’ve had everything they needed. He a good uncle to Andy and a good big brother to Sara, who’s a college student. Jacob is a mechanic at his own garage and works hard to keep things as normal as he can for his sister and nephew. He has no time for love or even sex really. That doesn’t stop him from having sex with the ‘cowboy’ he meets at the bar. Unfortunately, when the man leaves Jacob’s house he doesn’t leave Jacob’s thoughts.

Jacob and Van go about their lives separately and without bumping into each other for the next several weeks. This doesn’t stop Van from going to the same bar in hopes of seeing Jacob again. It doesn’t happen. When they finally do see each other again it’s in the last place either expect. 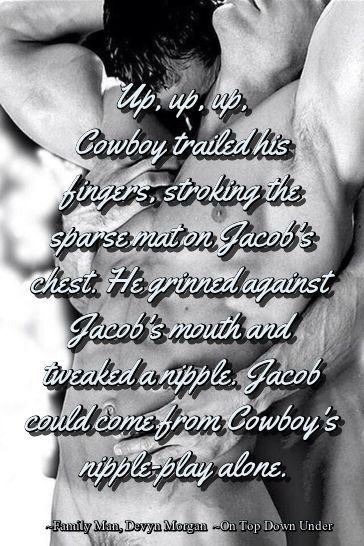 To support himself while Grandpa recovers, Van takes a position as a first grade teacher at the local elementary school. Imagine his surprise when the man he can’t get out of his head shows up with a little boy – one of Van’s new students – on the first day of school. Both are shocked but recover quickly. This begins a back and forth thing between them. There are misunderstandings but they don’t stop them from wanting each other. Unfortunately, Van has a few bonehead moments that Jacob takes to heart so he tries to avoid him as much as possible. But alas, this is a love story so you know they work out their issues and come together. When they do, it’s an Aww!! moment.

There are so many things I loved about this story. I’m a sucker for kids in books and I simply fell in love with Andy. I adored Van and Jacob right off. I can’t say enough about how sexy Van was as he stalked – and later had sex with – Jacob the first time. I mentioned Van’s bonehead moments but they can be overlooked because of the other stuff. 🙂 There’s Van’s Grandpa, who’s amazing. And I can’t say enough about Cody. He’s loud, he’s flashy, and he enjoys sex and doesn’t give a damn who knows it. Either you’ll love Cody or you’ll hate him. I don’t think there could be an in between with him.

“Cody, we have zero in common.”

He’s not the man I can’t get out of my head.

“What? You both have dicks, don’t you? You both like sex. You live in the same town. That’s plenty in common.”

The book is set in a small town in Alabama. Those who know me or follow my reviews are aware that I’m in Alabama. I normally shy away from books set here because they’re usually filled with the ridiculous redneck stereotypes. That most definitely wasn’t the case with Family Man. There were a couple of reckons and ain’ts but the author didn’t bog the story down with silly southern speak. Southern speak is good to hear but it doesn’t usually carry over in print, as I’ve been known to complain about many times in my reviews.

I can’t not mention something else in regards to Alabama that’s really quite insignificant but it stood out for me. At one point in the story Jacob is wearing a Crimson Tide hat. My entire life is planned (in the fall) around Alabama Crimson Tide football so it was nice that the author used the right Alabama college team in the story. Only those who are serious followers of college football – or live in the state of Alabama – will get what I mean by that. 🙂

Overall, I loved this. I’ve read Devyn Morgan before so I went into it somewhat knowing what to expect. It’s rare for me to love almost all the characters in books – even the secondaries. I definitely did in this one. It takes a little while for Van and Jacob to get it together but when they do it’s beautiful. Fantastic story and highly recommended.

This sounds like such a Cindi book. When it was one of our Weekly Book Deals I thought it had you written all over it, but I know you hate it when they do the southern speak thing so, yay, the author got it right. I laughed at the ‘Jacob Got Laid’ holiday 😀

Great review, Cindi and I’m loving the GIF/pic and quotes : )

Thanks, Kazza. It is such a Cindi book. You know I’m a sucker for a good romance and if it has a kid in it, even better. Southern speak makes me nuts, as you know. I had no idea this was set in Alabama until after I started reading. Thankfully, the author didn’t make them all a bunch of stereotypical rednecks. 🙂

I had fun with the GIFs and quotes. And of course on the Roll Tide. 😀