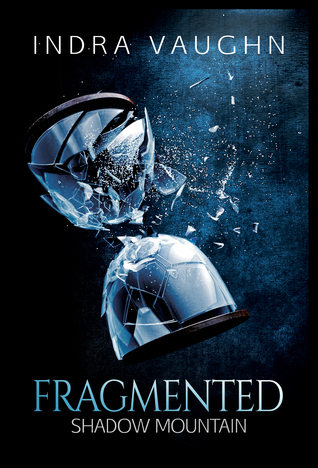 The capture of the Tattoo Murderer has demanded a heavy price. Doctor Tobias Darwin is dead, Lieutenant Hart is back in Riverside licking his substantial wounds, and he needs to gather his courage and tell Isaac he made a mistake. Isaac will forgive him—he knows that—but he can’t promise Isaac an easy life. Being a cop comes with its own risks, after all.

When they finally reach the same wavelength, their idyllic reprieve is cut tragically short. Hart doesn’t know yet that Isaac is terminally ill, that he will take off to find the Phoenix to heal him as a last resort. This time, it will be Hart who pays the price.

In the meantime, a new killer roams the streets of Riverside. He kidnaps, tortures, and kills gay men in horrific ways, and he has the newly healed Isaac in his sights. Hart’s time is running out on every level.

Fragmented is the highly anticipated sequel to Indra Vaughn’s suspense filled thriller Fated, from the Shadow Mountain trilogy. People who enjoyed the first book will love Fragmented as it is generally considered better, which is hard to top as Fated was an excellent read but I have to agree wholeheartedly with the majority of people who have found this to be true. I’m usually disappointed with sequels but not with this one. It was excellent but it was also very different in many ways. There was still the basic workings of the first book running in the background but the overwhelming sadness of the prominent plot in this book was refreshing and also highly emotional. The major storyline that runs this novel is not nice, but that is what makes it so good. It’s so refreshing to read something with a novel approach to it. Because of the paranormal touch it makes it more grounded and credible, without coming off as ridiculous and removes it from the majority of formulae created works within the M/M genre.

This sequel will not disappoint as Indra Vaughn has outdone herself. The writing flows beautifully and the plot is tragic with a twist that reveals more behind the true nature of the mysterious Phoenix. He is humanoid in appearance and people are not supposed to remember him coming to them at their time of death, but it was insinuated in book one that they had to give consent to him to save their life before they died. I loved that but it seems that nothing is free and it comes with a price that no one remembers, even if they’re told of this, but you never find out. It’s different for everyone too and I get the feeling that he takes something different from everyone too, the mark of a healed person is also divulged and I loved that little spin on things.

This story about Hart and Isaac is painfully sad, just as Isaac finally approaches Hart to make amends and they rekindle their relationship, it’s blissful compliancy is shattered beyond repair as Isaac drops a bombshell that he is dying and it’s incurable. Once he has his final check up and it’s confirmed by his Dr. that his diagnosis is correct, Isaac disappears and Hart knows exactly where he has gone, in search of the Phoenix to be cured, but what is his price for it? A shitload of tissues for the reader!

Hart calls ahead to the partner he was assigned to while helping Brightly PD who accompanies him up Shadow Mountain to find Isaac. By the time they arrive the healing had been completed and was 100% successful. Isaac is now cured but it comes at a shocking cost and they both find themselves single again. Hart is so distressed that he throws himself into his work as another serial killer is on the loose. The killer is targeting young gay men, who mysteriously vanish for up to two weeks then turn up dead from dehydration and starvation, not to mention other atrocities inflicted upon them as they slowly die. With three dead men on their hands already, the Riverside PD goes into overdrive to catch this serial killer before the press catches wind of it but his last victim’s autopsy shows a vital clue.

Isaac inadvertently discovers this clue forcing the younger University student to help the police catch this guy and in the process he’s made to work with Hart before vanishing back to University.

This might seem like an extended synopsis, full of spoilers but it’s not. Sure I’ve spoken about large pieces of the story but I have not given anything of major importance away – please feel free to tell me if you think I have, only once you’ve read it though.

This is what really grabbed me about this book. I could write more but that would just leave you waiting for it to happen but this is one book that I can’t quote from. One quote after chapter two would ruin everything and before that it’s still very interesting but nothing quote worthy.

There are so many scenes in this book between Hart and Isaac that are just so very sad and they just keep on coming. If you’re not a fan of sad, tense frustration but you enjoyed the first book I still highly recommend that you push past that and make it a personal challenge. It’s worth every page and kleenex.

Great review, Paul! I can tell you really enjoyed this one. If I read this series, I’ll make sure to keep Kleenex handy. 🙂