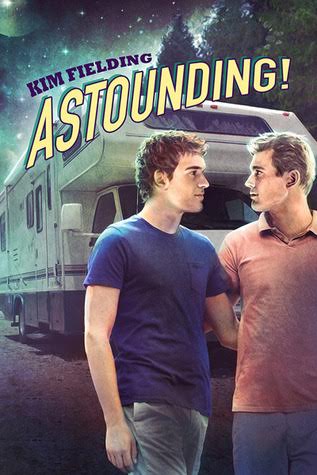 Carter Evans is founder and editor-in-chief of Astounding!—a formerly popular spec fiction magazine currently in its death throes. Not only can he do nothing to save it, but stuck in a rathole apartment with few interpersonal connections, he can’t seem to do much to rescue his future either. And certainly all the booze isn’t helping. He snaps when he receives yet another terrible story submission from the mysterious writer J. Harper—and in a drunken haze, Carter sends Harper a rejection letter he soon regrets.

J. Harper turns out to be John Harper, a sweet man who resembles a ’50s movie star and claims to be an extraterrestrial. Despite John’s delusions, Carter’s apology quickly turns into something more as the two lonely men find a powerful connection. Inexplicably drawn to John, Carter invites him along on a road trip. But as they travel, Carter is in for some big surprises, some major heartbreak… and just maybe the promise of a good future after all.

I absolutely love it when Kim Fielding decides to go on yet another genre freestyling endeavour. I get chills when she does this.

Like so many of her other books you just never know what to expect. Its like oh, she’s chosen this genre, but what is she going to do with it? Whenever I read the blurb to one of Kim Fielding’s books and I get that excited itch begging to start between my shoulders, I know I have to get that book in my hands ASAP.

I’ve never been let down once when this happens to me. Every time one of her more intriguing synopses pops up I’m never disappointed. These are the books she writes that I cherish because another bizarre and highly creative story has been crafted and they always turn out to be exceptional books that I can’t put down.

The next thing I know the sun is rising and I’m on the last page yet again. Astounding! was quite slow to begin with, but picks up the pace as it goes along. It wove itself into a magical tale and latches onto the reader to take them along for a stunning, yet heartbreaking ride.

Astounding! is Carter Evans and Carter Evans is astounding, but he doesn’t quite know it yet. At 37 all his dreams, aspirations and hard work to keep his spec fiction magazine running is futile, and after struggling for months he finally concedes to his painfully stubborn nature and prepares to publish his final edition. Even Freddy, his ex-partner in both business and pleasure, that helped him begin his publication Astounding about 15 years ago has long moved from Seattle onto bigger and better things, now rubbing shoulders in L.A and having people squabble over him to put his novels on the screen. Freddy and Carter are still best friends and Carter is genuinely happy for his success. He also likes his longtime partner, Keith, but his hard hitting of the bottle over the last few months is beginning to make him bitter about everything.

Carter’s years of hard work editing stories and making new writers careers bloom has come to an end. He is up to his neck in debt and too proud to tell anyone about just how bad it is and far too proud to ask for any kind of financial help.

The final straw comes in a drunken blur as the never-ending arrival of another shocking story from one J. Harper arrives, just as he realises that he is about to print his final edition. The mystery man has been sending in bizarre stories for years about an alien that’s stuck on earth with no way home and he’s extremely lonely. The basic premise of his manuscripts doesn’t vary much and neither does his woeful writing.

So J. Harper, who has been sending him these utterly useless stories for years, is on the receiving end of Carter’s wrath as he spits out one nasty drunken rejection letter. He doesn’t realise that he posted it until he returns home the next night to see it pop into life as he switches on his home computer and it’s staring him in the face.

Carter is so mortified, as it’s out of character for him, that he actually travels from Seattle to Portland to apologise in person. As John Harper opens the door to Carter Evans, he is shocked that Carter has driven all this way and ends up making a deal with John out of guilt, saying OK, you give me a good enough reason in person as to why you’ve been sending me these stories for years and if its good enough, I’ll publish it in my final edition.

John is so shattered about this, more so over the fact that he needs his story in this soon-to-be final edition, he then proceeds to take Carter out for dinner and then drinks. He’s nervous, but finally cuts to the chase and tells Carter the truth, explaining his story. As crazy as it seems, Carter indulges John’s delusions as he seems like a nice guy even though he should probably be in a psych ward. It gets too late for Carter to drive home so he very cautiously spends the night on John’s couch, but a middle of the night dash to the toilet suddenly turns around as Carter and John literally crash into each others lives, with Carter ending up in John’s bed.

Freddy still writes for Astounding! as he loves it, but little does he know that Carter has organised every kick ass author to submit one final article. No one knows that this will be the final edition so he indulges John and adds his article too. Freddy’s article is incredible, as are all the others, so Carter gets organised and edits frantically as he quietly packs up and sells off the last of his possessions, leaving his life behind without anyone knowing just how bad his situation really is. He wants to go out with an Astounding! bang, but it’s unfortunately going to be much bigger than he ever expected it to be.

Freddy, to his absolute shock, has finally convinced Carter during this time to take a road trip with himself and his partner Keith, shucking off the high life and deciding to rent a huge RV, fly to Seattle, pick up Carter and go from there – not having a clue that Carter has absolutely nothing to come back to as they head off out of Seattle on their road trip.

As they’re driving through Portland, Carter gets an overwhelming urge to stop by John’s place and the next thing they know, John is along for the ride. Much to everyone’s surprise.

While love blossoms exponentially between Carter and John within the span of a few days, Carter discovers that John has actually told him the truth. While Keith can’t figure out what the hell is going on every time he tries to take a photo of John, he get nothing but static where John is in the photo making it harder and harder to keep his secret in such a confined space.

This is where Kim Fielding rules the roost. She takes her time in a round about way with this beautiful story. The main characters are excellent, as is Freddy. The writing is slow and methodical in this novel, which I found a little disconcerting in the beginning, but it pays off in the end big time. It’s a slow and steady wins the race in this wonderful novel, as it slowly progresses and builds to a beautiful place.

Kim Fielding then steps in and delivers a swift and painful knee right into your solar plexus. Even though you know it’s coming it still manages to knock the breath from your body and leaves you gasping for air, but she keeps the pace of the book trudging along as it takes a 90º turn to allow a new chapter of life to go on.

It almost feels like a new book has begun. As one chapter is painfully closed a new one begins. With a fresh storyline, it’s almost a little jarring as it happens so fast and literally begins from scratch.

There is a completely new plot in place with new scenarios and friendships unfurling in a new town with a fresh start. It’s just written so well, and although it’s a huge jolt and a shock to the system, you’re guided into it somehow, and quite smoothly too.

The story you’ve been reading and are accustomed to is just gone and yet you get to slowly feel comfortable with this new plot quite quickly. It flows pretty smoothly into this new existence as you’ve just watched the beginnings of what feels like a metamorphosis of a caterpillar turn into a butterfly. It’s one of the only analogies I can compare it to because even though it such a sad and fast change, I felt like I got to watch a butterfly hatch to spread his wings and let me tell you, he was stuck in that cocoon for way too long.

So I have to applaud the way that was handled, due to some writing that was like the sleight of hand that a magician uses to distract you while you’re dealing with some great loss, but it’s not all bad as Carter finds his new life. He now has wings that no one can take away from him and if it wasn’t for that, who knows how things would have turned out for him? If these changes didn’t occur in his life he never would have survived the final smack down that gets thrown at him yet again, but I’ll let you digest that and figure it all out for yourselves.

If you’re a fan of Kim Fielding’s books that are on the stranger side of life then it’s a done deal. I had to think about this for a while to try and find the right words as to why I loved this story so much. It is just beautiful.