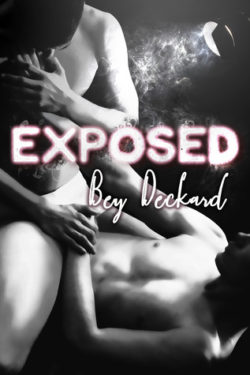 With middle-age looming, Greg offsets his boring day job with what truly feeds his soul: photography. The camera is an extension of himself where he exposes his passion for the intersect of pleasure and pain. However, the lens also acts as a barrier, protecting his subjects from the shameful mistakes of his past, and Greg is left isolated and lonely.

Emyr stands on the cusp of fame, but adulation and abuse are both eroding his confidence, and one night, at the river’s edge, he seeks solace in the rain, hoping to hide his tears.

The photographer and the virgin rock star share an accidental connection on that dark, drizzly night. When Greg invites Emyr back to his hotel room, no strings attached, the young man should have bolted. Instead, an odd sense of trust allows him to follow Greg’s lead.

When the camera comes out, Emyr learns the stage isn’t the only place he loves to perform as Greg touches something inside him that rarely awakens. Faced with a beautiful, talented boy whose soul is as lonely as his own, will Greg be able to face his past and come to terms with it, or will he run from the connection he so desperately desires?

I’m struggling right now to find contemporary romance that holds my attention for more than a few pages, but I enjoyed Exposed a great deal… and it’s both contemporary and romance. Mind you, it has daddy kink as a theme and that’s a real favourite of mine. I also enjoy a significant age gap, so maybe this all appealed to the pervy reader in me and the pervy side beat down my current contemporary romance conundrum.

Greg’s a forty something photographer from Canada who’s in London and happens to bump into up and coming early twenties transgressive muso, Emyr. Long story short, Emyr goes back to Greg’s hotel, Greg takes pictures of a shy and virginal Emyr and asks questions that get us to – no , Emyr hasn’t thought about guys, but then he hasn’t thought about girls either, there’s attraction, and off the story goes.

This book is a mix of sweet and sexy – it’s a nice commercial romance combo. It also wades into social commentary related to American politics and the LGBTQI+ community, although the MCs are Canadian and Welsh. Emyr is an emerging

music star and Greg a photographer who ends up being the official photographer on Emyr’s first tour. They hop from Europe – places like Sweden, Spain, France, etc., over to Canada, with a final destination of the USA – although venues are cancelling in the US and the entourage worries about hate crimes against the community in light of government change. Given Emyr sends out a pretty strong I’m here, I’m queer, get used to it message – including a dirty little ditty penned for Daddy – his manager, Uncle Barrie, worries about what might happen in the current climate. It’s not heavy-handed just one part of the whole and I personally like something that makes people think in a genre that should never forget the necessity of equality.

The book has moments of pure romance without drama driving it. There’s sexy times. There’s fun times. There’s a changing, strengthening relationship as the book progresses.

The book has moments of pure daddy kink. If you like that there’s plenty to keep you a happy reader.

To the author and editor, thanks for the Commonwealth/UK English, there’s also enough colloquialisms without overkill. 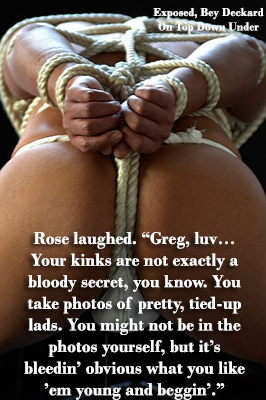 Greg also thinks about the age gap – he’s twenty years older than Emyr so he’s going to give it some thought. Having said that, Emyr could seem older than Greg, maybe because he was younger and just rolled with life more, maybe because sometimes the younger partner is an old soul. Seen it in real life.

Guys in makeup and heels are something I never get sick of. Emyr in the stiletto boots he ends up wearing on stage has significance, but, fuck it to hell, it was simply hot. Add that little photo shoot as well, then sex before an encore? Phew! All the photo shoots, particularly with questions and a specific request by Greg, were hot, ch-click!

Bey Deckard is an interesting writer, I don’t profess to know much about their writing but they seem to mix it up – Max and Exposed are quite different books. I enjoy that. I can also say that the writing overall was tighter in this book than Max so I’m dead keen to see where Bey Deckard goes to next. 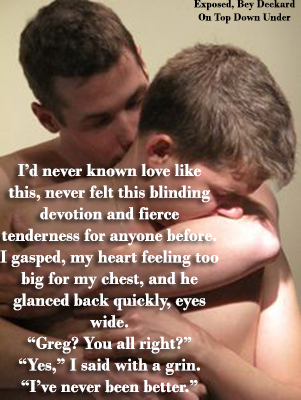 If you like daddy kink in romance as opposed to erotica, this is not erotica – sexy romance, yes – then maybe think about grabbing Exposed, and hang in there. Once the initial meeting/hook-up passes and Greg’s backstory with Travis doesn’t dictate hang-ups and celibacy, the book settles down into a very nice rhythm. Once they’re on tour this book ramps up several notches in pace, chemistry, and organic and sustained heat. Exposed is really sexy and entertaining reading that bucked the trend of my current contemporary romance reading woes. If you generally enjoy contemporary gay romance but maybe you’re not so good on the whole daddy thing, then this is still well worth checking out because it has nice primary characters, a lack of drama, good secondaries, plenty of romance, plenty of hot, hot sex, and a nice ending. Recommended reading. 4 Stars!   Our Tumblr for a bit extra 18+ 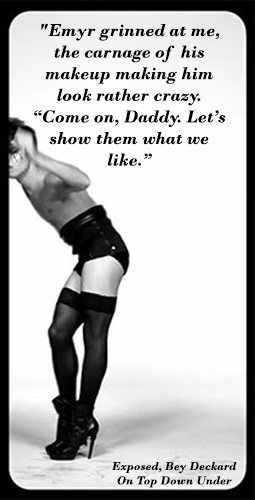 Great review. I love the visuals and the quotes.

I can’t help myself, I see daddy kink and I’m like a moth to a flame 😀
This was really enjoyable and I have yet to add my Tumblr contribution, he he.

This was my first Bey Deckard book and I really enjoyed it. Like Cindi, I love reading about characters with a big age difference and Kazza K and I seem to have a thing for books with daddy kink. 🙂 So, this one was perfect for me. 🙂

I’ve only read two and he’s an interesting writer, Lisa. I’ll be reading some more of him soon. There’s one that looks positively nasty, so of course I’ll read that.

Yes, we’re both confirmed daddy kink readers 🙂 and this is a good one.