As a discovery writer and extrovert, character is at the heart of my creative process. I stop writing a story and start over if I don’t care enough about them or what happens to them. I have to be compelled by the point of view and their problem/desire from the first sentence to spend time and effort on telling their story to myself—I am my first audience. Furthermore, if I don’t understand the characters well enough, I can’t write about their choices in interesting and realistic ways. Here are some of the tips and tricks I’ve learned from books, classes, teachers and pros that help me get going with a compelling character right away.

The first thing I do when I’m drafting anything, from a 300 word micro-fiction to something that will be an 80-100,000 word novel, is freewrite using different points of view: third, first, and second. I think it’s from my years as a roleplaying gamer—I need to hear the character’s voice to understand how to “play” them for so many paragraphs and pages. I’ll start with a few sentences, and if they aren’t sparking my curiosity or emerging with a natural voice, I chuck them and start over. Here are several first-line rejects from a piece of scifi microfiction I drafted yesterday:

Five Things I Know About You

The above works great for short fiction. I wrote six more versions of Beta’s story before I was happy. I’ll probably give it another two editing passes before I submit it next week, just to make sure I am hitting all the emotional points I want to hit and that I still feel confident about it. It satisfies me, and that’s what’s important. However, I need a lot more than a character in a solid setting with a clear desire and conflict to write 100,000 words about them. When I’m working up characters for a novel, I do something much more in depth—I write five things I know about them, each one a tiny story. Here are the ones I worked up for SWIFT FOR THE SUN seven years ago:

Each of these are explored in the 80,000 words of SWIFT FOR THE SUN except for Sun’s aspiration to be a dancer. It didn’t fit, so I chucked it. After I have my list of five, I expand around those—what happened to the character at distinct points in their past, and how did they react to those events? Once I have a solid understanding of their past, I can predict how they will react in future.

What Power Lies Coiled Within?

Finally, I write a seven-point outline, somewhat like those used by scriptwriters. It is very loose (a sentence or two each) and has these prompts:

I’ve used this same seven-point outline for everything from poetry to a novel. It helps me define the dramatic arc and how that arc fits the characters as well as giving me a guide to work toward as I write. Often, an interesting/unique idea will occur to me as I write and I just go with it, returning to the outline later to re-write it, incorporating the new idea.

Again, character is at the heart of each of these, even though the last tip is a plot outline. If you’re having trouble coming up with anything that interests you, try on some character voices, do some free-writing, make up some lists, ask yourself what past events happened and how your character reacted, and then draft a character-centric seven-point outline. Hopefully this will help you get unstuck and create a compelling character that moves you, for however many words the story wants to be.

Swift for the Sun

Benjamin Lector imagines himself a smuggler, a gun runner, and an all-around scoundrel. A preacher’s son turned criminal, first and foremost, he is a survivor.

When Benjamin is shipwrecked on Dread Island, fortune sends an unlikely savior—a blond savage who is everything Benjamin didn’t know he needed. Falling in love with Sun is easy. But pirates have come looking for the remains of Benjamin’s cargo, and they find their former slave, Sun, instead.

Karen Bovenmyer earned a B.S. in anthropology, English, and history; an M.A. in literature; and an M.F.A. in creative writing—popular fiction. Fans of historical romance, Tarzan, Master and Commander, and Pirates of the Caribbean will enjoy this funny, romantic action-adventure. 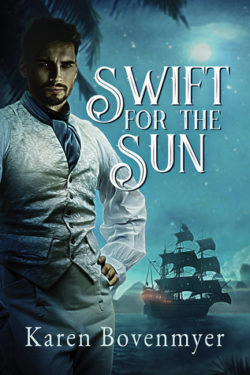 Title: Swift for the Sun

Karen Bovenmyer earned an MFA in Creative Writing: Popular Fiction from the University of Southern Maine. She teaches and mentors students at Iowa State University and serves as the Nonfiction Assistant Editor of Escape Artists’ Mothership Zeta Magazine. She is the 2016 recipient of the Horror Writers Association Mary Wollstonecraft Shelley Scholarship. Her poems, short stories and novellas appear in more than 40 publications and her first novel, SWIFT FOR THE SUN, an LGBT romantic adventure in 1820s Caribbean, will be available from Dreamspinner Press on March 27, 2017. http://karenbovenmyer.com/