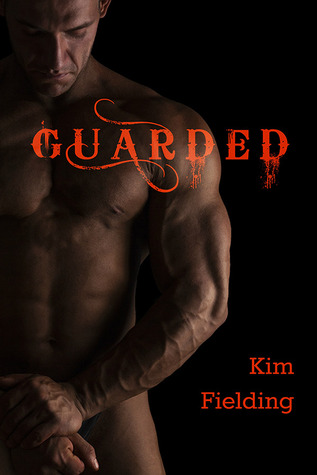 A brutal war left Volos Perun with physical and emotional scars and with a reputation as a hero. Now he’s a soldier stationed at the palace, desiring Prince Berhanu while receiving only loathing in return. But when Berhanu foolishly refuses the king’s request to let Volos accompany him on a peace mission to the neighboring country, Berhanu is kidnapped and brutalized. Now Volos must risk his life as he works to save Berhanu and help his country avoid another devastating war.

I read The Sacrifice and Other Stories by Kim Fielding late 2015. It’s an awesome anthology and all proceeds are donated to the fantastic organisation Doctors Without Borders/Medecins Sans Frontiers. I had little time to review at the time of initial reading but I’m slowly rereading them and trying to put up different stories on the blog. Guarded has a sexy cover so I decided to add this as a standalone but others may well be lumped in together under the actual anthology. Think about buying the anthology (it’s not expensive) because the book supports such a  worthwhile charity. Maybe now more than ever we need the brave and amazing Doctors Without Borders.

King Tafari has organised for his son, Prince Berhanu, to travel to Kozar to help ensure a pact between Wedeyta and Kozar is forged. The smaller Wedeyta is under threat from a neighbouring nation and the Kozari Queen’s support means strength and trade for Wedeyta. The King wants his son to take Volos Perun as both translator and his guard but Berhanu is irrationally angry at his father’s choice and refuses, preferring to take a female academic instead. Volos doesn’t know why the Prince so overtly despises him, why he spars with every other palace guard but Volos. Why he’ll joke with others but avoid, even sneer at, Volos. Why he’d rather risk his life with the aggressive guerrilla militia, the Juganin, in Kozar than take Volos’ military training and skill as a guard for  protection. It also flies in the face of logic that Berhanu would refuse a native Kozari speaker as his translator.

The worst case scenario occurs; Berhanu is captured, tortured and gang raped by the Junganin. His translator is murdered and the body discarded. Because of geopolitical reasons, because it’s a peace mission, Volos is sent in on his own to find and rescue Berhanu – if he’s still alive – and bring him home. It’s a mission Volos is prepared to undertake without any offers of recompense for the danger involved. The King and his oldest son, Prince Chidehu, both respect and admire Volos and treat him well. For some perplexing reason that only the heart knows, Volos has long desired and wanted Prince Berhanu.

This is a very well written novella and the time absolutely flew as I read it. It has action, excellent world building and most of the characters are incredibly three dimensional and dynamic, even secondary characters. Where this book lost a half a star from me is because I wanted Berhanu’s POV, even if it was for one chapter. I couldn’t really get a total handle on why Volos was so utterly desirous of Prince Berhanu. It’s a bit of an understatement to say that the prince isn’t easy to like initially. Without his POV Berhanu’s behaviour from the outset seemed entitled and xenophobic. It appeared he didn’t like Volos because of his Kozari heritage. Because they fought the Kozari. However, Volos has his own demons – his family were killed during a war with the country he now fights for, Wedeyta, and Prince Berhanu is one of the ruling family. Volos can see the good and the bad on both sides. Berhanu, not so much. However, the prince does get a reality check and settles down in the second half. At one point it was pretty easy to think that Velos would be better served in a relationship with Mato, a Kozari who kindly helped him out when attempting to free Berhanu from the hands of the Juganin. What a bright spot Mato is. He restores your faith in people.

“They’re holding a prisoner. They’re hurting him. Eventually— maybe soon— they’ll kill him.”
“And you’re here to free him?”
“Yes.”
“By yourself?”
Volos sighed. “Yes.”
“Is he your lover?”
Volos laughed bitterly. “No. He despises me.”
“Then why risk your life for him?”
A simple question with complicated answers. Volos settled for one of them. “It’s my duty,” he said quietly.

It is a simple question with complicated answers. Quite obviously the reader knows what Volos is doing is more than a sense of duty but the answer is technically correct – he is a man of honour and his word and, thankfully, so is Mato.

Guarded is a book that’s well and truly comprised of two halves. The first half is more action packed, it’s more rough, including a rape that isn’t detailed so much as written in an emotionally impactful manner, and the world building and characters – particularly Volos – are established. The yearning of one man for another who doesn’t seem to reciprocate those feelings has real depth. The second half expands upon the world building and the relationship between Volos and Prince Berhanu – they smoke things up. There’s the journey’s continuation for both the Prince and Volos to meet with the Kozari Queen. Berhanu wants to ensure a diplomatic pact is forged between Wedeyta, and Kozar. There’s also more (hurt/comfort) romance occurring in this half.

There is plenty behind the words in Guarded. Before I knew it I found 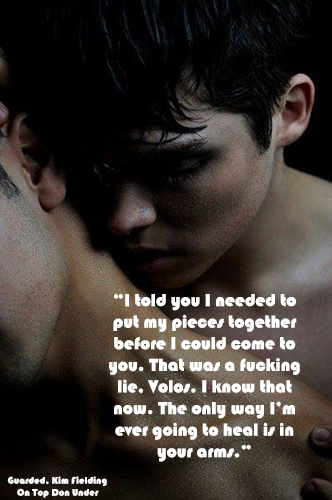 myself absorbed into the story and the writing. From the start it was building into something good, the characters grabbed me and made me feel connected, and I shared their passion. Even when I initially thought Berhanu was not worthy of Volo’s affection, Volos knew he was.

Guarded is an absolute page-turner of a read, the fantasy elements are excellent, the world well drawn, and Volos is a dream main character. In spite of himself, I ended up liking Prince Berhanu. There’s some desirable slow burn going on, some hurt/comfort, and there’s also a more than satisfying ending. That Kim Fielding always seems to sneak up on me, that she packs this much feeling and storytelling into 115 pages is a testament to her writing prowess. Guarded really is damn good reading. 4.5 Stars!

This looks like an emotional read. The quote you used in the photo… aww. I love that. Great review.

It’s a really good read and I like Kim Fielding’s fantasy stories a lot. Thanks, Cindi 🙂