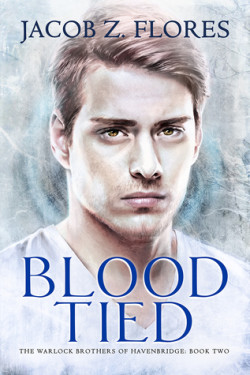 Thad Blackmoor’s heart is as cold as his icy magical abilities. He considers emotions a waste of his time and prefers to study the arcane, using the sacred books of his coven to grow in his craft. He aspires to supersede his father and elder brother Pierce in power, and now that his younger brother Mason has tapped into the rare warlock power of darkness, he needs to work harder than ever.

But Thad’s ambitions are halted when he saves Aiden Teine, a fire fairy, from a banshee. Thad’s immediate attraction to Aiden catches him off guard and thaws his cold heart for the first time. As Thad, Aiden, and his brothers investigate the connection between the banshee attack and the vampyre and shadow weaver who almost killed them, Thad tries to dodge Ben, a sexy warlock who won’t let him be after a one-night stand.

Their search leads them to the Otherworld, where something even more insidious is at work—something Thad will need more than logic to stand against.

First off, I loved the cover. After reading Spell Bound I knew right away that I would love the heck out of this book. Jacob Z. Flores writes a stunning story. He’s just one of those authors you feel you know, like a long-time friend.

The Blackmoor men command authority of the elements while their job in Havenbridge is to guard the ‘Gate’. Being the middle child meant Thad often felt overlooked. Especially as Pierce (the oldest Blackmoor brother) who used his physical strength and developed his ‘active powers’ early, while Thad’s active powers hadn’t made an appearance until much later. It was his mother who had mentored him, believed in him, and now that she was gone Thad had become more the aloof, silent type. His ability to command ice was rather apt, since that was how you would describe Thad: cold. Their youngest brother Mason had recently come into his powers as a Shadow Weaver. (In book one) And their father gathered his strength from the earth, manifesting as rock.

The story follows on from where Spell Bound left us, with the Blackmoor men having defeated the vampyre who killed Drake’s Aunt. Thad is studying the final chapters needed to complete his Doctorate in Witchcraft at Salem University, and it’s Halloween – “Samhain” – a sacred event for honouring their dead, and time for Thad to be home.

The story kicks off immediately with the introduction of Ben Crane. He’s definitely a Warlock and someone Thad would have no doubt about bedding for a night but Thad needs to get home for Samhain. Ben’s a cocky SOB, well versed in the art of seduction. It was delicious and inviting reading their interaction…I wanted more. Ben made Thad want to lose control, let go of his long held onto Warlock instincts. I wanted him to lose the straight-up self-control. But there was definitely something about the very sexy Ben that made me look for more…Who was he? Why did this Warlock suddenly show up and come on to Thad so forcefully?

Where my father, Pierce, and now Mason had found their strength in their hammer strikes, mine would come from a source previously untapped by any warlock. I’d grown from restraint and knowledge, not brutish power plays. That would ultimately make me the most powerful Blackmoor of them all.

Thad is stunned at his own behaviour, he doesn’t relinquish control and here he was opening his mouth, begging for more. They’d just met. The night passes, and morning comes with a phone call from his older brother Pierce wanting to know why he’s not home for Samhain. Thad is clueless to how he slept through the night when all he intended was a short nap after seeing Ben out.

Imagine his surprise when his brother Pierce introduced Ben to the family as a business associate who’s to share Samhain with them.

Thad is understandably riled at the sight of Ben at his family home, but he had also fought off an unknown evil force on the road in to his hometown and brought home “Aiden” who was under attack from whatever was out there. Thaddeus had not had time to explain this to his family, as they now have guests and rituals to partake in for the Samhain ceremonies.

Aiden is a fire fae Prince; son of King Oberon. His kind live in Otherworld and he passed through the “Gate” trying to fend off the evil that was attacking him when Thad was driving home. Thad and Aiden have an immediate connection. His kind are responsible for keeping the home hearths burning and igniting creativity and passion. Aiden was definitely not what humans pictured a fairy to be, he was at least six foot three, and muscular, not thin or effeminate. Oh, and extremely comfortable in his own skin. Did I mention in his skin only? Yep, he loved to get around naked. What a trial that must’ve been!

Thad has to choose and the decision was made the moment he met Aiden, it seemed. Their lives are worlds apart – literally. Aiden’s world is under attack, it was part of the job for Thad’s family to guard the safety of the gate. There are elements of the magical world that operate on the evil side – much like they do in our human world. It’s a fight between good and evil. Who will win? Aiden is able to pinpoint the exact emotions Thad had kept guarded from everyone, and break down the tough exterior that hides his heart. Their love is chivalrous, sweet and all consuming. It seemed they would do anything to protect each other. But when evil takes its hold, will their love withstand the strength of evil’s grasp?

My touch still worked its magic on him, just the way his did on me. It made me smile every time my kiss or embrace calmed his nerves. It only supported the argument my heart had already concluded.

Overall I give Blood Tied 4.5 stars. The writing is supreme, the story is an intricately woven idea that intrigued me, brought me in from the beginning. There was so much at stake, so much they didn’t know. What a sweet soul Jacob Z. Flores is, men can be strong and show weakness but through that weakness strength shines through. Loved that!

I always appreciate the humour in sibling rivalry, and these Blackmoor men do it well. I love how they speak to each other. It’s often the case when men get together, they hang shit on each other – it’s how they show their love. Almost as if the bigger the insult the higher they are regarded, and Jacob Z. Flores knows how to sling his words.

This ARC was supplied in exchange for an honest review.

Glad you liked this book, too, Judy. That is also one fine cover 🙂